I Also have a 2006 Dodge Charger RT
that’s doing exactly the same things
everyone else’s is doing I never had
any issues like this with my car until
now the antifreeze is boiling in
Reservoir Container I’ve replaced
thermostat TWICE!! The water pump
Flushed out twice and just changed
radiator and after changing it I fill up
the reservoir container with antifreeze
so I can fill up the new radiator with
antifreeze but after filling it up I
haven’t felt no antifreeze going
through the hoses so I then replaced
radiator cap But STILL!!!!
OVERHEATING!!! after about 10
minutes But still doesn’t blow out
heat at all   I have ran through too
much money on antifreeze in the past
2 weeks does anyone know what this
could BE!!!! 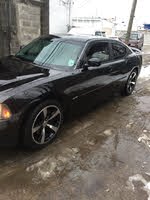 Thanks for the help lol