Sudden Acceleration of a 2012 Kia Sportage

Sudden, involuntary acceleration has happened on our 2012 Kia Sportage, I was unable to
control it and crashed into a concrete wall and parked car while parking and applying the
BRAKE. FORTUNATELY no one was injured however there is a lot of damage and the
airbag deployed, this incident happened on 9/16/2013 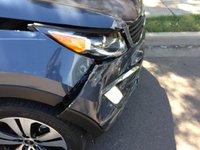 MY 2008 SPORTAGE HAS DONE THIS 3 TIMES AND ALL W/I A PERIOD OF 2 HOURS. I FLAT BEDDED IT TO THE DEALER AND THE DEALER SAYS THERE IS NOTHING WRONG AND WANTS ME TO COME PICK IT UP. IM SCARED TO DRIVE IT AND HAVE TOLD THEM SO. HOW COULD THERE BE NOTHING WRONG. IT HAPPENED 3 TIMES AFTER ALL. SO FAR THE DEALER IS NO HELP. I AM STUCK DRIVING A RENTAL CAR AND IT WOULD APPEAR THE DEALERSHIP JUST WANTS IT OFF THEIR LOT AT THIS POINT. I HAVE REACHED OUT TO CUSTOMER AFFAIRS IN HOPES THAT THEY CAN ASSIST. IF NOT I HAVE NO CLUE AS TO WHAT TO DO NEXT SHORT OF TRADE IT IN AND GET A NEW VEHICLE WHICH DOESNT SEEM FAIR. MY SPORTAGE HAS 32000 MILES ON IT AND IS PAID FOR. I SHOULD BE ABLE TO DRIVE IT NOT BE SCARED OF IT.

This happened to us with our 2014 Sedona.yeasterday.(Apr. 13, 2014) The car has less than 3000 km on it. I was stopped at a light four to five feet from the car ahead. My foot was rsting on the brake and the van was idling smoothly. The engine RPM's started audibly climbing at which time I prerssed harder on the brake. I had it jammed tot he floor and I still couldn't stop it. The van surged forward, picking up enough speed in theat four to five feet to that, when it hit the car ahead, it pushed the trunk lid up about three inches and push the front through the rad. I went to see the dealer today a nd so far it was a total waste of time. All I was asking was some acknowledgement that they had some responsiblitiy and that I had not just decided to ram the car in front of me because it seemed like a good idea. Instead we talked in circles that avoided any recognition that there might be a problem.

This has happened to our 2005 Kia Sportage now 3 times, and the las time resulted in a minor accident. We will not feel safe driving this car again ever, and we won't!

And, the local Kia dealer nor the Kia customer affairs really wanted to be of any help. They maintain it was driver error. 3 times? I don't think so!

The gas pedal is no longer connected to the engine on Any car made by Anybody.  Now the gas pedal talks to the computer and the computer talks to the engine.  Kia (and many others) have programed their computers to change the speed of the engine whenever they want - Without the drivers Permission.   It is not a problem with any component of the car (therefore waste of time & money replacing any parts), it is the Design Flaw [of the computer taking over control of the engine] combined with an Assembly Flaw, that can cause 'computer confusion' under rare varying environmental conditions (and therefore impossible to replicate or diagnose).  Over a period of time Temperature & Humidity may cause condensation to form inside Certain electrical connections Intermittently shorting out a Combination of signals to the computer - if this causes the computer to Think it needs to prevent a stall, it doesn't care if there is even a driver in the car - the computer Takes Control of the engine.

Looking for a Used Sportage in your area?