I have a 1985 Ford Thunderbird that
is idling very high.  It will get up
30+mph without me using the gas
pedal. Any suggestions on what
might be causing this or how to repair
it.

GuruBT3LW answered about a year ago

GuruBT3LW answered about a year ago

Ed, a vaccum or intake leak would be a constant flaw, the idle would not fluctuate unless the iac system was trying to balance it out, the iac valves on that generation of Ford products were known to fail. He has a 1985 Thunderbird, with Ford only obd 1. Auto part stores do not have readers that can scan those codes unless he PURCHASES one (actually a good idea), and they have no data capability, only the ability to read codes, which there are probably none of. The part store monkeys will only be able to sell him several hundred $$ worth of parts for no reason. It's an older car, check the basics first. 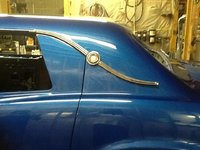 Looking for a Used Thunderbird in your area?