An older, trustworthy coworker is selling his 2004 Nissan Frontier. He claims he's had all regular matience done on the truck and has only used fully synthetic oil every oil change. He also says he's recently dropped a new tranny and clutch into the truck. Here's the catch --- the truck has 207,000 miles on it. He's asking $2,500, which is all I can afford right now. Should I spend the money despite the high mileage? 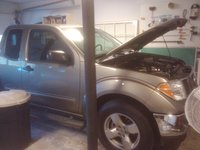