gear change misfire and over rev...

i have a honda civic 1996 dx automatic transmission... did a recent check on spark plugs and
put ATF on the gear chamber... just wondering, it's already misfiring and first gear is short then
over revs. after that, it's taking too long to engage on 2nd gear (too much rev with no push)... i
put regular atf on it and let it sit overnight before driving... i just discovered it this morning on my
way to work... what seems to be wrong and what should i check? 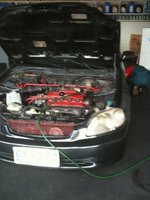 Only answered 8 years ago

short first gear then high rev when switchng from 2nd to 3rd but no traction... should i drain the atf and let it run with no dipstick/cover for a few minutes so it will loose the vacum, or do i just drain then replace atf? its a little bit higher than the standard fill...

i checked the transmission but didnt find any leaks... im beginning to think it has something to do with the sparkplugs because i got new ones... might be because it's burning too much fuel and the stock transmission cant handle it...

just solved the problem.. i did what i said in the first reply, open the lid and let it stand for a few minutes... then drained it, the next day put new ATF and it works perfectly fine...

Only answered 8 years ago

then again, Only... maybe not... just found out there is "actually" a huge hole and a frickin leak because it misfired a couple of times again and i put half a quart of atf... so i sent it to a local shop and have it fixed... they said the reason was probably the under chassis and under side of the engine might be hitting some rocks or small potholes on the road, i said "sometimes, yes." and the fact that the front suspension was dropped, i also kept on hitting short and tall humps especially when i have a passenger seated at the right front side where the transmission is mounted... tough luck... i say this sucks LOL!!!

Looking for a Used Civic in your area?