Where do the "fuel injected" emblems go on a 1987 El Camino?

I just had my 1987 El Camino repainted. They removed all the emblems and I bought new ones to replace them. I cannot find a picture which has "fuel injected" emblems and do not know where they need to go. I am guessin the front but cannot find any pictures.

Have you looked on line at pictures of 1987 El Caminos? Do a FI search and see if they even had them. Front fenders?

I could not find a picture with the fuel injection symbols. Hard to find any pictures of an 87 with any emblems. I know it had them because they took them off and gave them to me. The car was original, I am the only owner.

If you are the original owner, do you have any old pictures of the truck? That may help Let me look and see what I find.

I found three pictures. The hood on a SS (Super Sport) had a raised center hood. On the back of the raised part was the words in chrome lettering, "fuel injection . I'll post all three. 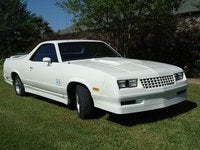 Number three, hope this helps. Hard to see but it is there.

I could not find any old pictures showing the fuel injection emblem but on another search of pics on google, I found one with fuel injected located on the rear tailgate, upper left. Thanks for your help. I never took a picture of the back of the car.

Doing further research, that may be Cowl Induction on the hood. FI was on the option list since 1955 according to GM. I looked at a lot of pictures of 87, all of which were Mexico made, and none had Fuel Injection markings on it even though they were. There were several after factory shops that did body modifications before delivery, including one that put a Chevelle SS facia on the car. I can't even find any FI marking on the Chevelle. So If the markings don't go on the hood as in the pictures, I couldn't find any unless they were after market put on at the factory or dealership?

Here it is. Apparently only in one spot 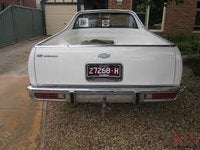 Interesting on how many different engines were offered throughout the years. They are great looking vehicles. Enjoy yours. Here is a picture of my 69 Vette. Original owner.

My 87 el Camino has it on the upper left hand corner of the tailgate.

Looking for a Used El Camino in your area?

CarGurus has 3 nationwide El Camino listings and the tools to find you a great deal.