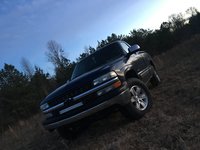 You can put any engine in anything you want to move, if you have the knowledge to do so. Look the parts you think it may affect. Like the drive shaft, look up the specs and models and trans that it will fit. You need to do a lot of research if you are doing this yourself. I can't tell you if you can. You also might look at what would be cheaper, rebuild your engine or get a crate engine, compared to buying a bigger engine and have to deal with running into one problem or another. There are so many things that need to sync together and if they don't or won't, you have wasted a lot of money. There is no simple answer.

GuruXBGJ9 answered about a year ago

Eddie answered about a year ago

Why are you changing the engine, did it die or are you just trying to get more power. If you are doing it to get more power, it is not really worth all the research and the work to change it. If you just want more power, look up what accessories you can get for that engine. Secondly if it died, it would be best to find out why it died, as you could run into the same problem down the road. If it was just worn out, Chevy has been coming out with some great grate engines. I have a 2003 with same motor and it runs great, but before I bought it used with only 130,000 miles in 2016, it's a LT but fully loaded and everything works which is a first for me. But I did a lot of research of what kind of problems I could run into. I research everything on the computer, and read the reviews before I buy what I want. And when it comes to vehicles these days, there are no stupid questions, as there is so much crap in them any more, the problem you might be having is being caused by something else that you wouldn't think it would be the problem. If you know other people that have a vehicle like yours, ask them if they have had any problems always good to know before hand what may come in the future. Hope that helps.

Looking for a Used Silverado 1500 in your area?