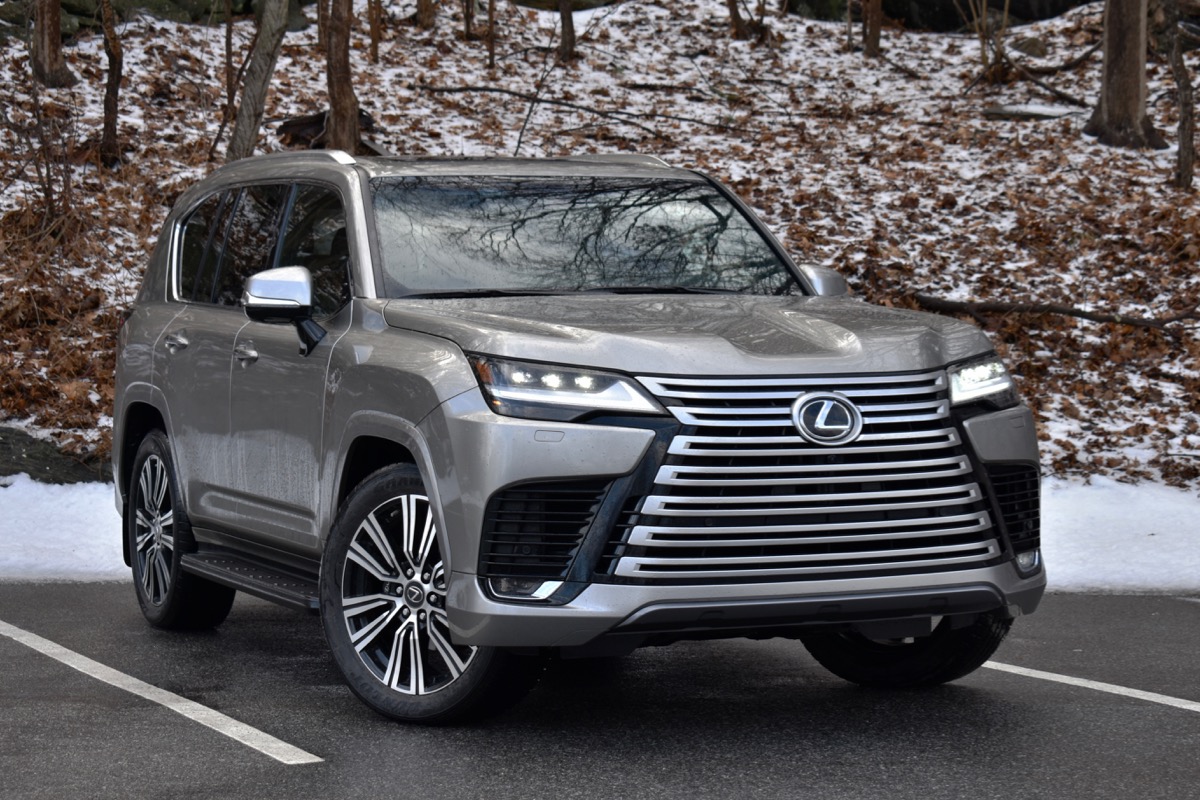 Looking for a New Lexus LX in your area?

The Lexus LX is a flagship SUV within the Toyota range. For 2022, it gets a long overdue redesign. 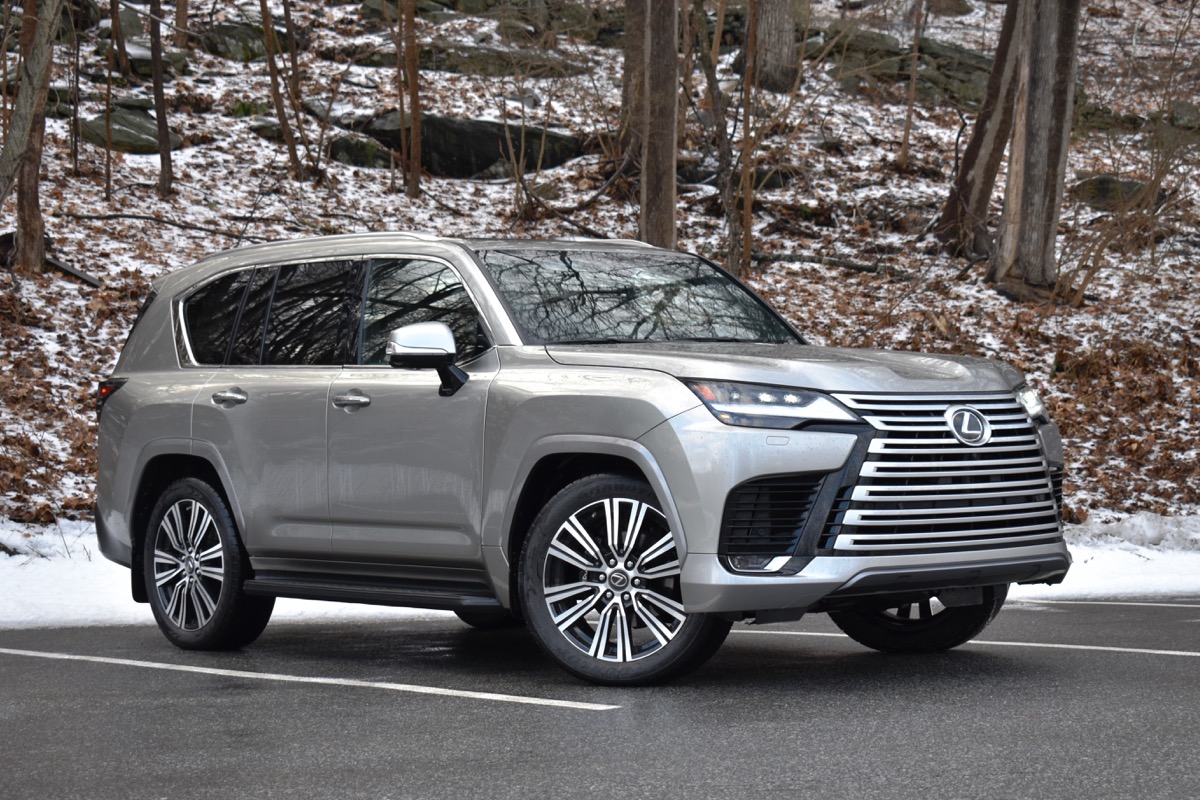 Launched in 1995, the original Lexus LX was one of the first luxury SUVs, competing with the Land Rover Range Rover and paving the way for modern rivals like the Cadillac Escalade, Lincoln Navigator, Infiniti QX80, BMW X7, Mercedes-Benz GLS-Class, and the revived Jeep Grand Wagoneer. But while all of those SUVs are fairly fresh designs, the LX hasn’t been redesigned in almost a decade.

So, the fourth-generation 2022 Lexus LX 600 has been a long time coming. The redesign brings a new platform, updated infotainment and driver-assist tech, and a new twin-turbocharged V6 engine, among other things. Like all previous LX generations, it’s based on the Toyota Land Cruiser. Toyota isn’t bringing the latest Land Cruiser to North America, however, so the new LX won’t have to deal with sibling rivalry anymore.

In Canada, the 2022 Lexus LX 600 launches with optional F Sport, Luxury, and Executive VIP packages. We spent a few days with a range-topping LX Executive VIP to see if this once-revolutionary full-size SUV is worth spending money on today. 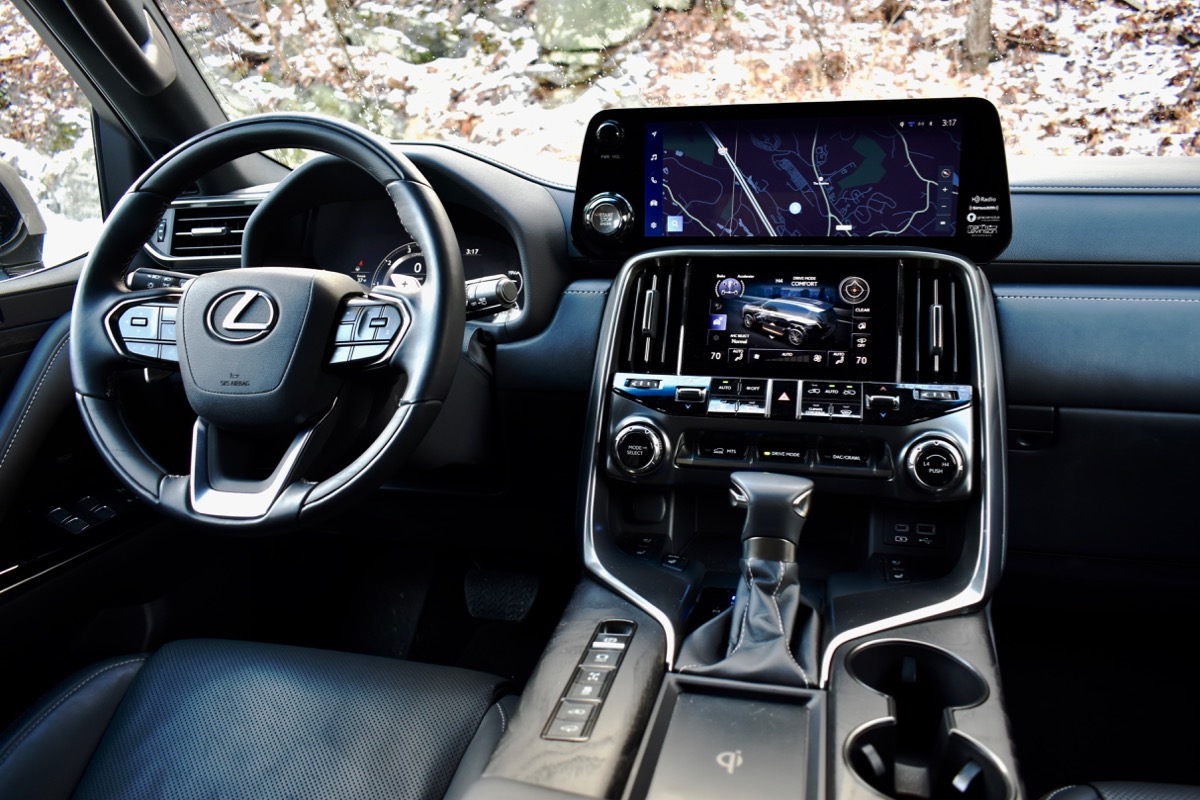 The 2022 Lexus LX shows the benefit of a clean-sheet redesign. The previous-generation model’s styling slowly evolved over time, adding new elements that didn’t necessarily work with what was already there. With the 2022 LX, everything is nicely integrated. The controversial Lexus spindle grille no longer looks awkwardly grafted on, for example. However, that doesn’t make the LX a styling knockout. Aside from that massive grille, it’s a generic SUV with less personality than the Lincoln Navigator, and it lacks the elegance of a Range Rover.

For the first time ever, the LX also gets an F Sport package. Similar to the F Sport versions of other Lexus SUVs, the LX 600 F Sport adds some sporty styling elements without the mechanical upgrades full-fledged Lexus F performance models get. In this case, that means a black mesh grille and model-specific 22-inch alloy wheels on the outside, and an F Sport steering wheel, shifter and sport seats on the inside. Ultra White and Black exterior colours are exclusive to the F Sport model.

As before, the LX uses body-on-frame construction to enhance off-road and towing capability. The new GA-F platform is 20% more rigid than before, and it helps make the 2022 LX up to 200 kilograms (441 pounds) lighter than its predecessor, according to Lexus. However, the automaker still quotes a 2,660-kilogram (5,864-pound) curb weight, and unibody SUVs like the Range Rover, BMW X7, and Mercedes-Benz GLS-Class will always have the edge in refinement.

The interior had suitably luxurious materials, including standard leather upholstery, but with a drab and utilitarian design. It seemed like Lexus’ designers had a pile of screens, switchgear, and trim pieces to install and didn’t know what to do with them. Even the wood trim and ambient lighting seemed like a weak imitation of that you get in a modern Mercedes interior. 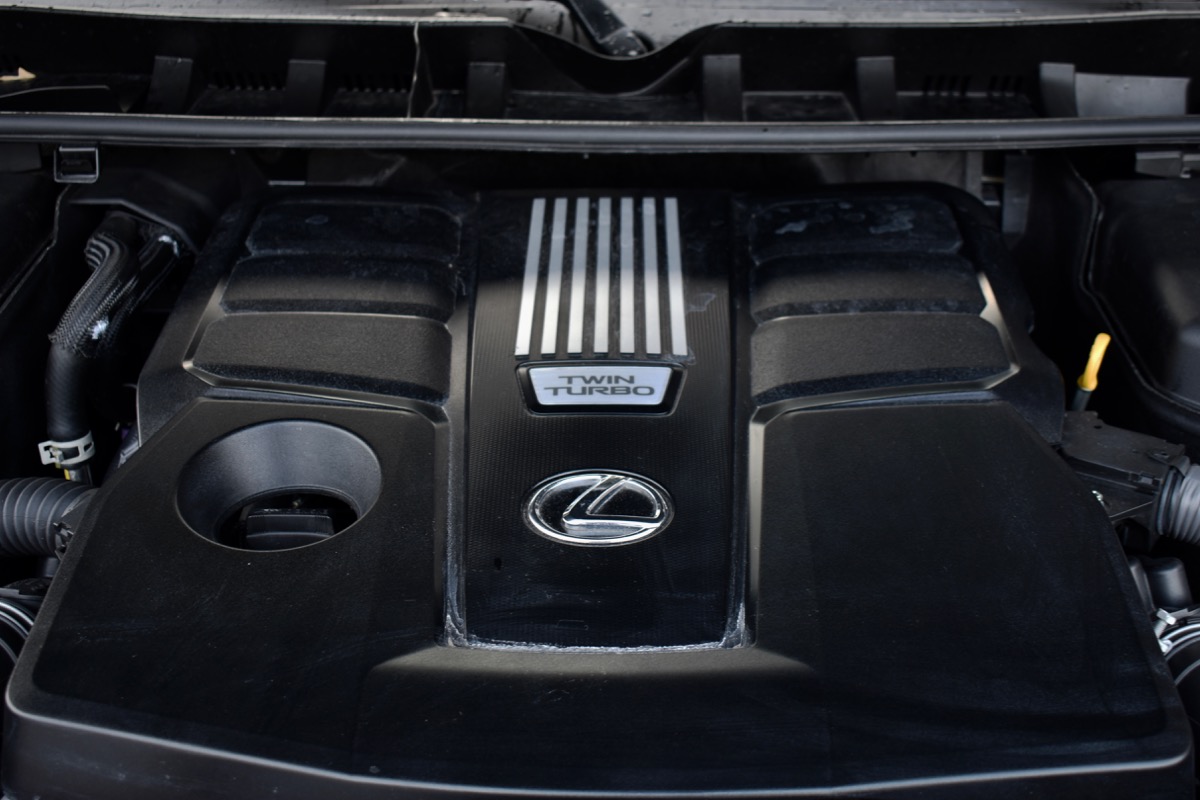 One of the major changes for 2022 is a switch from the previous-generation LX’s naturally aspirated 5.7-litre V8 to a 3.5-litre twin-turbo V6 shared with the Toyota Tundra pickup truck. Coupled to a 10-speed automatic transmission and standard four-wheel drive (4WD) with low range (F Sport models get a Torsen limited-slip differential), the V6 makes 409 horsepower and 479 pound-feet of torque. That’s 26 hp and 76 lb-ft of torque more than the 2021 model’s V8.

That translates into a quicker zero to 60 mph time of 6.9 seconds, compared to 7.3 seconds for the 2021 model, according to Lexus (0 to 100 km/h times are not published). That’s still about a second slower than a base BMW X7 or Mercedes-Benz GLS-Class, but we doubt many owners will be drag racing their full-size luxury SUVs.

The revamped powertrain is teamed with a chassis that emphasizes both on-road comfort and off-road capability. In service of the former, Lexus equips the LX with standard adaptive variable suspension and optional Active Height Control suspension. The latter can automatically raise or lower the ride height, jacking it up for off-roading, or allowing the LX to hunker down for highway driving. It even has an extra-low setting to make passenger ingress and egress easier.

On the road, the LX exhibited impressive ride quality and body control. It was as comfortable as one would expect a flagship luxury SUV to be, but not so softly sprung that it jiggled over bumps like a waterbed. We did notice some shudders owing to the disconnect between the body and chassis, but it was no worse than other body-on-frame SUVs like the Infiniti QX80 and Lincoln Navigator. Our Executive VIP test vehicle’s handling was about as far from sporty as you can get, but still confidence-inspiring.

Typical for a modern SUV, Lexus also included some tech features of off-roading. Multi-Terrain Select includes six drive modes (Auto, Dirt, Sand, Mud, Deep Snow, and Rock) for different surfaces, Crawl Control essentially acts as low-speed off-road cruise control, and hill-descent control is included as well. We didn’t get to test out these features during our time with the LX, but they’ve worked satisfactorily in Toyota models we’ve driven. Given the LX’s low-range 4WD and ample ground clearance, we don’t doubt its off-road credentials. 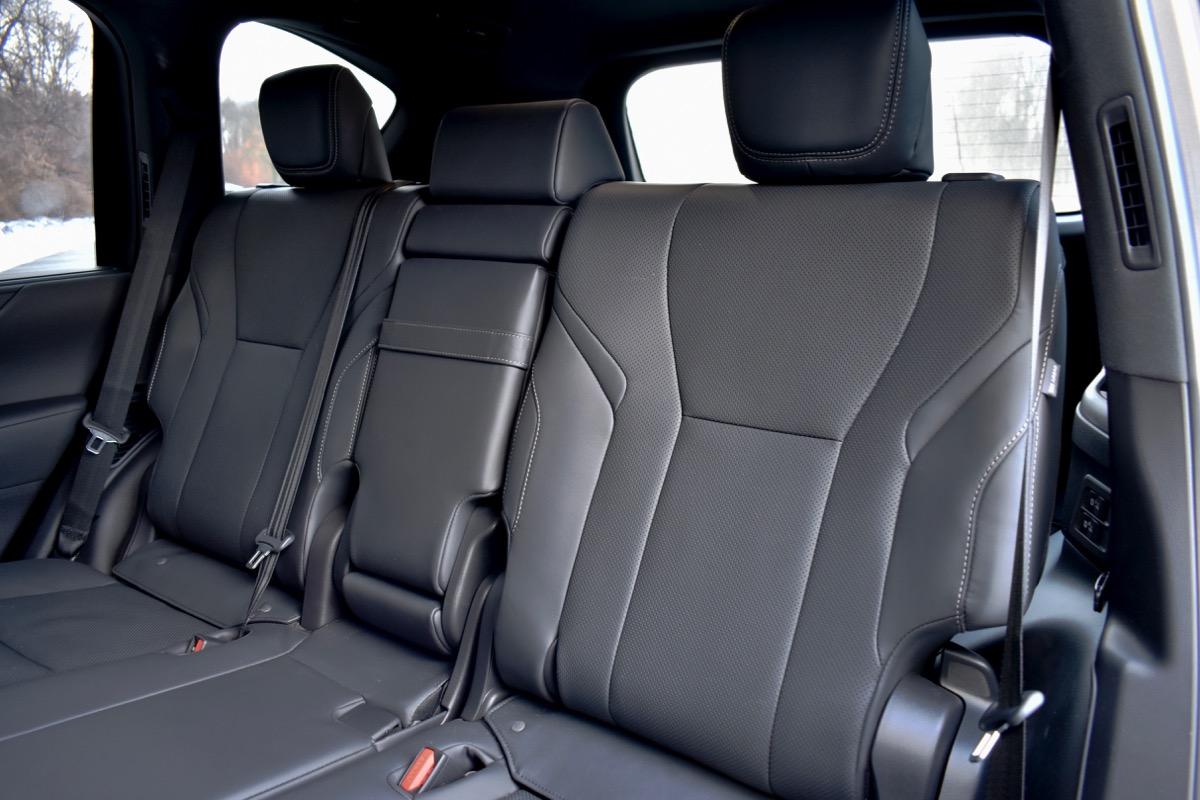 The new Lexus LX has the same 2,865-millimetre wheelbase as the first-generation model that debuted in 1995. Lexus claims this offers the perfect balance of interior space and compact exterior proportions, which help enhance the LX’s off-road capability.

The previous-generation LX was well behind its rivals on interior space, and the 2022 model doesn’t really change that. Most models have three rows of seats, with either a second-row bench or captain’s chairs. Legroom in all three rows is significantly improved—with front legroom surpassing the BMW X7 and Infiniti QX80—but it’s far from segment-leading. Headroom in all three rows remains back-of-the-pack. However, this is still a very large and spacious vehicle. It’s just that competitors offer even more space.

It’s the same story with cargo capacity. Fold all but the front seats, and the LX offers 1,871 litres of cargo space. That makes for a fairly large cargo area, but it’s still far behind the 2,692 litre offered by the Infiniti QX80. A Lincoln Navigator, meanwhile, can swallow a claimed 2,925 litres of cargo behind its first-row seats.

With all three rows in place, cargo space is reduced to a paltry 311 litres. This is a problem with all three-row vehicles but, again, rivals offer more space in this configuration. Lexus does offer a power tailgate and standard power-folding third row seats, as well as the option to ditch the third row entirely, which might be worth considering if you won’t be using those seats daily.

For those able to be driven rather than drive themselves, though, the LX Executive VIP is available in a four-seat configuration with a reclining second-row seat capable of 48 degrees of recline. In this configuration, the front passenger seat can also fold forward and deploy a footrest for maximum spaciousness. It’s not the most efficient use of space, but definitely ups the luxury factor.

Lexus also quotes a maximum approach angle of 27.4 degrees (with Active Height Control at its maximum height), a maximum 26.3-degree departure angle, and up to 20 cm of ground clearance. That makes it unlikely that you’ll get bodywork caught on anything while off-roading, but these numbers still lag behind the outgoing 2021 Land Rover Range Rover (a redesigned 2022 model is on the way).

However, the LX’s short front and rear overhangs, flat hood, and slab sides also come in handy on pavement. The same elements designed to make the LX more off-road capable also made it surprisingly easy to park (a surround-view camera system also helped). 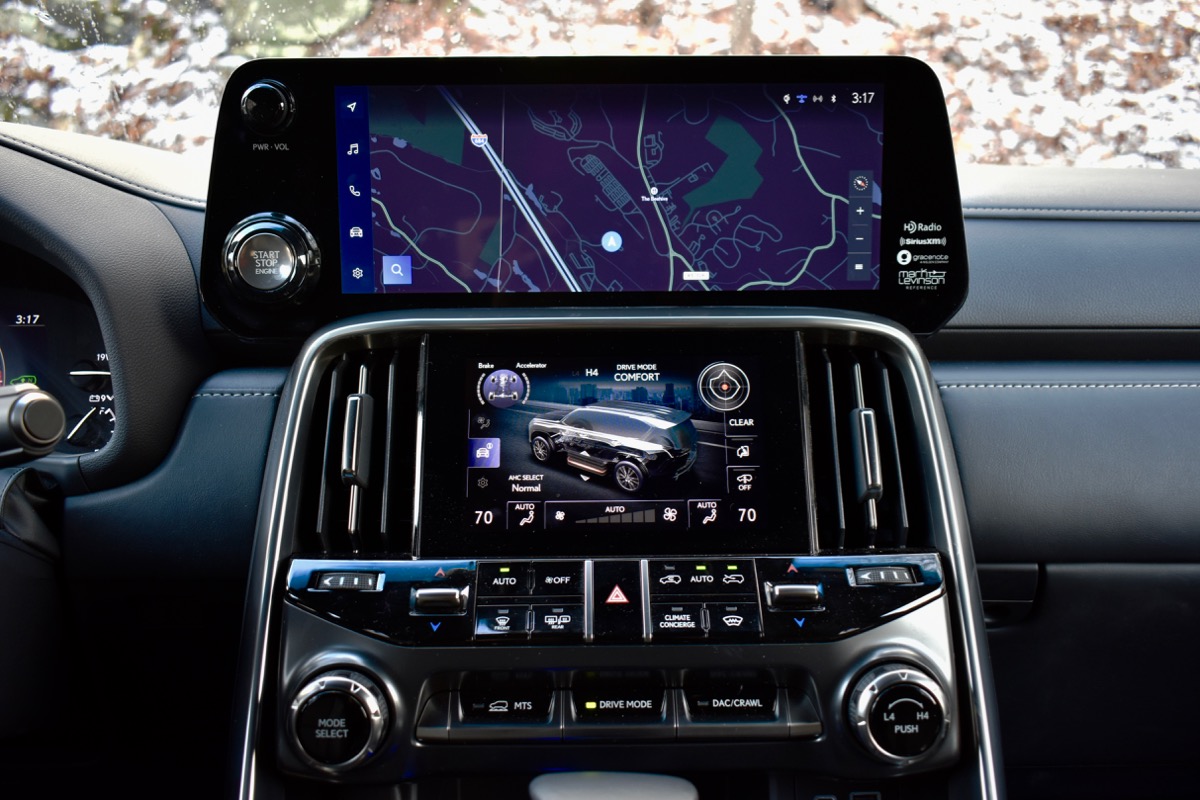 Putting off a redesign for so long meant the old LX fell way behind on tech. In contrast, the 2022 model gets a dual-screen infotainment system, with a 12.3-inch upper touchscreen and 7-inch lower touchscreen in an unusual nested arrangement. Wireless Apple CarPlay and Android Auto, Bluetooth, SiriusXM satellite radio, a built-in cloud-based navigation system, and wireless phone charging are standard as well.

On top of that, you can add a rear-seat entertainment system with dual 11.4-inch screens for the second row, a head-up display, and a 25-speaker, 2,400-watt, Mark Levinson Reference Surround Sound audio system from the options list.

The Lexus infotainment system isn’t as slick as those of its German rivals, nor does it offer the wow factor of the Cadillac Escalade’s 38-inch driver display, or the utility of the Jeep Grand Wagoneer’s available front-passenger screen.

The cluttered screen menus, combined with a larger number of physical buttons on the dashboard and centre console, also made it difficult to figure where to go for certain functions. For example, it was hard to tell at a glance from the on-screen graphics whether the vehicle was in high range or low range, and switching drive modes involved a process of trial and error.

However, we did like the natural-language voice recognition system, which was pretty good at interpreting normal speech. The German luxury brands have had similar systems for some time now, so it’s good to see Lexus catching up. The LX also has four standard USB ports (six optional), and a massive wireless charging pad that should easily fit any phone. 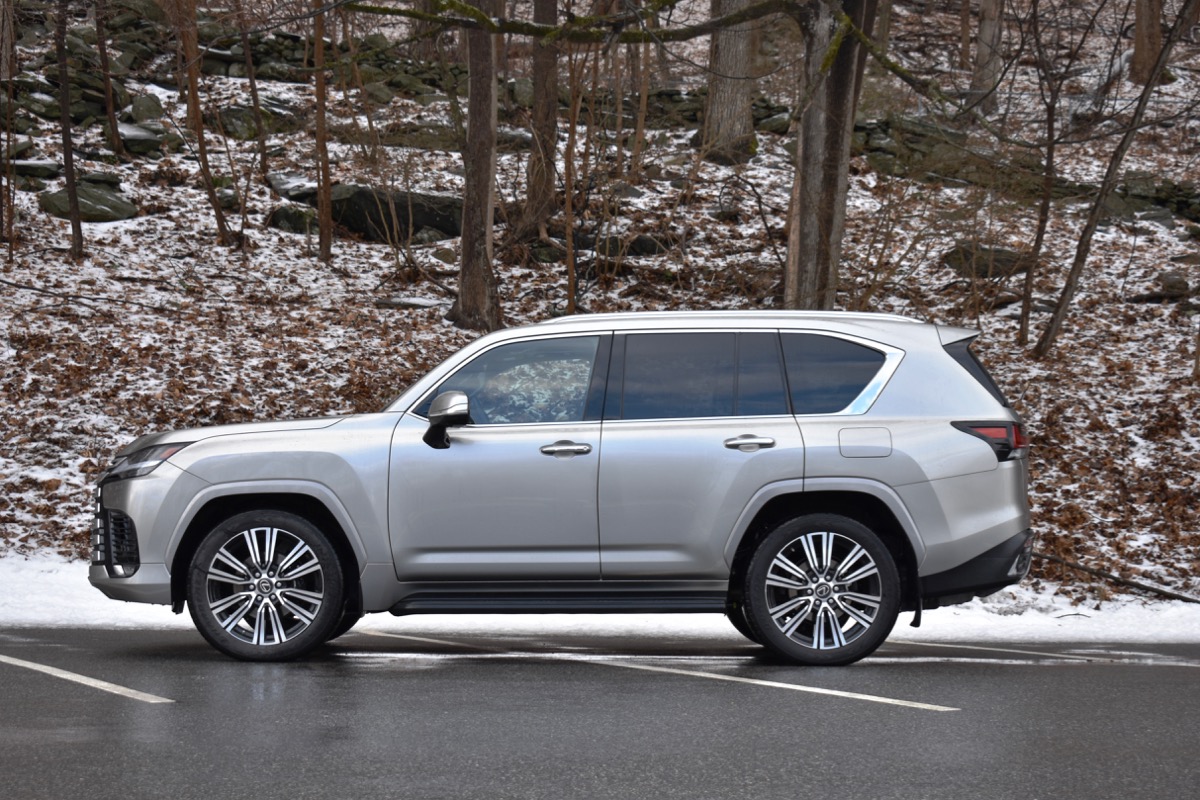 While Lexus tech is very capable in low-speed urban driving (in some situations it can tell when an oncoming vehicle is making a left turn, Lexus claims) the LX doesn’t offer an equivalent to the hands-free Super Cruise system available in the Cadillac Escalade, or the ActiveGlide system launching in the Lincoln Navigator for the 2022 model year.

Crash-test ratings from the Insurance Institute for Highway Safety (IIHS) and National Highway Traffic Safety Administration (NHTSA) weren’t available at the time of publication. That’s not unusual for newly launched vehicles, but luxury cars like the LX also aren’t a priority for the safety organizations because of their low sales volumes. 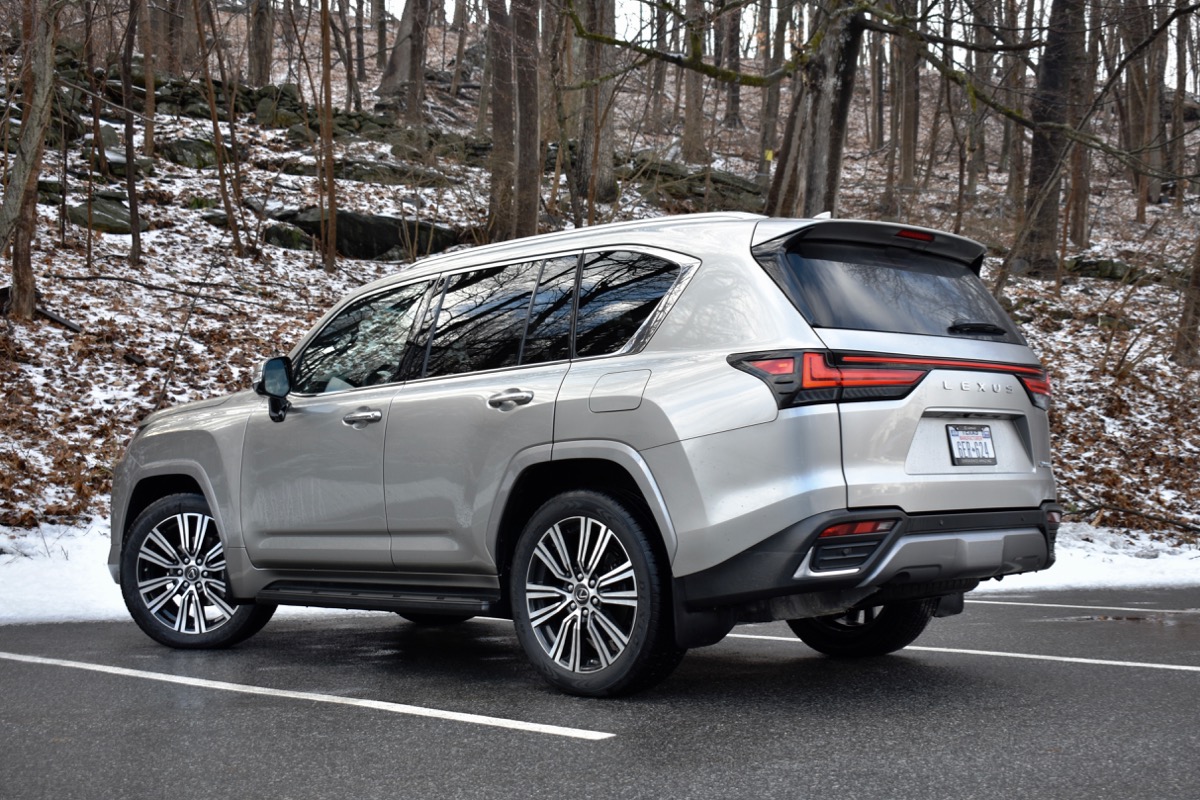 While a six-figure vehicle can never really be considered a good value, LX pricing is consistent with rivals. And buyers who shell out for an Executive VIP model won’t have to spend anything extra on options. Every feature from the lower trim levels is included as standard equipment on that top trim level. That isn’t always the case with other luxury brands.

The LX lacks the on-road driving prowess of the BMW X7 and Range Rover, the subtlety of the Mercedes GLS, and the sheer interior space of Cadillac Escalade and Lincoln Navigator, but it still has a lot going for it. The comfortable ride and (relatively) manageable size make a difference and real-world driving, and impressive off-road capability means this is no poseur SUV. While no longer a trendsetter, the 2022 LX 600 makes the Lexus flagship SUV relevant again.

Looking for a Used LX in your area?