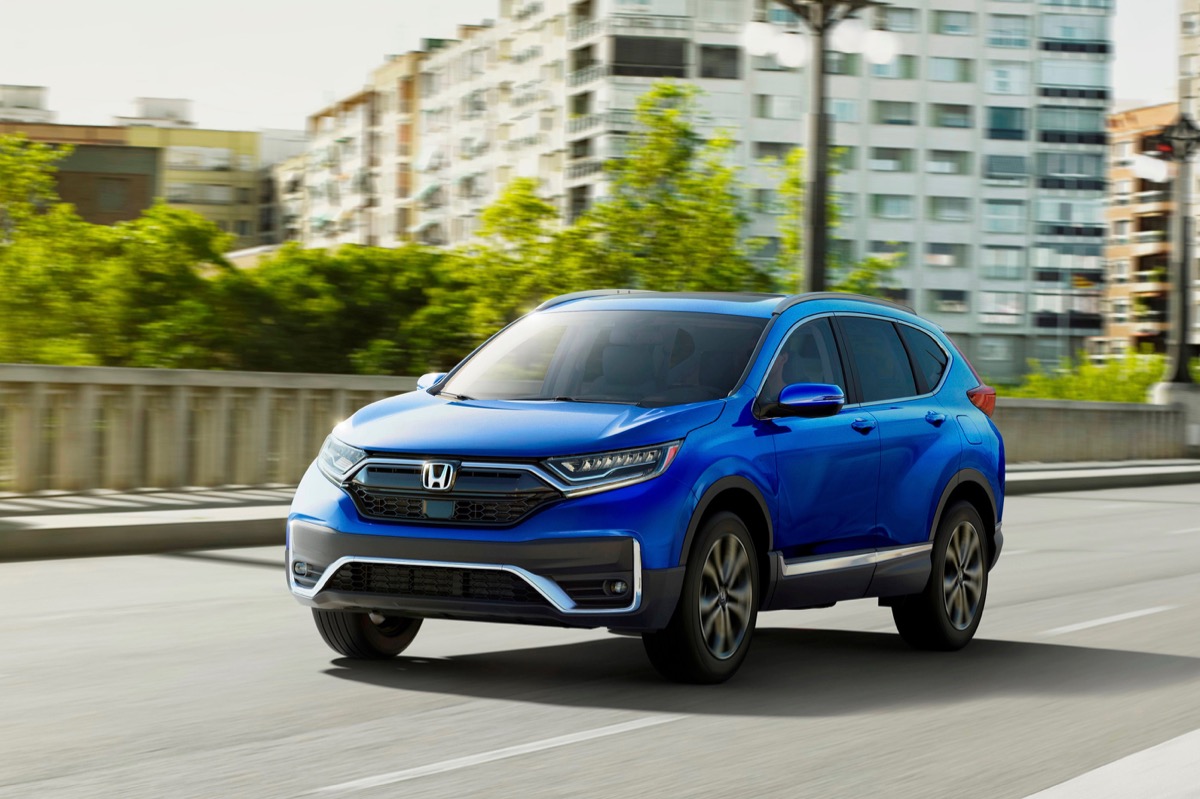 Looking for a Used CR-V in your area?

The Honda CR-V is hugely popular, but with competition from almost every single manufacturer, there may still be good reasons to look elsewhere. 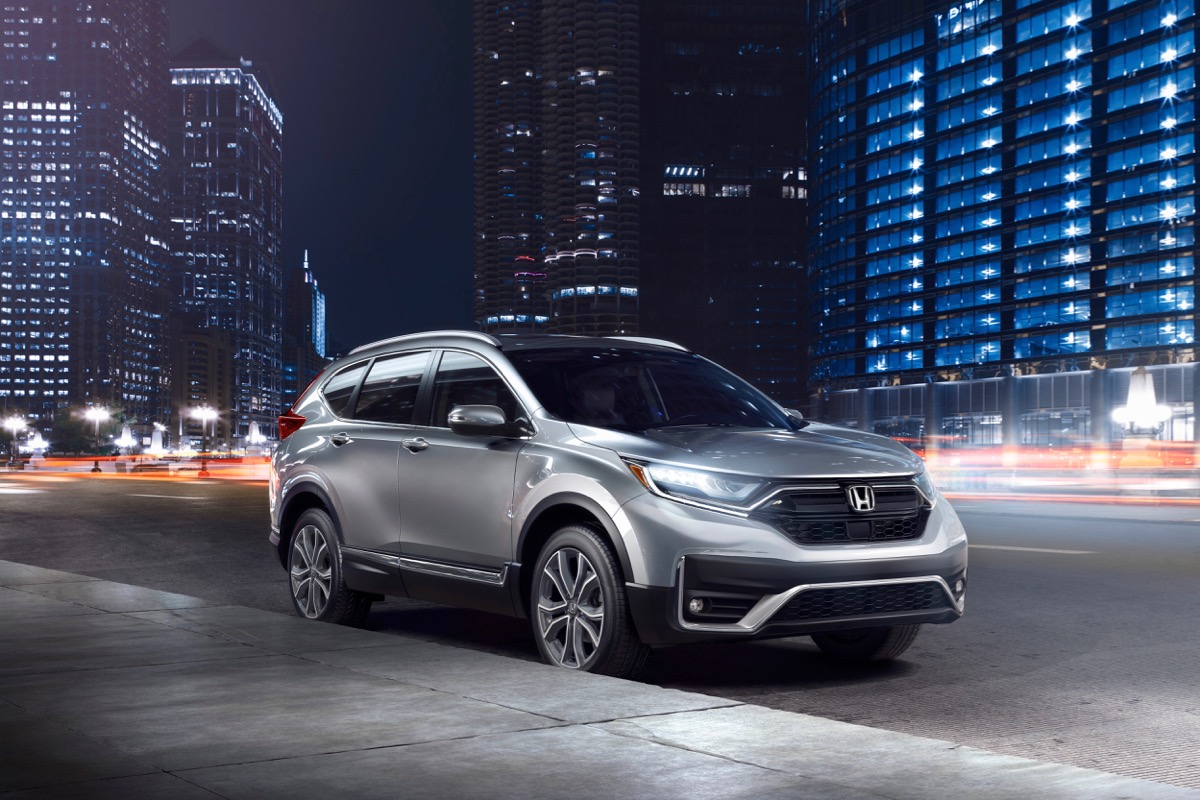 Even in a grim year, Honda is selling a staggering number of CR-Vs. The CR-V is the best-selling Honda in Canada, edging out the home-built Honda Civic. The CR-V is also the second best-selling compact SUV, just behind the Toyota RAV4. And it was the sixth best-selling vehicle in Canada in 2021.

So, it’s hard to argue against the CR-V formula. Honda’s been at this almost as long as crossovers have been a thing, launching the CR-V in 1997—a year after the RAV4 debuted.

The funny thing is, aside from sales volume, there’s only one thing the CR-V particularly excels at. Aesthetics are subjective, but it would be hard to argue the CR-V is the best-looking vehicle in its class. It’s not the cheapest. It’s not the best equipped, especially at the middle to lower trim levels. It’s not the fastest, nor is it the quietest, or the most fuel efficient. It’s not even the most reliable, showing up nowhere in J.D. Power's Most Reliable list.

So, what makes it so appealing to Canadian consumers? Let’s see if we can figure that out. 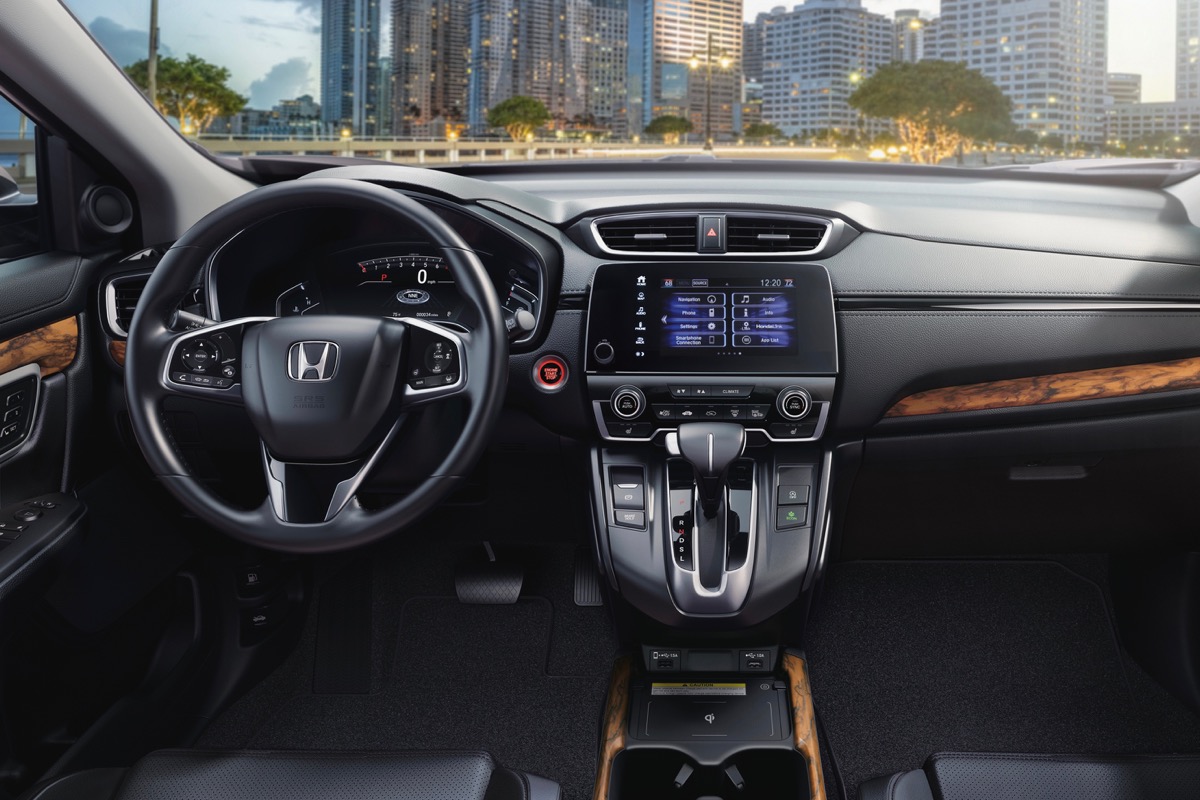 People who grew up with cars in the 1950s probably had a point in the 1990s when they said that all cars looked the same. At the risk of going all “In MY day…” the Honda CR-V truly looks the same as almost every other competitive crossover in the marketplace. The styling of all compact crossovers is nearly identical. What the industry calls the “daylight opening”—the side window opening—is shaped exactly the same, whether you buy a crossover from Honda or you choose one from anywhere else.

There are a few details that separate the CR-V from the herd, like the grille opening, and some chromed plastic features here and there, but if you’re in the market for one of these vehicles, you’re certainly not buying one based on what it looks like from the outside.

Honda offers the CR-V in seven colours, but that’s a bit deceiving. Three of those colours are slightly different shades of gray, one is black, and one is white. Then there’s blue (Obsidian Blue Pearl) and Radiant Red Metallic. The LX only has three colours: black, silver, and white.

We looked at the inventory at the largest Honda dealer nearby, and out of 37 CR-Vs on the lot, three were Radiant Red. The dealer had 14 in the same white as your mom’s refrigerator, so it seems finding one in any other colour is a challenge.

The inside is offered in black, either cloth, cloth and leatherette, or leather depending on the trim level. Climbing the trim ladder unlocks things like wood panels and more chrome for a more upscale appearance. The front seats and rear seats themselves are much more angular than some of the competition, with sharp details on the seat edges and headrests. It’s definitely a more modern look than some of the vehicles it competes with.

Inside and out, vehicles like the Kia Sportage and the Hyundai Tucson have an advantage over the CR-V, especially at the mid-tier trims. Again, these likely aren’t vehicles most people are buying on looks alone, but if it’s a consideration, other crossovers offer more distinctive styling. 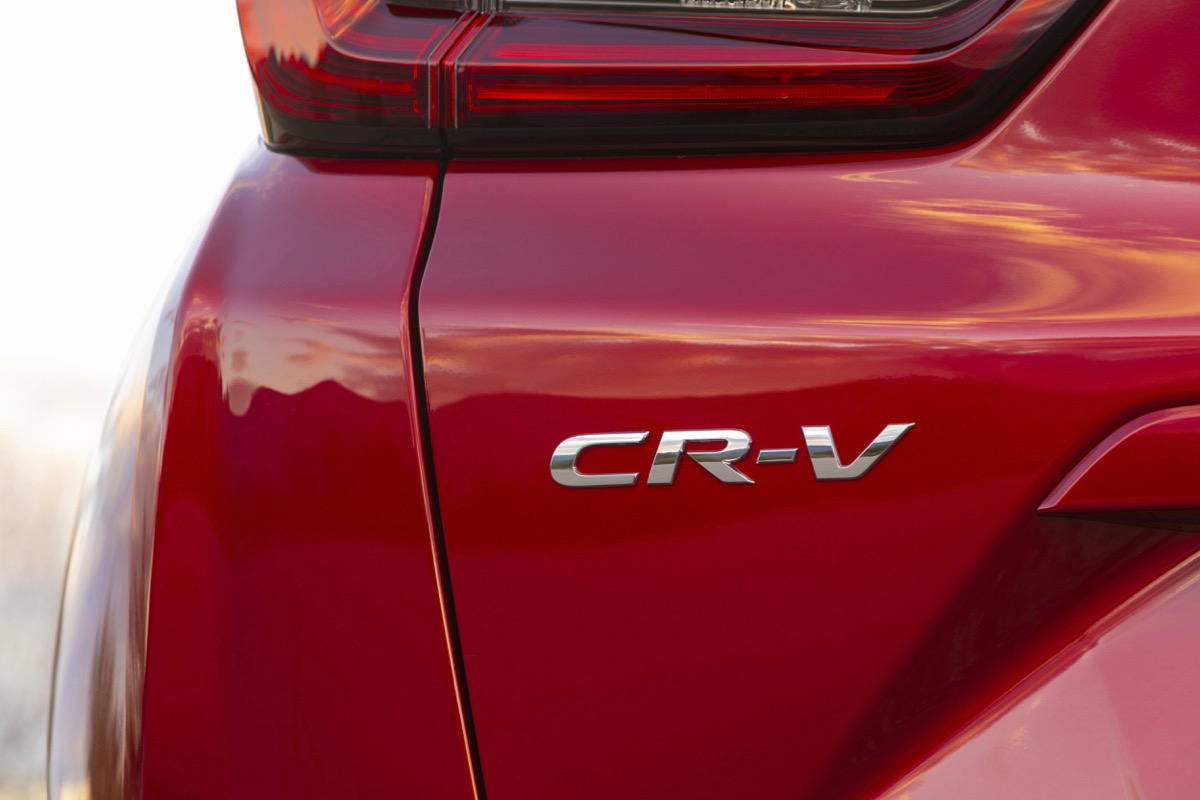 You’re not buying a CR-V for neck-snapping acceleration, or its ability to turn high Gs on the skid pad. What you’re looking for is smooth, steady acceleration when you’re merging onto the highway, and predictable cornering when you’re exiting.

Regardless which one of the five trims you choose, you get the same powertrain, including a 1.5-litre turbo four-cylinder engine with power specs of 190 horsepower. Contemporary road tests put its acceleration at about 8 seconds to 100 kilometres per hour, which isn’t going to win any stoplight drags, but it’s only about a second slower than a 1987 Chevrolet Camaro IROC-Z. None of the competitive crossover SUVs have any huge advantage over the CR-V in terms of acceleration.

All of the CR-V trims have the same continuously variable transmission (CVT) that holds the turbocharged engine’s revs at a more or less constant level as the vehicle accumulates speed. If you’re looking for engagement in your driving experience, this isn’t it. Again, the drivetrain is where vehicles like the Kia Sportage and Hyundai Tucson have a leg up. They both offer conventional eight-speed automatic transmissions, with sport modes at the higher trim levels that provide a more entertaining driving experience than the CR-V does. The RAV4 also has a more conventional transmission, as does the VW Taos.

The CR-V comes standard with front-wheel drive (FWD); all-wheel drive (AWD) is an extra-cost option on the LX grade and standard on all others. That's also the case with most of this Honda's competitors, but the Subaru Forester gets AWD as standard equipment.

Like every other vehicle in this class, the CR-V has a unitized body structure. Suspension consists of a MacPherson strut setup in the front, with a multi-link suspension at the rear, which you’re also going to find in almost every other vehicle in this class as well. Handling and ride quality has always been decent in this generation of CR-V, with no real surprises. 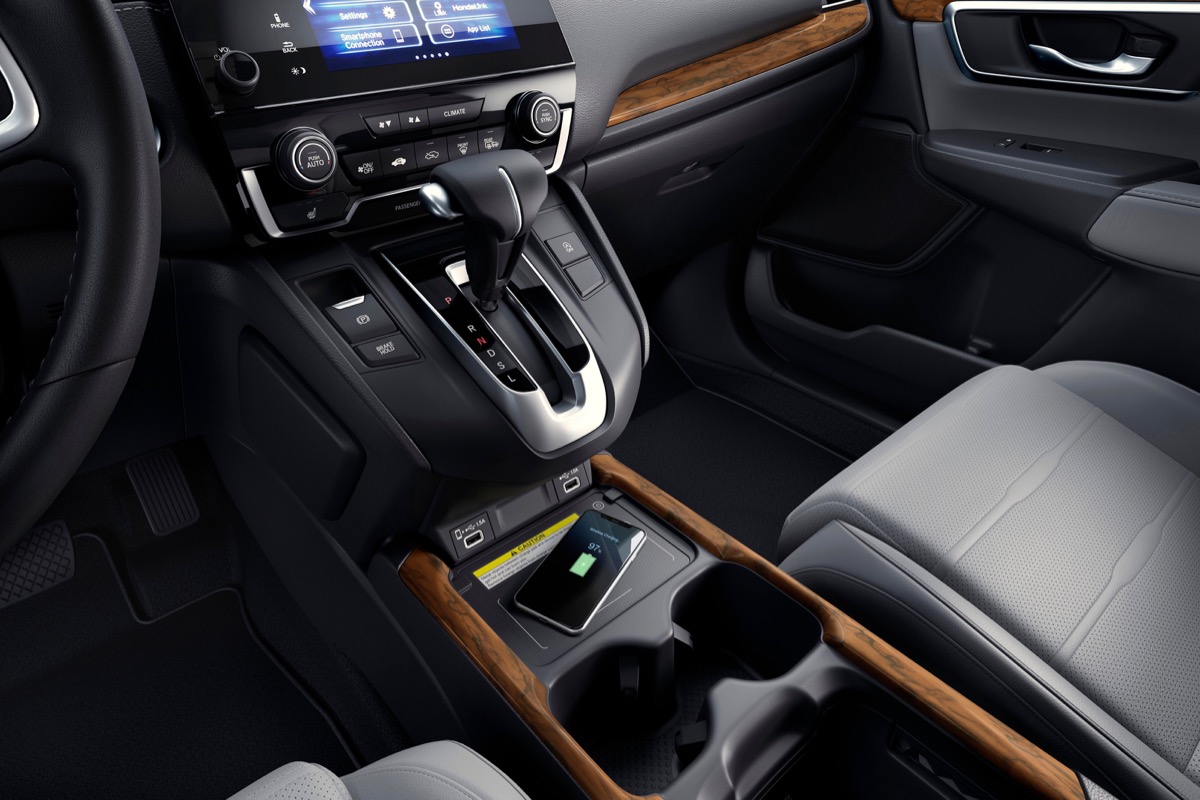 The form of the CR-V is definitely dictated by its function. The goal has been the same since the CR-V first came into existence: fit five people comfortably and carry their gear. In that respect, the CR-V works out as well as any other vehicle it competes with.

The CR-V boasts more than 100 litres more interior volume than the Toyota RAV4. It’s also got a tiny bit more cargo space behind the second row than the Toyota does. With the rear seats folded, the CR-V holds 1,065 litres of total cargo volume, which is enough to swallow all the rolling luggage in your house.

Getting to that cargo area is accomplished in one of three ways, depending on the trim. In the LX, you’re on your own to raise it and lower the tailgate yourself, which honestly isn’t a bad thing. The Sport upgrades you to a power tailgate, which operates via a button on the remote, or by pushing the button on the tailgate itself. The Touring adds a hands-free version of the power tailgate, where you wave your foot under the bumper to open it, as long as you have the key fob in your pocket. This is a nice feature when you’re carrying heavy loads—as long as it works. In the past, we've sometimes found ourselves doing a modified chicken dance to hit the right spot.

If you intend to carry something on the roof, the most CR-V trims have roof rails as a standard feature. 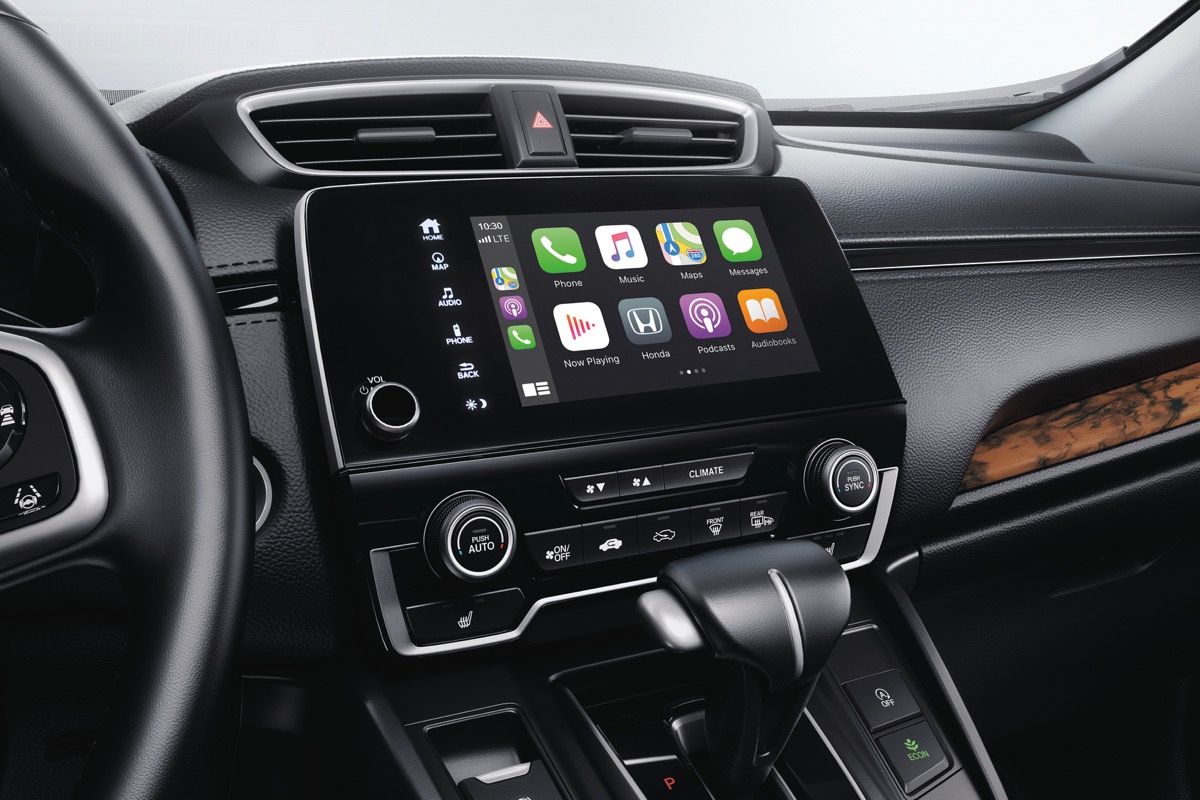 Lower trims have four, six, or eight-speaker audio setups. The Honda CR-V Touring upgrades to a 300-watt system, adding a subwoofer to the EX-L’s setup. From the Honda CR-V EX-L the audio system features Sirius XM, and an HD radio is included with Sport. The Touring and Black Edition trims are the only ones that offers a satellite navigation system with voice recognition.

With the exception of the base LX, there are charging ports all over the place in the CR-V, including 1-amp and 1.5-amp USB ports in the front console that integrate with the audio system, a 12-volt outlet in the centre console, and a pair of 2.5-amp USB ports in the second row. The Touring trim introduces a wireless phone charger up front. 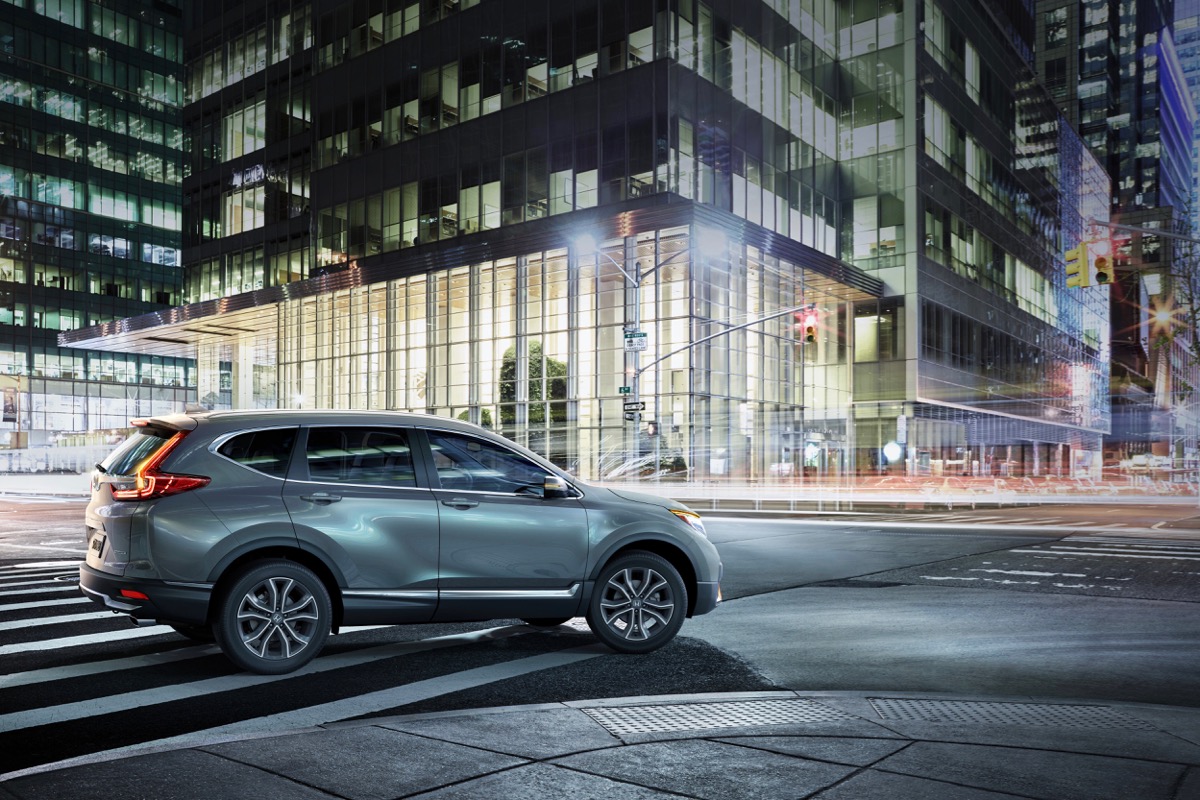 We mentioned earlier that there really was only one area where the Honda CR-V truly excelled. That area is safety.

Keep in mind that the compact crossover segment is the most hotly contested vehicle segment in North America right now. If your entry into this segment does not include a five-star National Highway Traffic Safety Administration (NHTSA) overall crash test rating and Insurance Institute for Highway Safety (IIHS) Top Safety Pick award, you didn't understand the assignment.

The 2021 Honda CR-V earned both safety awards. However, it didn't get the highest IIHS Top Safety Pick+ rating because of lower scores in the headlight evaluation (which vary slightly by trim level) and the updated side crash test. It got the best rating of “Good” in the original side crash test, though. The CR-V also received a middling “Acceptable” rating for the ease of use of its LATCH child safety seat anchoring system.

But what really puts Honda ahead of many of its rivals is how it packages its advanced safety features. It puts them all in a suite of technology called the Honda Sensing system, and it makes every single one of those features standard, no matter what trim level you purchase.

It is immensely frustrating to see manufacturers offer advanced safety features only on the top trim levels, with price tags that put them out of reach of the young families and single parents that could most benefit from having them. Honda’s approach is to rely upon economies of scale to provide almost all of the technology—even in the base trim. 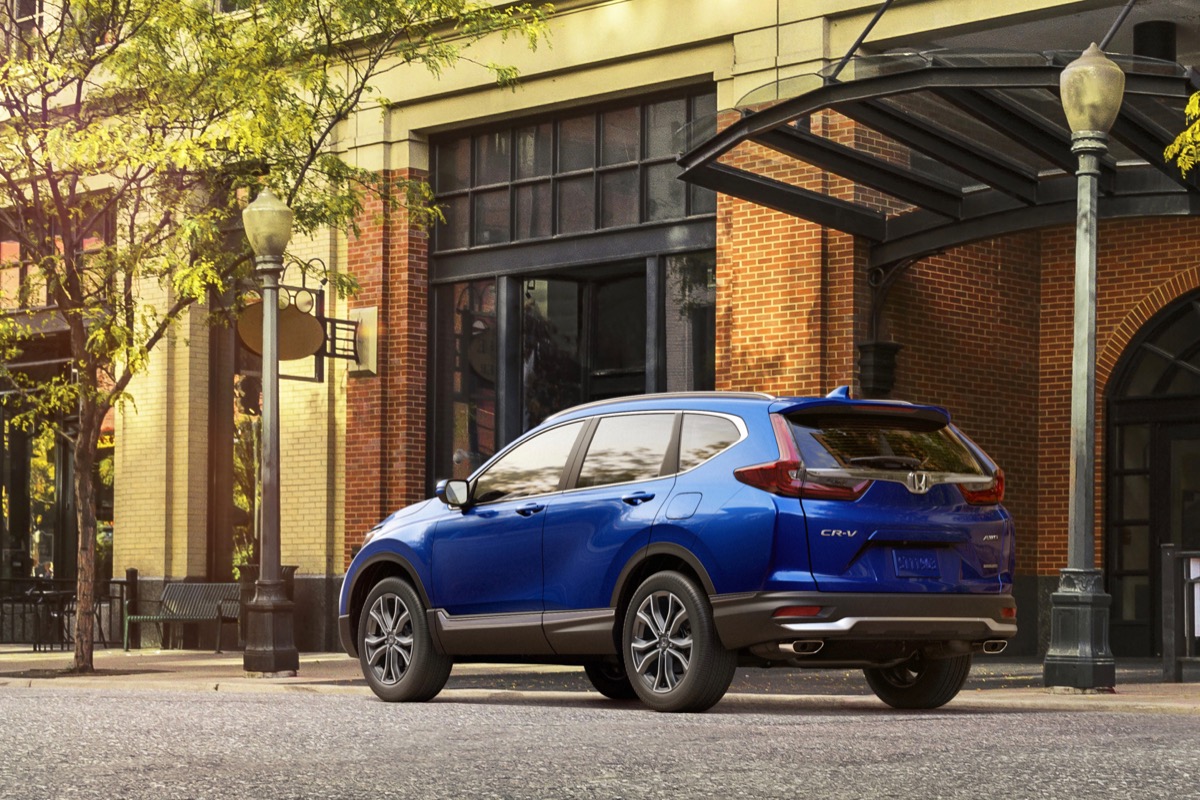 On paper, the CR-V provides decent Natural Resources Canada fuel consumption rankings. There’s a rating that goes as low as 8.3 litres per 100 kilometres in city driving, 7.0 on the highway, and 7.7 combined, but keep in mind that’s only the FWD trim. AWD models are rated at 8.7 L/100 km city, and 7.4 highway, and 8.1, which puts it into the same territory as the gas-only RAV4. (Unlike the U.S., Canada doesn’t receive the CR-V Hybrid that would compete with the RAV4 Hybrid on better fuel economy. That’s expected to change with the next-generation CR-V launching for model year 2023.) The Subaru Forester burns more at 9.0 L/100 km in city testing, but does better on the highway at 7.1 L/100 km, so its combined rating ends up being similar at 8.2 L/100 km.

MSRP is aligned with every other vehicle in the class. At the low end, you start at $29,970 for the base model FWD CR-V LX and pricing goes up to $43,750 for the top Black Edition trim level.

The CR-V's impressive array of standard safety equipment is also worth considering, though. If safety is your number one concern, you can see where the Honda CR-V has performed well against its rivals.

Guru9KDB6X Honda of Concord was super helpful with obtaining a Honda CR-V during the current long lead time period. Seeram was very communicative and helpful throughout the entire process. We are very happy to have chosen this business and car!

Guru9KDB6X Honda of Concord has been great! We worked with Seeram who has been a great help answering all of our questions and helping decide on the CRV.

Looking for a Used CR-V in your area?

Can I Sell You My Car If I Still Owe Money On It?

My 21 Ex Honda Crv Has No Cigarette Lighter.

i bought a portable car hoover that has only a USB connection to plug in somewhere. It needs a cigarette lighter but this model doesn't seem tohave one. Are there any devices to get so I can use th...

Why Would Brown Honda In Toledo Ohio Not Honor A Price Car Gurus Had Listed...

20 views with 1 answer (last answer about a year ago)

Are Most New Cars Selling At MSRP Right Now?

With the chip shortage are most new cars selling at or above MSRP?

101 views with 2 answers (last answer about a year ago)

138 views with 1 answer (last answer about a year ago)