My daughter just bought a 2007 Ford Taurus SEL and
after driving it for about 5 days the charging system light
came on. I brought the car to auto zone and they tested
the alternator and said it was bad, so I put a new
alternator in and after 4 days of driving the car the
charging system light came on again.  I brought it to Auto
Zone and the alternator was fine, but the battery was bad,
so I bought a new battery and replaced it, after my
daughter drove the car for about 2 days the charging
system light came on again. My wife brought the car to
Auto Zone and they tested the alternator,battery,and
fuses, and told my wife that the battery was only half
charged and that all the fuses were good, but something
is drawing the battery. So I put the battery on a trickle
charger and took a look at the battery cables and
terminals, there was quite a bit of corrosion so I bought
brand new cables with terminals and put them on. After
the battery was charged I took the car out for a test drive
and it drove a little rough and after about 30 minutes the
charging system light came back on again!  My thought is
that the alternator must not be charging the battery, but
I'm not quite sure what my next step should be. I'm
starting to think that maybe the PCM is bad and that I
need to replace it. I would love to hear anyone's advice on
what I should do next, I'm getting frustrated trying to
figure out what's going on and my daughter heads to
college in 3 weeks so I need to get this charging system
problem figured out ASAP!

Thank you in advance for everyone that helps me trouble
shoot this problem, I REALLY appreciate it!

My wife's toyota had a slow drain that turned out to be a bad grounding cable- perhaps there's a short in the system?

If charging system light went off when you first replaced alternator now it is back on I would say that new alternator is bad. Seen it many time new out of the box not charging or only works for a couple of days.

Thank you both for your input! Firebird338 I definitely think the alternator took a shit on me after thinking about your comment! When we 1st got the car my daughter drove it for maybe 2 days before the charging system light came on and i told her I was going to fix it over the weekend, but before I had a chance the car TOTALLY DIED on her while at the bank. The battery was completely dead to the point where the car wouldn't even allow the electronic locks to work so I had to use the key to open the door. I knew it was the alternator so I went to the auto parts store and bought a new (remanufactured in MEXICO) alternator and did the install after the bank closed for the night. Once I put it in we jumped her car and the car ran like new for about 4 days with ABSOLUTELY NO PROBLEMS, my daughter put about 250 miles on it and then the charging system light came back on. It has to be the alternator that went bad again. I'm going to bring it to the mechanic that lives by my house today and have him test it and then I'm going to bring the alternator back and get a new one and put it in!! Thanks again for your input and I will keep you posted!

If you got the two alternators from the same place suggest getting one from another auto parts store.

There are so many issues with aftermarket/remanufactured alternators. For some reason, it seems the Taurus is the worst when it comes to this issue. My '98 is doing the same weird stuff. It's hard to find a new Motorcraft alternator. What's worse is that I'm told they have 3 different voltage regulators but the exact same connector. It could actually be the wrong voltage regulator. Best part? All have the same damn part number!! Not sure if 2005 is the same, but it's worth a check. Call and ask the dealer for the part number that matches the vin on your car. Hopefully it will be the correct one. I'm not buying anything rebuilt anymore. Nothing but crap.

texastone answered about a year ago

If your battery light is on, and it's not the alternator or the battery, Then you will have to go through these steps. It's either a break in an orange/blue wire coming from the connector that connects to the alternator regulator, which runs to the ECM, or you need a new ECM. Mine was the ECM. Good Luck! 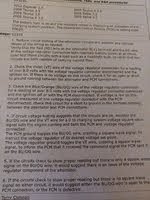 Looking for a Used Taurus in your area?