Nissan Sentra CVT Transmissions...truth from a mechanic, and a question

I have a 2013 Sentra, and the transmission started going at 79,000 miles.  This happened last month (August, 2019). Since it was a certified used vehicle, I got a replacement transmission installed, at no cost (7 year, 100,000 mile powertrain warrentee.)

The replacement runs fine (so far) after putting 1,000 miles on it.

Today, I went to the dealership for an oil change.

When walking outside of the dealership, casually looking at cars on the lot, I saw 15 boxes. (see pictures) All 15 boxes said CVT on them. One box was a different size than the others. I don't know this, but I'm guessing the 14 smaller boxes were to replace transmissions for cars, and the other was for an SUV or a truck?

Plus, there was a used one sitting out there, as well.

So it looks like CVT transmission replacements are pretty common.

I spoke with a mechanic, and here's what he told me about Nissan CVT transmissions.

*  He recommends changing the transmission fluid (not just the gearbox, but flush and fill the entire system) every 30,000 miles. He says Nissan isn't completely clear about when to change the fluid, but from a mechanics perspective, 30,000 miles is the best gauge to go by.

*  He said the CVT transmissions for the smaller cars are build with a metal belt, vs a metal chain. These belts are the problem. When there is a lot of heat, (proper cooling is also an issue) and/or just the fact the belts are so thin, the transmission can start slipping. Eventually, these metal bands act like a rubber band that has been stretched to far, and too often. They lose their ability to hold, and slip. This causes stalling, jumping, shuttering, etc.

* He told me the larger cars, SUV's and trucks have metal CHAINS instead of BELTS. The chains have a much better history, and less of a failure rate. They are far less likely to stretch and slip.

Now that all of these statements have been made, I do have a question.

Some of the boxes that I saw outside the dealership that were replacement CVT transmisions said Jatco (the company that Nissan uses to make their transmissions) but some said JME X. Is this an aftermarket transmission, or a division of Jatco? 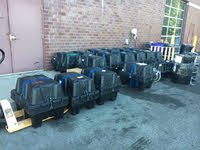 Larger cars don't use CVT's are they can't handle the torque of larger engines. Never buy any car with a CVT and that goes triple for any Nissan with a CVT. Ed is right. Dump the car while you can.

apollo1980 answered about a year ago

I'm in the market for trading in the car for a Toyota or a Honda. Carmax said my car is worth 5000 to them, just below the value of the car if I sold it myself per KBB, and about a grand more than a typical trade-in for my car, per KBB. I went to a Toyota dealer, and they told me they automatically match Carmax quotes. Tomorrow, I'm looking at Hondas as well.

apollo1980 answered about a year ago

Happy to say I got $5000 for a trade-in with the Sentra. I purchased a 2016 Honda CR-V AWD. So far, very happy. Yes, it has a CVT transmission (like a lot of vehicles do now, unfortunately) but the advantage is that both Honda and Toyota make their own transmissions, and have done so for years, so they make them better and better. I know that Nissan owns Jatco, and those transmissions are also made for other car companies, but their transmissions are not that great. I don't plan on owning a Nissan again. For me, it's Honda or Toyota, although I would consider Mazda or Subaru.

Jatco and JME are the same company. Avoid Nissan cars

Looking for a Used Sentra in your area?