This morning I got in my 1997 cadillac eldorado and the battery light came on and it was running rough almost like it was out of gas but I have a full tank . It starts up every time what could it be ?

when we checked battery connection one
of them was very hot.

Check output of alternator, it may not be charging. 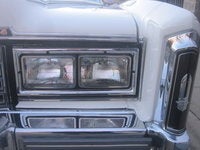 Looking for a Used Eldorado in your area?

CarGurus has 2 nationwide Eldorado listings and the tools to find you a great deal.