So I have a Cadillac DeVille and it just recently
broke down (it would turn over but would click
rapidly for about 30 seconds but would not start) i
took it to my brother in law (who is a mechanic) at
first, he thought it was the battery and had it
charging but nothing happened but found out my
starter was bad and also the crankshaft sensor
was bad. He proceeded to change those parts but
now the key won't turn over at all!!!! And when he
tries to run the codes, it pops up error and he is at
a loss. My car won't start and the key won't turn
over! Can somebody please give me an idea on
what's going on with my car

So you are saying you can put the key in the ignition but will not turn to the on position ?

I changed the key ignition about half a year ago

Your key maybe worn do you have a spare key ? Also you can try and spray some WD40 with straw in and around ignition switch it may help. 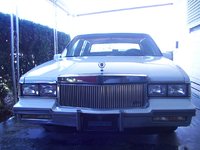 Looking for a Used DeVille in your area?

CarGurus has 15 nationwide DeVille listings and the tools to find you a great deal.