I have a 2009 Toyota RAV4 V6 Limited with 6,000 miles. My question is about the AWD system. Does this vehicle have a limited slip or locking REAR drive axle? I know dash button will lock center diff.

I drive in deep snow to my cabin in the Utah mountains and my 2013 Toyota Highlander doesn't due very good in deep snow (8" +) due to the reduced engine power if the wheels start to spin. I have not taken the RAV4 in this type of snow yet and want to know if it would do better.

Interesting that your Toyota Highlander has problems, isn't that AWD?

Yes it is but they used open differentials on the front axle, center axle and rear axle relying on reduced engine power and applying the brakes to the spinning wheel(s) for traction. Power gets reduced to the point of not being able to move the vehicle. I can turn off traction control but that turns the Highlander into a 1WD and it just spins the tire with the least amount of traction. I am looking for a new vehicle and need something with a locking rear and center axle and true 4WD.

Have you considered a Subaru Outback?

Subaru has been perfecting their AWD system since 1972, that's 43 years. I've got a friend who visits coeur d'alene idaho often and tells me that Subaru Outback are all over up there and in the northeast.

Google Subaru Outback + snow and you'll find lots of YouTube videos on this car. Has excellent traction in muddy conditions as well.

I think the RAV 4 might be better, but, not sure it would beat the Subaru?

Thought about that. My FIL had one but he never drove it in the snow conditions like we experience in Utah. Highlander is great and about the right size and it works well in "normal" snow conditions going up the canyon. Its just the last 500 yards off the main road going up hill where it just doesn't do what I need. I do like the Highlanders size.

Silverfork, I like my Outback very much. I don't live in snow, but, I take road trips and am pretty confident it can go anywhere. Took it down some non maintained dirt road in Sequoia and it did fine. And, it's pretty spacious inside, 73 cubic feet of cargo. Not sure if Highlander is larger? The Outback is basically a large station wagon. It's very light on it's feet and is easy to drive. Also, the flat 4 engine gives it great cornering for such a large vehicle.

Silverfork, there's no button in the Outback, at least mine. Some Subaru's have SI Drive, especially the WRX. Maybe some Outback have it, you'll have to check. Otherwise, the car just eats snow for breakfast, I'm told. And, since the car is AWD and CVT, you'll always be in precisely the right gear. It's coordinated with the engine speed. In case you don't know about CVT, look up the technology. Very ingenious. Actually, CVT was first designed on paper by Leonardo da Vinci. That's remarkable in itself. An engineer told me that it's simpler than regular automatics and will last longer due to less moving parts. I believe him. My 2009 has a form of CVT called "power sharing" , its a little different in the Subaru. Plenty of power even with the flat 4. If you really want a rocket, the H6 has ample power at a fuel penalty.. Take one for a test drive , you're going to impressed, especially the handling.

The "snow" button is on my current Highlander. My Highlander Hybrid was a CVT too, which I liked. My 2013 Highlander has a 5 speed auto.

This explanation of the Toyota system is perfect. https://www.youtube.com/watch?v=dLNDGUISTYM

8"+ of snow: NO small SUV (including Subaru) has enough ground clearance to deal without creating long term damage to the electronics and wiring located under the car. Youtube videos show cars and truck doing plenty of amazing things but they do not show the same cars and trucks being in a shop because they got CEL every two days for different reasons. These SUV/crossover are not designed for it. Simple.

If it's any worse than the two conditions I just posted, maybe you shouldn't be out in it!

Thanks. I'll check it out. I didn't have this problem with my old FJ40, Olds Bravada or my Jeep Rubicon. I bought the Highlanders for a little more traveling comfort from Washington to Utah. Maybe I'll go back to a Jeep.

I'm talking about this type of snow in my driveway. 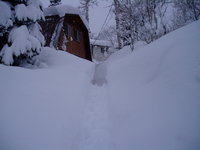 On some vehicles turning off the traction control will help when navigating mud or deep snow. This will reduce the problem of losing rpm when the computer detects wheel spin. I don't know if this an option for a Toyota, but it worked well in a Honda Ridgeline and Ford F-150.

Thanks, Bob I have tried that but with an open drivetrain all it does is allow one wheel to spin but sometimes I can get enough rocking motion to get going.

Looking for a Used RAV4 in your area?