I have a 2008 Dodge Avenger. Heater blows hot air on the driver side, but it blows cool air on the passenger side. Help!

I have a 2008 Dodge Avenger.  Heater blows hot air on the driver side, but it blows cool air on the passenger side. Help!

how do I fix the blend door

Its behind the glove box, near the blower motor. Usually between the firewall and the heater controls. Every vehicle is a little different. Just have to tear into it and look for the obvious, broken parts(door or motor), broken wires, parts not put back together properly(happens a lot if work was done in that area previously) ect.

Please fill out a complaint with http://www.safercar.gov/ or contact (888) 327-4236 and they will help you file a complaint to the manufacturer.

GuruQNMRW answered about a year ago

This is a solution I found and am gonna try. I replace the blender door and it didn't help mine so don't waste your money or time. The problem is the heater core is mounted at about a 30 degree angle with the hoses on the bottom. This allows any air in the system to accumulate at the top, effectively reducing the usable size of the heater core. The way I solved the problem was to jack the drivers side as high as possible and removed the upper (as they come through the firewall) heater hose and inserted a funnel. Then I removed the air bleed screw on the thermostat housing. I refilled the coolant system through the heater hose/funnel. Once coolant began to flow from the air bleed without air I replaced that screw. I started the engine and continued to fill until coolant flowed from the heater pipe where I had removed the hose and then capped the pipe with my thumb. I continued to attempt to fill the heater hose, holding it as high as possible. When I could not fill any more, I reinstalled the hose as quickly as possible to allow as little air as possible from reentering the system. I filled the coolant reservoir, and continued to get the engine to normal operating temperature and ensured the reservoir was appropriately filled. Keep in mind that any time the system is opened or leaking, the symptoms will return until as much of the air is removed from the system again.

GuruQNMRW answered about a year ago

The above solution was posted by another GURU member and I'm just copying it over to save yall time and money concerning blender door. 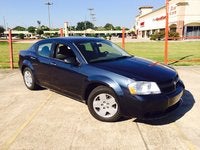 Looking for a Used Avenger in your area?