This one has 223,000 miles .Was on freeway with A/C on  max blower on high and noticed that the blower would slow if I depressed the throttle.  What could that be .
Alternator is working properly  Has V 6 automatic transmission

you need a blower resistor pack~ 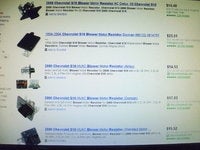 Thanks Roy ,makes seance only did it on high max

the third position on my 93 toyota is a dud---the A/C still works after seven years of NO maintenance...kids stole all the knobs, dashboard smashed by a greedy thief who stole the chromey SUN tachometer (not needed) the thing is a disgrace, but still works on the HIGH speed...only to gather the courage to replace me own defective resistor bank (kinda primitive technology, as we've had high speed switching of currents via semiconductor for years)....perhaps the Amperage would make it expensive....don't know anymore....just run it on high and be glad that it works on ANY of the four speeds....I'll get around to it~

haven't we communicated previously...those 200 points came from some or other experience with the cargurus?

It's possible .I have a 2000 S-10 and the wife has a 2003 Honda Accord.S I answer on these 2 and any I know the answer t. S how does that resister pack work? I know the increased resistance will slow the fan speed,but how would the throttle affect it.

well the throttle would increase the speed that your alternator is turning...your alternator's regulator limits the voltage to 15 and the amperage to probably 30~ as you go for the gas, the alternator is supplying more that what your battery is soakin' in, so the extra juice has to go somewhere....your fan motor is the perfect place~...else it will try to "cook" itself (the 'lectronics will)~

That would make seance,but it's doing the opposite. As I go faster the blower slows down. That's the puzzler. When engine speed slows it speeds up.(doing 70mph at 2000rpms )

Trebor66, you could test the voltages there at the blower, to see if perhaps your voltage regulator is being a bit hyper-active~ 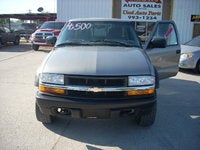 Looking for a Used S-10 in your area?