No start and no crank

Have a truck i just bought that won't crank. When I
put the key into the ignition and turn it I get a click
from the fuse panel and thats it. The security light
flashes rapidly followed by a few shorter flashes
and finally it stops after 2 short flashes( happens
over the course of 5 minutes ). If I jump the starter
solenoid on the starter itself it does turn over but it
wont fire ( the guy I bought it from said he thinks
there is a fuel issue) . I thought I may have lost my
key code but wanted to see if there was something
else I can do that may get it going first. I'm not
entirely convinced the key is the proper one either.

This is a security system issue, your guess that you have the wrong key is a good one. Did it ever run for you or did you buy it this way?

He told me he was driving it and it suddenly quit on him. He had one key on him and thats all. It was not running when I bought it. I don't know what a typical chipped key would look like but this one is this and small. Almost looks to be a door key.

Post a photo of the key. I hope you got this truck for free or something close.

It was cheap. Was planning on using it as a parts truck for a lady I was helping but it had less damage and work then hers so we went with fixing it instead 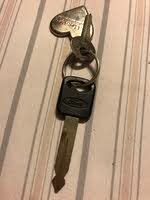 If you have the VIN and proof of ownership a Ford dealer can make a new key.