My 02 Montero sport was driving and shut off
havnt been able to get it to start  since ...it will
crank seems like it's not getting fuel

Do you hear the buzz of the fuel pump when you turn the key to accessory?

Having the same issue with my 2000 Montero

My 02 Montero sport is or was doing the same thing and come to find out it was just low on oil...it has a engine protection sensor and cuts off when it's too low...I hope that's all that's wrong with yours....maybe I just got lucky I don't know but check your oil level and if it's low just put some in... hopefully yours is the same problem...was a cheap fix thank the Lord...

OK thank you so much Ill check that... wow that would be crazy if that's all it was after all this work I've done to it!!!

Clytnjms answered about a year ago

When that happened to mine, My Montero 2002 Sport xls went into limp mode. Turned out the tensioner had failed as well as my timing belt being broke. I bought a timing belt kit as well as a new tensioner, and it runs like a clock now. It'd had this ticking sound while idling for a long while and some of the forums said it was the tensioner going out, but I had other Mechanics say it was something else or not sure exactly what it was so I could have prevented that from happening at first sign of that tensioner beginning to click. Live and learn

There is a 100 amp breaker under the hood next to the battery under the fuse cover. It is green and if bad requires a 10mm socket to replace. 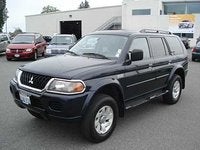 Looking for a Used Montero Sport in your area?