I have a 2005 Ford F250 that has problems when getting fuel at the gas station at the fuel pump, it keeps thinking its full and keeps clicking off the fuel pump.

I have a 2005 Ford F250 that has problems when getting fuel at the gas station at the fuel pump, it keeps thinking its full and keeps clicking off the fuel pump. Very frustrating trying to get gas, one drop at a time.  The tank could be completely empty and when I go to fuel it up I am only able to put .50 in at a time and the gas pump cuts off at the gas station.   Any suggestions???

I have tried everything, There has to be something else you can suggest.

Some possibilities....kinked filler tube, something got in the tube, (I have seen kids put marbles in the tube), vent tube kinked, bent or collapsed.

I agree, If you tried moving the nozzle back out a little and there is a rubber boot on the gas pump nozzle, then something is either clogged and your not getting enough air into the tank from the smaller overflow tube or there's a hole and you're getting too much air, that's why it's shutting off on you. Look under the truck where the filler neck is and see if the rubber tube is kinked or pinched or if you see gas seeping of smell it . I had a 97 Ford van that did that everytime I put gas in it. I never really filled it up because it had a 33 gallon tank. I did manage to fill it up one time and that's when I found out that I had a small pinhole in the rubber vent tube and that was causing the pump to shut off as I was getting too much air into the filler tube. I replaced the hose and the problem went away. Until you figure it out, try starting out slow with just a little pressure on the nozzle handle then squeezing it a little more once the fuel is flowing and then a little more and so on until it's flowing like it's almost all the way open. That worked for me. Good Luck, Kenny.

GuruGB6YY answered about a month ago 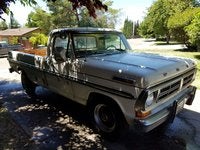 CarGurus has 3 nationwide F-250 listings and the tools to find you a great deal.