Our 2017 Subaru Impreza burns obscene amounts of oil. Thus, we'd like to trade it in for a Mazda CX-3 AWD? Does the CX-3 have any oil-consumption issues? We're trying to avoid a similar problem. Thank you.

Guybrarian answered about a year ago

It's a long sordid tale, unfortunately. Subaru admits that its lemon engines burn oil and even lost a class-action lawsuit over the issue. Many owners have oil-consumption tests done. Some even replace the engines. Nevertheless, the oil gulping persists, and Subaru won't remedy the universal problem. We're done with Subaru but don't want another Gastrol-guzzling brand. 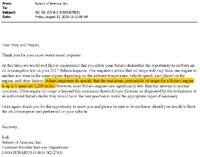 I have not seen any reports of the Mazda's burning oil. BTW. That letter is lying about the oil consumption standard. The standard is 1 quart in 3,600 miles.

I am wondering if Subaru has backtracked on their oil consumption standards due to their crappy engines.

Guybrarian answered about a year ago

I wonder too. Unless the email contains a typo, Subaru engines can burn 106% of their oil between factory-recommended changes. Huh? Ours burns 1 quart every 3,600 miles. We have to add 2 quarts between oil changes. We now carry a 5-quart jug and funnel in the trunk.

It appears that Subaru has been very busy purging the internet of any reference to their oil consumption standard of one quart in 3,600 miles. I will NEVER buy another car from this evil company!

I have a 2017 Mazda that I purchased new and it DOSE burn oil (from day one). I was told by the dealer that Mazda will not consider this defective unless the car burns more than one quart every 1,500 miles. Yes there is a 5 year warrante on the drive train but I am having a difficult time trying to get Mazda to own up and resolve the issue. Currently my car consumes a quart of oil in less than 3,000 miles..

Looking for a Used CX-3 in your area?