I have a 1973 naturally aspirated 280zx with a
blown ecu. Currently, I am building a Megasquirt
3.0 ecu but that's taking way too long and I want to
get my car running; however, I can't find an ecu for
a 1973 280zx.I want to know, are here models from
a different year that are compatible?

First of all the 1973 cars were 240Z's and I doubt they had an ECU since they had carburetors. If you have a 280Z from the 80's with fuel injection they would have an ECU.

A 2 second internet search shows up lots of 280ZX ECU's for sale.

Thanks for replying, when I got the car the guy said it was a 1973 280zx, even the registration says it's from 1973 but you're right the zx model wasn't introduced until 1979 when Nissan bought Datsun. So I guess things just got a bit more complicated since I now don't know the year of my own car lmao. It is fuel injected and I'm working on building an ecu at the moment but as I said before, it's taking too long and I really want to get the car running so I want to get a used ecu to put in the car until I get the Megasquirt finished.

I think it is an 1983. Nissan is Datsun, they just changed the name they used in the states. Look for an emissions sticker under the hood and look at the door jamb tag as well for the year. 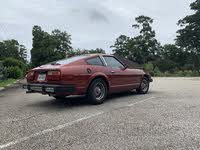 Looking for a Used 280ZX in your area?