I have an 88 Nissan Stanza Wagon which has been leaking power steering fluid. My mechanic, who has been excellent in the past, replaced the rack and pinion three times, and it still leaks more than ever. He has only changed me once, and he felt sure that the parts were defective. After the third time I don't have the heart to take the car back to him. Can anyone advise me as to why it is still leaking? I need to fill it every few days. Thanks

I have an 88 Nissan Stanza Wagon which has been leaking power steering fluid. My mechanic, who has been excellent in the past, replaced the rack and pinion three times, and it still leaks more than ever.  He has only changed me once, and he felt sure that the parts were defective.  After the third time I don't have the heart to take the car back to him.  Can anyone advise me as to why it is still leaking?  I need to fill it every few days.
Thanks

We also have a 1988 Nissan Stanza Wagon which has had a history of power steering leakage. For along time I'd thought that the pump itself was leaking, because most of the wetness and dripping was coming off that end of the engine, towards the front, and the hose has a downward path leaving the pump before it heads back up, so the hose was always wet there-but the powersteering fluid was being thrown over the pump, the hose and everything in the immediate area due to the a/c fan being right in front of it and gradually working it's way backwards. I pinned down the actual location of the leak by pressure washing the engine and watching to see what got oily immediately, and that turned out to be a hidden section of the front hose. They must have had terrific quality control at Nissan when those hoses were being assembled because the second high pressure hose started to leak about a month later. I really can't complain though-the wagon was about 20 years old before the leaks started. The factory hoses use a fabric wrapped type hose material in the flexible sections of the high pressure line(s) connecting the pump and the steering rack, so to watch for a leak it takes some doing to dry them off completely. With BOTH leaks the powersteering fluid eventually followed the hose all the way down to the steering rack., but it was more heavily leaking off the rack when the leak was coming through the second hose.. After 3 tries with replacing the rack, I'll wager that the problem yours had was coming from the pressure line, either the hose material, or from a damaged fitting on one one end or the other that isn't sealing properly, rather than a leak from the rack itself. Another possibility is that a section of the metal tubing has been perforated, either from vibration-related or other physical damage or by rust. Also, repeatedly changing the rack would tend to put a lot of extra stress on the metal lines, so even if it didn't have any leak age there initially, a NEW leak could have started after the lines were reattached the first time. The first pressure line goes from the pump and connects to the second one under the ignition coils just above the passenger side front wheel., and runs back to the just shy of the firewall and then down and across the entire width of the steering rack (positioned on top of the rack), where it makes a 180 degree bend and then attaches to the rack. That hose is mostly fabric covered hose, with only a short section of metal on each end. The second line is mostly metal tubing and starts there and has only about a foot of flexible hose material where it runs horizontally across the inner fender. Those flexible sections are the places that I'd look first for a leak.

Try using Bar's Leaks Power Steering Sealer. We have the same vehicle with the ORIGINAL rack and pinion and 253K miles. AFTER changing BOTH the high pressure power steering hoses, the power steering leakage rate was significantly reduced, but I couldn't completely stop a leak that was dripping off the rack area. I was still adding a different brand power steering f\luid/leak stop at the rate of an ounce every 1-200 miles. SINCE adding 1-1/2 oz of Bars Leaks Power Steering Sealer I have not NEEDED to add any additional fluid in over 500 miles. (still keeping my fingers crossed and checking it often though) 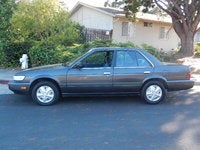 Looking for a Used Stanza in your area?