I replaced my timing chain by the book  on my
2007 Mazda 3 2.3 and everything was put back
correct but now my engine does not want to start
but crank shaft rotates I need some advice please.

Also I have spark coming from alpha coils I have air coming from every cylinder I have a good battery the crankshaft pulley is rotating I don't hear anything coming out of the intake Muffler how would I troubleshoot this problem I appreciate it. 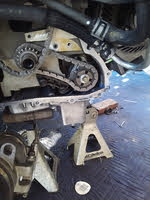 F_O_R answered about a month ago

If you put everything back correctly it would run. Double check your work.

I took everything off and redid the step by step 3 times, that's why I'm asking for troubleshooting advise.

F_O_R answered about a month ago

The timing chain in that photo is very loose. Check for spark and fuel.

I did a pressure test with the spark plugs and there is no pressure in any of the cylinders. And my RPMs gauge doesnt move either.

Arnold answered about a week ago

I really appreciate the replys guys and I followed them as well however after doing a pressure test I discovered I had 0 pressure soooooo I figured out all the issues with the car I had 8 bent intake valves, faulty PCV valve, worn out rod bearings. So in conclusion I purchased all new parts and engine gasket kit I basically rebuilt entire engine here's a list of new parts. Piston rings(Hastings) Rod bearings with engine assembly I honed the piston cylinders and used valve compound to terminate the leaks on valve head 16 new valves replace Resurfaced the head and new gasket New PCV and breather a I'd say an 75% engine overhaul 100% cleaned and reinstalled. It started up good but shaked & ruff idle I took for test drive but when accelerated it was hesitant but then gained power on every gear. So I redid the timing but now it cranks but no start I've been resistance testing all sensors but still dont start also I have no Pcodes on, what's the next step I've been on this for 2months now & I lived this car up until now please help. Thanks alot everyone for any future replies. 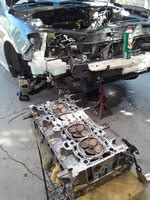 Looking for a Used MAZDA3 in your area?