How safe is the volkswagon beetle in an accident?

Here's a picture of an older vw that was hit headon by a drumk woman in San Diego this weekend. Be careful with those older beetles. Not much protection.

Old Beetle???? You're safer rollerblading on the motorway!!!

So you think your car would do any better in a head on collision at a 130mph closing speed with a lifted, full size pick up truck?

The real answer is that in it's day the VW was as safe and in many cases safer than other cars in it's class. Like every other car of it's eras, it will pale compared to a modern car. It is simply not a fair comparison. A new VW Golf is safer in a head on collision than a 1965 Cadillac. If you are interested in an old school Beetle, make sure it is in good condition-not rusty, with good modern seatbelts, good brakes (a stock 61 Beetle would stop from 60 mph in 111 feet according to Motor Trend-as good or better than Corvettes up to about 10 years ago), good tires. It will never be as safe as a modern car, but again, no old car will be. The crash pictured above was a wrong way driver crash at freeway speeds. Type wrong way crashes into the search on YouTube and you will find that even in modern cars, things rarely go any better.

I once encountered what was called a "horse collar" where the driver hits something larger than a bread box and his head smashes through the front windshield and stays there.

I've driven 1960s and 1970s VW bugs and buses for the past 45 years or so. I've been on the LA freeways, on curvy ocean side cliff roads, in the mountains, in the snow, and actually driving off road in the woods. I drove a 1970 VW bus cross country (Boston to LA) in the winter snows and it was great!! I drove a 1974 VW beetle fully loaded with 2 adults and a couple hundred pounds of college stuff from Central PA to Long Beach, CA, and it overheated in the desert sun. We adjusted to night driving and did fine getting there, but needed an engine rebuild a few months later. Are they safe? Well, I'm still here to talk about it all. I'd say that if you're a good driver and know your car's limits, that helps, however, these days, I feel that older VWs are better for around town, city driving, and they do best from 0-45. I never had an older stock VW bus or bug that could maintain at 65-70 on a freeway for too long. The engineering was for the 1960s driving habits. I have a 1973 Campmobile now and in moderate gusty winds, because of it's extended fiberglass roof, it's downright treacherous. It's hard to steer it straight with a side wind. Other than that, it's great and keeps up with suburb traffic really well. It has the larger 2000 cc engine. The newer larger 1970s models and especially those with the fuel injected engines seem to have more horse power and do better in aggressive traffic. So, now I own a contemporary car for the highways and long distances, and I'm preserving my VW classics, taking care of them. Not going over 50, and preserving their value and charm. I could modify them and all that for performance, but I want to preserve their originality. People LOVE them and they making small town driving a lot of fun! There's a lot of forgiveness for driving a classic car that people tend to love. Here's a picture of my bus used in a local photo shoot for a magazine. We were just going to breakfast one day and got asked out of the blue. Fun! In short, I feel safe around town and under 50 mph. 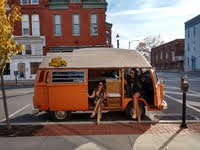 Well I think that virtually no car built in 1975 or earlier with withstand a crash as well as any car built after 2000. This is primarily because cars from 2000 onward ( and well before this too, but not in the mig ‘70’s or earlier) have air- bag protection. Every few years from about 1995 onward air-bags have gotten better, and the number of them, and the proper positioning of them in vehicles has improved...especially the number of air bags. Now, in 2020 most cars will have more than 10 airbags in them. Often many more than ten. So setting airbags aside, this basically leaves structural and impact strength. Both of these things have also improved greatly since the 1960’s 1970’s, and 1980’s. For instance, cars built before 1975 did not normally have side impact beams in the doors. So side on impacts in pre 75 cars are going to be much more heavily damaged than cars with side impact beams. These things noted are enough for anyone to understand why never cars are very significantly safer than about 1980 and older cars. When driving older, but well maintained cars, a drivers ability to drive defensively is the very best way to limit personal injury in the event of an accident, and also does the most to avoid a collision as well. Drive safely and be well.

Guru9TJLNB answered about a year ago

2007 VW beetle convertible hood go’s down I hear the warning chime go’s off after each stop and go for 20 sec. why?

Looking for a Used Beetle in your area?