1996 Chevrolet C/K 1500 Silverado Standard Cab
SB Car Customization
935 12
90,815
tennisshoes about a year ago
Best Answer
To make sure everything will work you will have to
do that.

1 person thinks this is helpful.
17,945
Andrew about a year ago
Best Answer
It's all the same. If it's a 350 go ahead and take the
computer so it's programmed for one.

1 person thinks this is helpful.
1,515
James about a year ago
Best Answer
All Chevy bolt patterns are the same. Different
engines & transmitions bolt togeather, & most use
the same motor mounts too. Use everything that
goes with 97' engine too. 350 for a 305 is a good
choice.


1 person thinks this is helpful.
22,635
Kelly about a year ago
Best Answer
5.0 and 5.7 used the same ECM The 5.0 pcm will
not lean out the 5.7 engine at all. the 02 sensors
will correct the fuel mixture and you will not have
any trouble with running what you have already.
The only reasone you would need to make any
mods to the pcm or the wire harnss would be if you
where going from a 4.3 to a 5.7.

1 person thinks this is helpful.
17,945
Andrew about a year ago
Best Answer
Your telling me a pcm programmed to an engine
flowing 305 ci worth of displacement that uses a
MAF sensor isn't going to tell a difference in
another 45 ci of displacement? The maf reading
alone will be different, the fuel trim tables will be
too lean. It will run, no doubt about that but it won't
be right.

10
454EDDIE 6 months ago
Best Answer
Is the wiring harness the?

17,945
Andrew 6 months ago
Best Answer
Yes, as long as they are the same engine size you'll
be good. Going v6 to v8 would be alittle more
involved. And switching from a 305 to 350 will be
plug and play but I would advise the appropriate
pcm to go with the motor

Muddyblazer about a week ago
Best Answer
I've got a brand new 2000 350 long block what do I
need to do to make it work in my1993 truck
I just bought a 98 chevy silverado 1500 305 5.0
liter v8 vortec that had a lower end knock so i
bought a 96 gmc with a 350 5.7 liter v8 vortec for
the motor. The swap went good and everything
bolted up and plugged in without any problems.
After i got everything bolted down, plugged in and
fluids in it, it started no problem. After driving it a
week now, i believe the pcm has not learned the
difference from the 305 to the 350. I hear it
backfiring when im coasting and the motor cuts
out and picks right back up randomly while driving.
Im looking into having my pcm reprogrammed
locally or putting the prom chip from the pcm in
the 96 sierra in the pcm thats in the 98 and already
programmed to my vin. Will this actually work and
if so do i need to do the crank variation relearn or
any other modification or tuning to make it work?

So, what is the question you are asking? 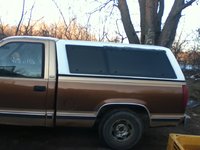 CarGurus has 8 nationwide C/K 1500 listings and the tools to find you a great deal.