i have a 1968 CHEVELLE/MALIBU Bone stock 307 4 wheel drum. 2 barrel carb. Should i do an engine swap and change the brakes to disc? Would a manual trans be a bad idea?

i want a 383 with manual transmission and full brakes all around or 700-r4 but people tell me to keep it original.

Being a long time Chevy man, a low performance 307" won't make much hp. I'd opt for a 1968 engine swap such as a 327-350" & yes keep it with original equipment offered for that year.Some engine dealers will give you back a core charge for that 307. Disc brakes are always a good idea. Many transmissions for '68 were available from a Munci 4-spd to Powerglide, to Turbohydro 350 & 400 series, your choice. Modified 2-spd Powerglide automatics rule for drag racing. You could opt for a 4-spd, but an expensive swap, with bell housing, trans, clutch plate, clutch disc, throw out bearing, clutch fork, linkage, & shifter. I always liked the Turbo 400 automatic in my '69 SS 396/ 427 Camaro, & loved beating-up on them Mopars & Fords.

Learn the difference between "quicker & faster" sure Hemi Mopars are faster top end & IF they had the space (more than a 1/4mi.) But small block Chevy's rev & are quicker to the finish line. Choose the right rear end posi ratio too, like 4:10 to 4:56. Do that Chevelle up right & play "catch me if you can" like I did with my '69 SS Camaro. Intimidation is half the game.

it's your car, build it how you like. disc brakes would be an excellent safety upgrade even if you don't change anything else. worst case, keep anything you take off the car so you can put it back on later if you change your mind or decide to sell.

Need to do some research and decide how much you want to spend, how fast you want to go, what size drums the stock brakes have, which auto tranny (2 or 3 speed) you have... the 307 can actually be made to run pretty good with proper pistons and cam... the rear end gear ratio would need to be changed with any engine for strong 1/4 mile dig... or just leave the rear as is and improve the engine for strong over the road performance... power disc brakes may be a disappointment compared to good functioning manual drums... the discs/calipers used on those cars often weren't big enough to give good stopping power, just better fade resistance in repeated stops... to change to manual tranny, try to pull the entire setup off another car that came with it... that saves money and nothing has to be butchered up to make it fit... can be converted back to auto if want to keep 'original value' with matching numbers... also keep the old engine and tranny for same reasons... if selling car later, mention still have all the original parts stored away...

Is it your car or theirs? Is it your money or theirs? I have a 1967 Chevelle Malibu I bought NEW in Dec, '66. It came with a 327/275 and a PG. Unusual for that configuration, it also came with Strato Bucket Seats and a Center console. I'll be 73 shortly. I was going to do a Full Restoration back to original as EVERYONE said a Restomod would ruin it's Value and Collectability! As I said, I'll be 73 in less than 3 Months! I had a Racing Shop Bore and Stroke my Engine to 355/400 and change Tranny to TH350. I did a Full Body Resto Paint, left the Side Moulding Off for a Cleaner Look. Replaced ALL Emblems with Bright Shiny New Ones! New Bumpers. Re-Chroming Old ones was going to cost a fortune! Bottom Line: My Car; My Money; My Choice. I did save all Original Parts. If one of my Sons wants to spend $50 Grand when I'm gone to put it back "Original", Let 'em Have at It! BTW, I added Vintage Air Gen IV. When I recover Financially in a Few Months, I'm installing Heated Leather Seats and changing to Posi. I don't care what the car is worth for "Resale" when I'm through. It's NOT FOR SALE so that's a moot point to me! Good Luck! 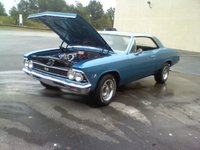 Looking for a Used Chevelle in your area?

CarGurus has 4 nationwide Chevelle listings and the tools to find you a great deal.