Please help to resolve the issue. I am fedup with my grand marquis

Recently i did the computer and found that Oxygen sensor
bank 2 sensor 1 is not working. I am sure this is not
causing the issue because this stops working recently
while the issue i am facing is way long before the oxygen
sensor stop working.

Please help me out as i am really frustrated and i have
googled many forums but did not get proper answer.

KenF answered about a year ago

I think at this point, to really understand what is causing the issue, you should take it to a shop that has the appropriate live scan tool and can find out what is causing the misfire while driving or running the engine. It might be a crank sensor, ignition failure, ECM issue, or anything in between. What you've done so far is a piecemeal tune up, then you began replacing parts hoping to find the culprit. A live scan might show what is triggering the misfire. You can also run tests to help uncover problems. I would suggest: noid light for the injectors, compression test, fuel pressure test, you can rent or buy the test apparatus fairly cheap, a shop of course would have equipment to check a great many more things, and at this point, that might be cheaper than to continue throwing parts at it. Just to give you an example, I had a vehicle with random multiple misfires. Changed everything I could think of, but it turned out it was the ignition module that was failing, only for a microsecond or two, causing the misfire, before correcting itself. Without a scan tool I would never have found that problem.

Do what Ken says but I suspect a bad coil.

mzm4u answered about a year ago

Hi guys. Thanks for the recommendations. I just took the car for scan and its showing only two faults. P0155 showing that Bank 2 sensor 1 is faulty and that rear wheel sensor is not working. Other than that they told me that coils are working fine. Fuel pressure chexk is the last thing i need to do as rexommended but i am not sure if i will find anyone doing it in this part (Gulf Region). Will keep you updated. In mean time if anyone can give recommendation, it will be really appriciated.

Moisture gets into the spark plug wells and shorts out the coils but this can be an intermittent problem. You might want to pull all the coils and check for moisture. 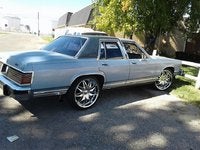 Looking for a Used Grand Marquis in your area?

CarGurus has 6 nationwide Grand Marquis listings and the tools to find you a great deal.