My battery died I guess almost a week ago
because I haven't been driving my car. So today I
decided to go out and jump it off and I can't unlock
the car with the key fob nor with the key. Has this
ever happened to anyone is this normal? What can
I do?

I just went through this 2 months ago. I felt like I tried everything. Locksmith, break-in. Even started to go under the hood to jump start the car by the starter. (Look for YouTube video) Anyway, as I was doing this for hours in the rain in the middle of the night, a taxicab driver stopped when he saw me and asked if he could help. I told him that no locksmith, lock de-icer, WD-40 equivalent spray or breaking in didn't work but I appreciated the offer. He was DETERMINED I was wrong and he could open it. So I let him try. After 30 minutes he got dispatched and was anger that he couldn't help any longer. As he was leaving he said Dang it, I have to try one more time. Frustrated, I just let him do what he thought he had to do. He put in the long pole from his break-in kit again to grab the door handle and to my shock and disbelief just yanked as hard as he could backwards and it popped open. I have had no issues unlocking it since and the car still is dead in the driveway. I can't believe after nearly 2 weeks of video watching, calling everyone I knew to help he was able to get it open in 30 minutes. There is something called a Nader pin that can cause issues. I don't know if that is what caused my problem but this is what fixed it for me. I hope it helps.

I had the same thing happened to me (2012 Mazda 6) but my key fob would unlock the trunk so I let down the back seats and unlocked the door. 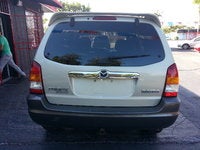 Looking for a Used Tribute in your area?