I have a 2000 GMC Sonoma.  I've bypassed the neutral safety switch with two wires
attached to the starter.  I had been using a push button attached to the two wires, but
recently it has stopped working.  I checked the button itself and it's still good (hasn't
burned out).  Now I've just been getting it to start by sparking the two wires together
while leaving the key in the idle position.  If it sits for a long time (over-night) it will start
right up, but if I turn it off and try to start it again after a few minutes it takes forever.
I've replaced the starter relay in the fuse box but that didn't seem to make any
difference.  The starter itself was replaced a few months ago, but that doesn't mean it
hasn't gone bad.  Any idea what else could be causing the sporadic starting?

This was all done before I started driving it. Apparently the previous owner couldn't narrow down the starting issue so they thought bypassing it was the easiest solution. It has been working without issue for the last year or so.

If you can have it scanned, you could have an ignition fault possibly. The neutral safety switch is connected to the ECM. Here's a schematic hope it helps 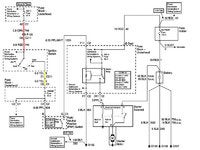 thanks i have the same issue 2001 tahoe I've replace ignition the plug even the safety switch and plug they cut the plug to go with the new motor & trans .i drove it like this for 1 1/2 with some issue here and there with starting just thinking it was the stater .(now the motor & trans have been changed out before i got it have no idea what year it is)

Looking for a Used Sonoma in your area?