my 05 sprinter has no power. just changed 3 injector and injection pump and turbo hose. veryslow accelaration. from 60 to 70 crawls. cant go faster than 70. crawls up hills. please advise.

is there any thing else thats odd? check engine lights, excessive black smoke, any greyish/whitish or bluish smoke? do these vans have mercedes benz diesels in them or do they have the cummins 4bt? if you fill me in a little more ill be able to help

sounds like the cat converter is stoped up,or the timeing is off,jumped time.

i dont think these trucks have cats, some diesels do i know that, but im pretty sure this has the mercedes benz bluetec stuff on it, if so its got a DPF so there could be a problem with the regeneration mode, and its causing high drive line pressures but i think that would turn a CEL on

check engine light is on, freightliner blamed that on the glow plugs.when it cut off the other day black smoke came out on restart.

im assuming this is the mercedes engine then because you said glow plugs. id go get your codes scanned and see what they are. glow plugs wouldnt cause your engine to cut out at all, my bet is you could possibly be having a lift pump issue, does it stumble and then pick right back up? if so thats your lift pump starting to die and your High pressure injection pump is picking up the slack. another thing is when under acceleration do you hear what sounds like a fan blowing under the hood? if so you have a hole in one of the boost tube boots, and your losing boost pressure, that will cause black smoke poor acceleration and possibly could be the reason why the truck wont get up to over 40

Hi Dan, I changed intercooler hoses and resanator today. Still no accelaration. I am thinking of dropping tank and clean that out.

Hi Dan, I just changed resanator and both intercooler hoses, Its still has accelaration issues. I am thinking of cleaning fuel tank next.

have you checked the turbo,loose bolts,crack in it,a wire laying on it burnt rember theses things run very hot.i know this is not a big rig,i had a small crack on turbo on one of my trucks,puffed black smoke out both stacks.also a dirty air filter will cause problems.

I had the same issue, i changed my fuel filter and it took catr ofy problem,

I am going through this same problem now for 3 months. I have changed SO FAR: 1. NEW TURBO AND ELECTRONIC AUCULATOR box and ARM DEVICE. 2. EGR VALVE. 3. NEW BOOST SENSOR. 4. TURBO AIR HEAT REGULATION SENSOR. 5. CLEANED AND CHECKED ALL TURBO HOSES. 6. AIR FILTER. 7. TURBO AIR RESONATOR PIPE TO SOLID ALUMINUM aftermarket PIPE. I am still having the same problem when i climb a hill my 05 sprinter goes limp cant go much more than 62mph on flats. As of right now I am going to clean the manifold taking it off and professionally cleaning the soot and oil build up. If that doesn't solve it going to check the inter cooler for a hole or corrosion. I would check your turbo and especially the electric auculator box that open and close the turbo vanes sometimes these can freeze up and the arm wont move from heat and build up rust corrosion if this happens usually the plastic auculator box gears will break off as well because the box is still working but the arm is stuck so the gears plastic teeth break off inside the box. Good Luck Sprinters are great when they are running but can be a big mystery to fix them so many sensors and parts that go bad on them and overcomplicated systems.

Unplug the EGR valve. If the power returns then you have a bad EGR. Note: the check engine will probably come on. Just see if the power comes back with it unplugged. Common problem on these Mercedes Sprinters.

Hi guys i just bought a sprinter 05 and the guy who sold it to me did desconect the check engine light and I didn't know the van was having problems. Ok so now I am having that when I get a hill the van doesn't have power. Someone can help me to find out what could be the problem. Thank you.

I have a 2008 sprinter that was burning oil at an alarming rate and would also drop into limp mode from time to time, mostly going up hills but on longer rides it would sometimes do it on flats. Just had a new turbo put in, new egr heat sensor, blah, blah, blah. Got it back today and the first hill I went up, limp mode. It does regain acceleration most of the time and did so today but what the hell is going on?

Mgordo78, do you speak Spanish??

I found a temporary solution on the sprinter van, but I don't write really good English to explain how you can try it too..But I did disconnect 3 sensors and the power came back the only problem is that to much smoke comes out.. If some one want to give it a try let me know.

I don't speak Spanish, sorry. I don't want to have to disconnect anything and I don't want smoke, I just want the problem fixed by everything working properly.

Take it to the dealer, then. They will fix it for you. The reason that I was shearing with you was because I tought that you may have something to share.

Dean answered about a year ago

All I see is sprinters with problems. Did anybody get their van running right? 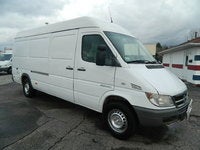 Looking for a Used Sprinter Passenger in your area?

CarGurus has 1 nationwide Sprinter Passenger listings and the tools to find you a great deal.