I just listed my car and got a text from a guy in Maryland who wants to buy it. He says the money is coming via PayPal. I get an email saying the money is sitting in an account but I have to pay him first with a $650 Moneygram for the shipping of the car. There's nothing from PayPal reflecting any of this, just emails. Is this a well-known scam? 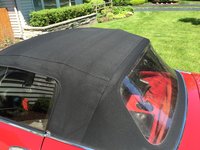 Looking for a Used Spider in your area?

CarGurus has 5 nationwide Spider listings and the tools to find you a great deal.