Not enough information. Is the transmission slipping or does the engine just run really badly? I would check the engine and make sure it is running properly

Is the engine out of timing? Did you change the trans out too?

Is the motor running good the whole time while trying to drive it. If so, then you will need to think about: Governor, Vacuum Modulator or Throttle Cable. These three components are important in the non-computerized transmissions. They provide the inputs that tell the transmission when to shift. The Governor is connected to the output shaft and regulates hydraulic pressure based on vehicle speed. It accomplishes this using centrifugal force to spin a pair of hinged weights against pull-back springs. As the weights pull further out against the springs, more oil pressure is allowed past the governor to act on the shift valves that are in the valve body which then signal the appropriate shifts. Of course, vehicle speed is not the only thing that controls when a transmission should shift, the load that the engine is under is also important. The more load you place on the engine, the longer the transmission will hold a gear before shifting to the next one. There are two types of devices that serve the purpose of monitoring the engine load: The Throttle Cable and the Vacuum Modulator. A transmission will use one or the other but generally not both of these devices. Each works in a different way to monitor engine load. The Throttle Cable simply monitors the position of the gas pedal through a cable that runs from the gas pedal to the throttle valve in the valve body. The Vacuum Modulator monitors engine vacuum by a rubber vacuum hose which is connected to the engine. Engine vacuum reacts very accurately to engine load with high vacuum produced when the engine is under light load and diminishing down to zero vacuum when the engine is under a heavy load. The modulator is attached to the outside of the transmission case and has a shaft which passes through the case and attaches to the throttle valve in the valve body. When an engine is under a light load or no load, high vacuum acts on the modulator which moves the throttle valve in one direction to allow the transmission to shift early and soft. As the engine load increases, vacuum is diminished which moves the valve in the other direction causing the transmission to shift later and more firmly. Is your vacuum from engine attached to the transmission, yours should have the Vacuum Modulator, also may be a good idea to install a new Modulator. Is you 400 making good vacuum? Otherwise I am thinking the governor may be bad, If your engine is not bogging down or having any other issues. Did you do a full trans servicing if not do so and use some Lubegard in it.

And change out the Vacuum Modulator. 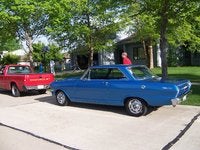 Looking for a Used Nova in your area?

CarGurus has 5 nationwide Nova listings and the tools to find you a great deal.