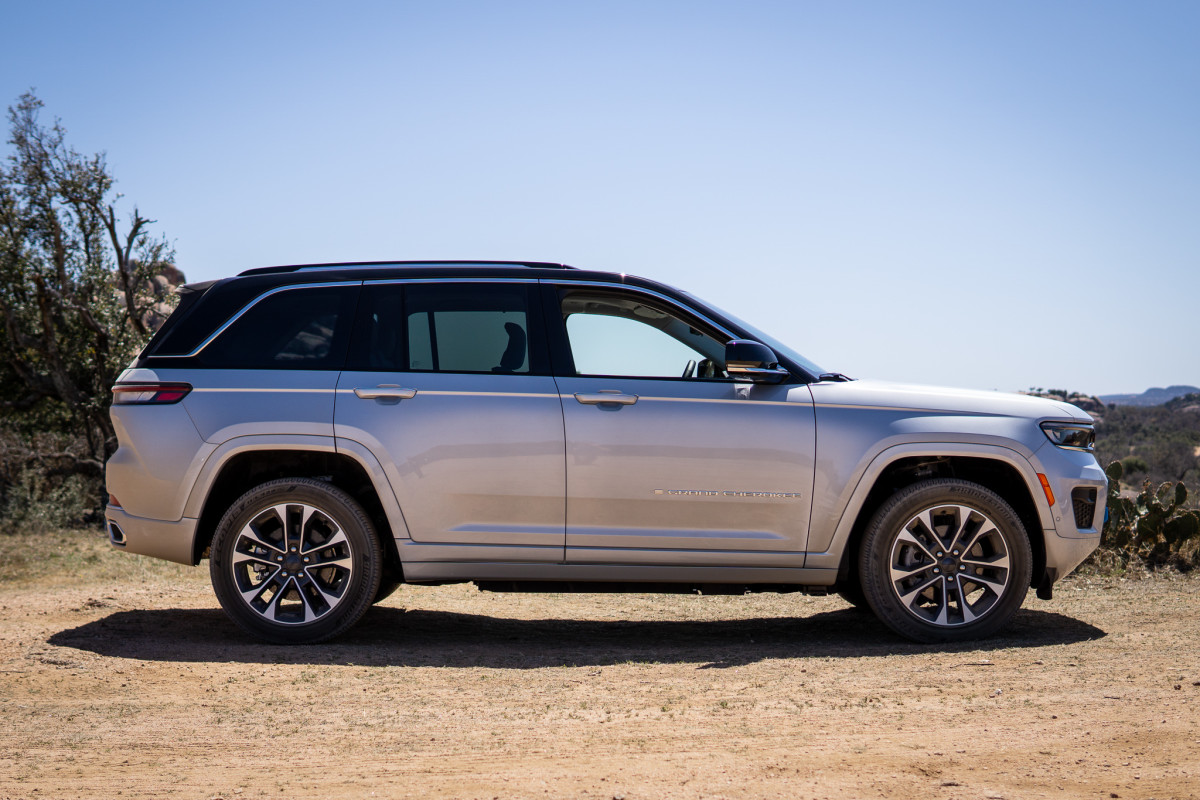 Looking for a New Jeep Grand Cherokee 4xe in your area?

The plug-in hybrid 4xe is the most efficient Grand Cherokee ever—assuming you keep it charged. 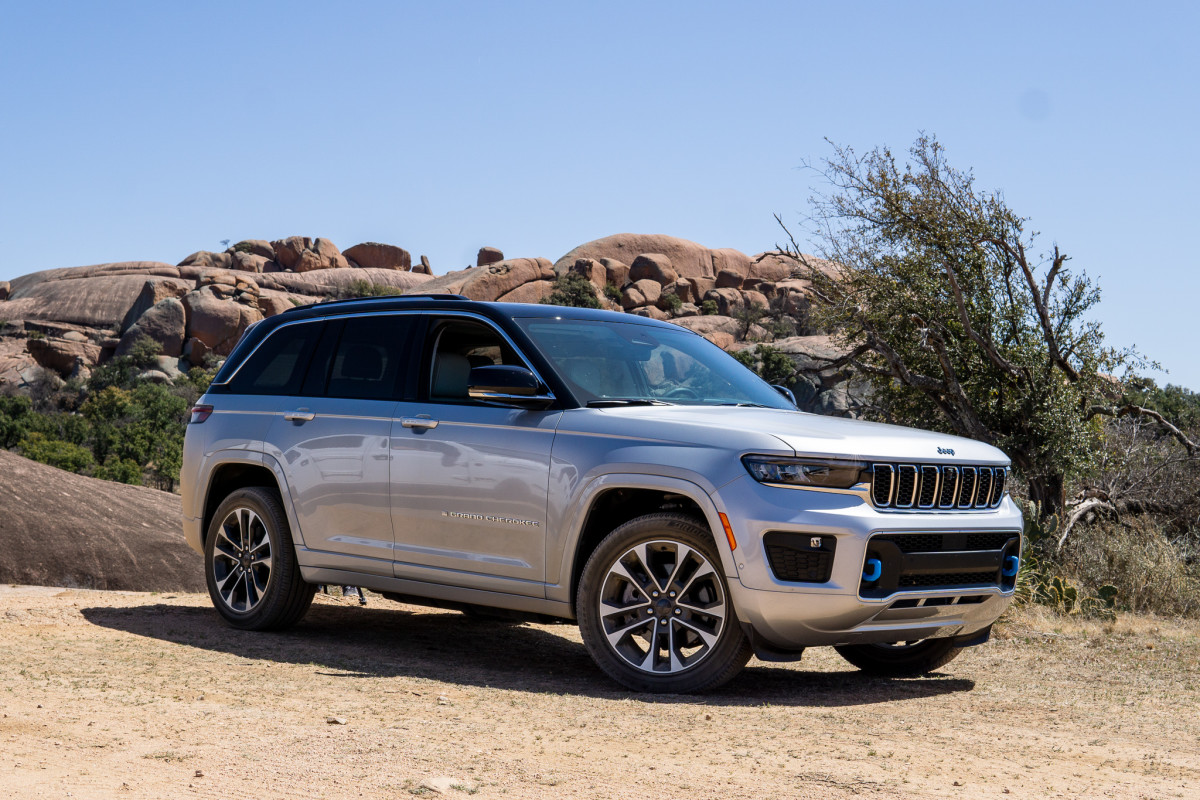 Jeep doesn’t redesign its best-selling model often. But with the fifth-generation Grand Cherokee, the company has re-written a lot of its traditional formula. Shoppers can now find a Grand Cherokee that truly fits their needs, whether that means adding a third row of seats for some extra passengers or slotting in a new plug-in hybrid powertrain to boost fuel efficiency. The all-new 2022 Jeep Grand Cherokee 4xe can go just as far off the path as a Jeep devotee would expect, but now it adds 42 kilometres of all-electric driving to the mix, too. 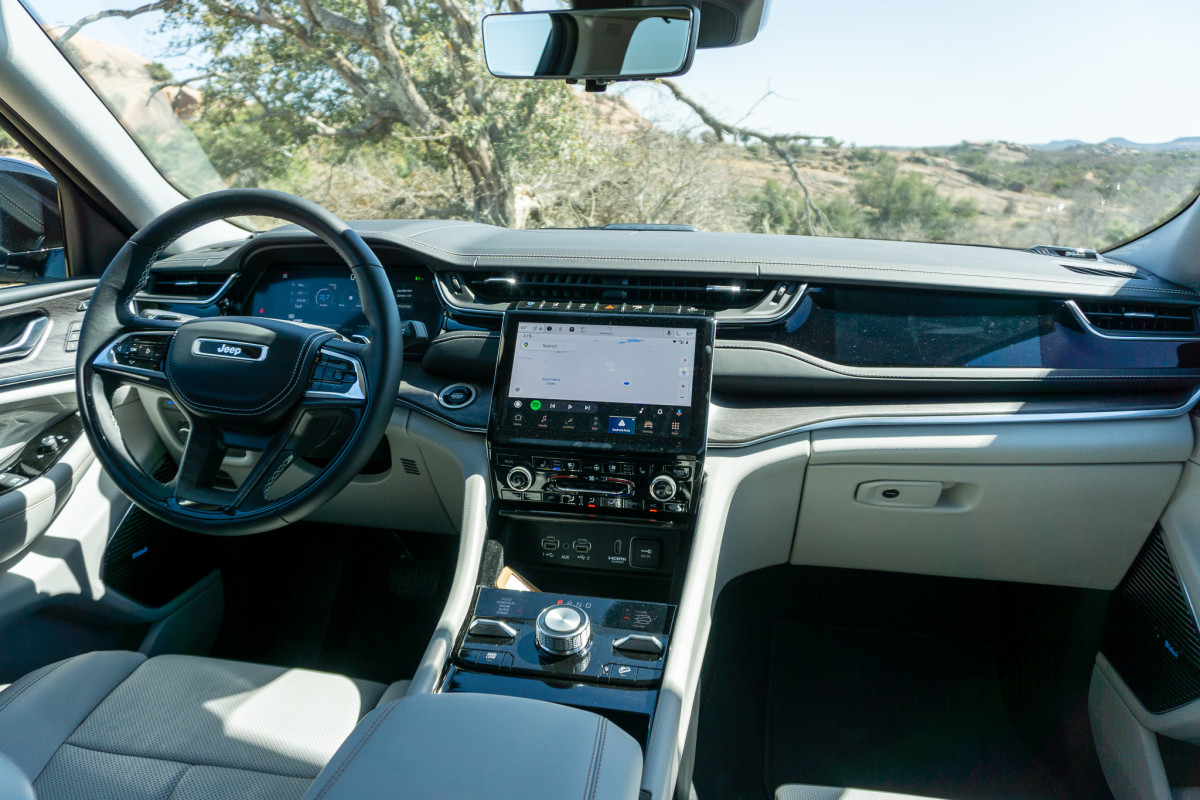 When it comes to designing cars that its fans will love, Jeep is one of those lucky brands that rarely misses the mark. A large part of that luck, no doubt, comes from the company’s adherence to time-tested design cues and familiar styling elements that evoke the heritage and legacy of the brand.

No cue is more significant than Jeep’s seven-slot grille. Sure enough, the iconic design returns to the Grand Cherokee in 2022. The latest generation of the vehicle blends past and present; the grille now boasts active shutters to help improve aerodynamics and fuel efficiency, but it also sports a forward rake, evoking the Wagoneer of yesteryear (and, to a lesser extent, today).

Jeep now sells the Grand Cherokee in both two- and three-row versions, with the latter designated with as “Grand Cherokee L” models. Only gas-powered models are now available with three-rows, however: the subject of this review is the all-new Grand Cherokee 4xe, a plug-in hybrid Jeep sold strictly as a two-row, five-passenger SUV.

The Grand Cherokee 4xe’s trim lineup differs a bit from gas-powered Grand Cherokees. There are no Laredo, Altitude, or Limited trims for the 4xe. Instead, shoppers chose from the base 4xe, Trailhawk, Overland, Summit, and Summit Reserve trim levels.

The car we took out for our first drive was an Overland trim level painted silver with a contrasting black roof and 20-inch wheels. All 4xe models have signature surf blue tow hooks at the front, and the Grand Cherokee Trailhawk 4xe and other trail-rated trims get blue accents on their designating badges, too.

On the inside, one thing is for certain: Jeeps don’t feel like rugged, spartan work vehicles anymore. Even in base 4xe trim, the Grand Cherokee looks and feels incredibly comfortable. At its base MSRP, it’s still darn close to feeling upscale.

The Overland trim sits three trim levels from the top, is priced as such, and delivers nice amenities like leather seats, wood and metal accents throughout the cabin, heated and ventilated front seats, and beautiful bronze contrast stitching across the steel gray upholstery. We also appreciated the nice white piping on the headrests.

That said, we still noticed an astounding amount of hard plastic materials coating the interior, particularly below the hip point. While some plastics are to be expected, plenty of automakers have moved toward other, more soft-touch versions of the material. The bare-bones stuff found in the Grand Cherokee had us worrying about how well it would hold up over time and what sort of squeaks and other noises it would make on a cold winter day.

Where there’s not plastic or leather, you’ll likely find gloss black. This material catches fingerprints and throws glare on sunny days, but it looks sharp when it’s clean (and cloudy). 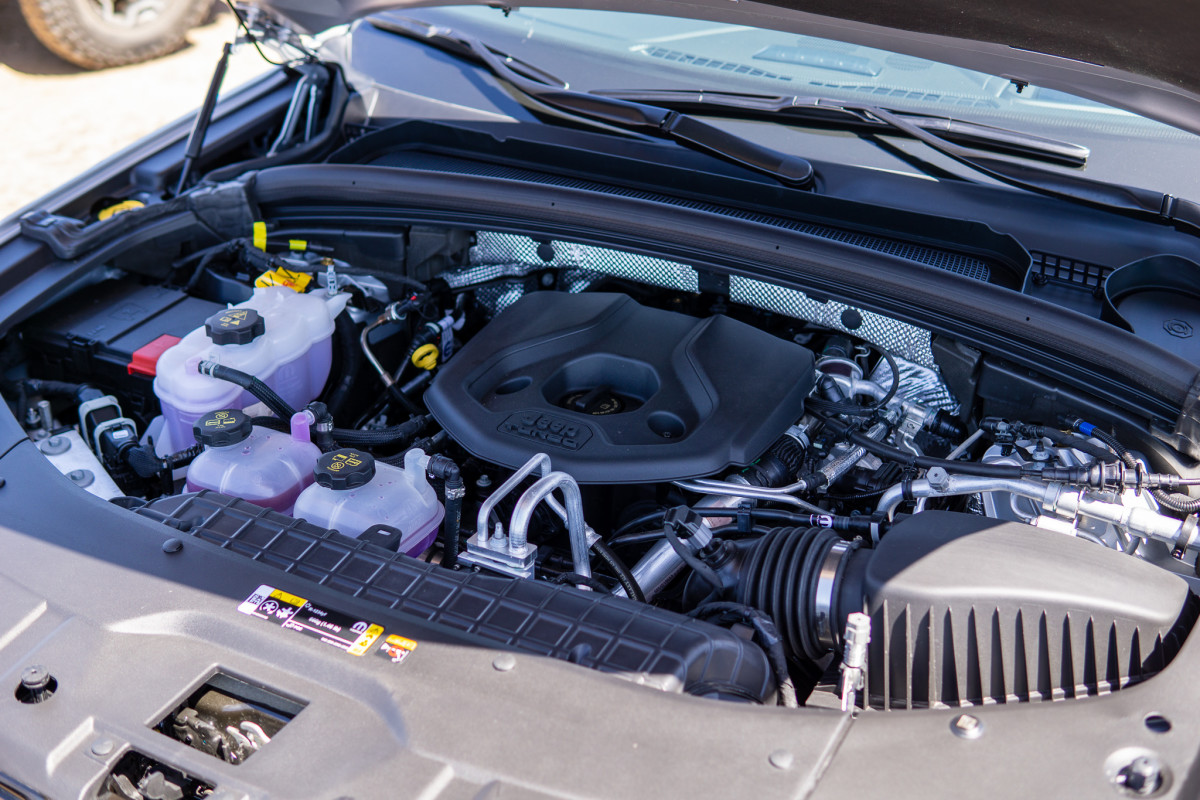 The Grand Cherokee 4xe’s most notable feature is, naturally, its plug-in hybrid powertrain. A 2.0-litre turbo inline four-cylinder engine, assembled in Termoli, Italy, pairs with a 400-volt, 17-kWh battery pack to deliver hugely impressive power specs of 375 horsepower and 470 pound-feet of torque. To put it into context, those figures sit above the company’s 5.7-litre V8’s output of 357 hp and 390 lb-ft of torque.

All that power runs to standard four-wheel drive (4WD) drivetrain. It’s managed by an eight-speed automatic transmission, which has a high-voltage motor-generator mounted to it in place of a traditional torque converter, to the tune of 4.2 litres-equivalent per 100 kilometres. All told the Grand Cherokee 4xe sports a total driving range of 719 kilometres.

Now, before we get too excited about finally getting a Grand Cherokee with good fuel economy, remember that these measurements assume ideal conditions and a battery pack with plenty of charge. Cold weather will undoubtedly have a negative impact on the Jeep’s efficiency, and once the battery runs dry, the vehicle is rated to return a more down-to-earth rating of 10.0 L/100 km.

Keep the battery charged, however, and this is without a doubt the most fuel-efficient Grand Cherokee ever built. The battery pack supplies 42 kilometres of all-electric driving range. That’s seven more kilometres of electric range than you get from the Jeep Wrangler 4xe’s identical powertrain, thanks to the Grand Cherokee’s more aerodynamic styling.

An electronic front-axle disconnect also helps save fuel by disengaging the engine from the front wheels, providing power only to the rears. When the Grand Cherokee senses the need for four-wheel drive, it reengages.

Jeep also programs the Grand Cherokee 4xe with the same E Select powertrain modes that we found in the Wrangler 4xe. Hybrid mode blends battery and engine operation to provide the most efficient driving behaviour, although it prioritizes battery use ahead of the engine, so driving in hybrid mode will result in a depleted battery eventually.

Electric mode employs only the electric motors until the Grand Cherokee depletes its battery, or if the driver makes a sudden call for more power. Finally, eSave mode drives the Grand Cherokee off its 2.0-litre gas engine, saving the battery for later use. eSave can be configured to use the engine as a generator, charging the battery, but doing so at a less efficient rate.

Like most PHEVs and battery electric vehicles (BEVs), the Grand Cherokee 4xe is fitted with regenerative braking. The system operates as you’d expect. If so inclined, drivers can select the Max Regen setting via a button on the dashboard, which will bring the car to a full stop, allowing for one-pedal driving.

Jeep offers the Grand Cherokee 4xe with two off-road 4x4 systems. Quadra-Trac II is the less aggressive of the two. It’s equipped with torque-sensing and an active transfer case to deliver power to the wheel that needs it, but if you’re heading way off the beaten path, Quadra-Drive II will take you farther. Quadra-Drive II builds on the Quadra-Trac II courtesy of an electronic limited-slip differential, a two-speed transfer case, and 2.72:1 low-range gear ratio.

All Grand Cherokees can go places most other family SUVs just can’t go. The 4xe’s electric powertrain adds an interesting element to the experience. There’s no torque build-up when spooling out electric power, so it’s all available right as you begin to depress the throttle. This makes throttle control easier in slow-speed maneuvers. When you need extra grip, there’s also Jeep’s Select-Terrain traction system, which offers specific modes for Auto, Sport, Rock, Snow, Mud/Sand.

Although the 4xe delivers much better fuel economy (with a full battery) than other Grand Cherokees, it suffers in the towing department. Its 2,721-kilogram (6,000-pound) max tow rating is less than the towing capacities for both the V6- and V8-powered models. 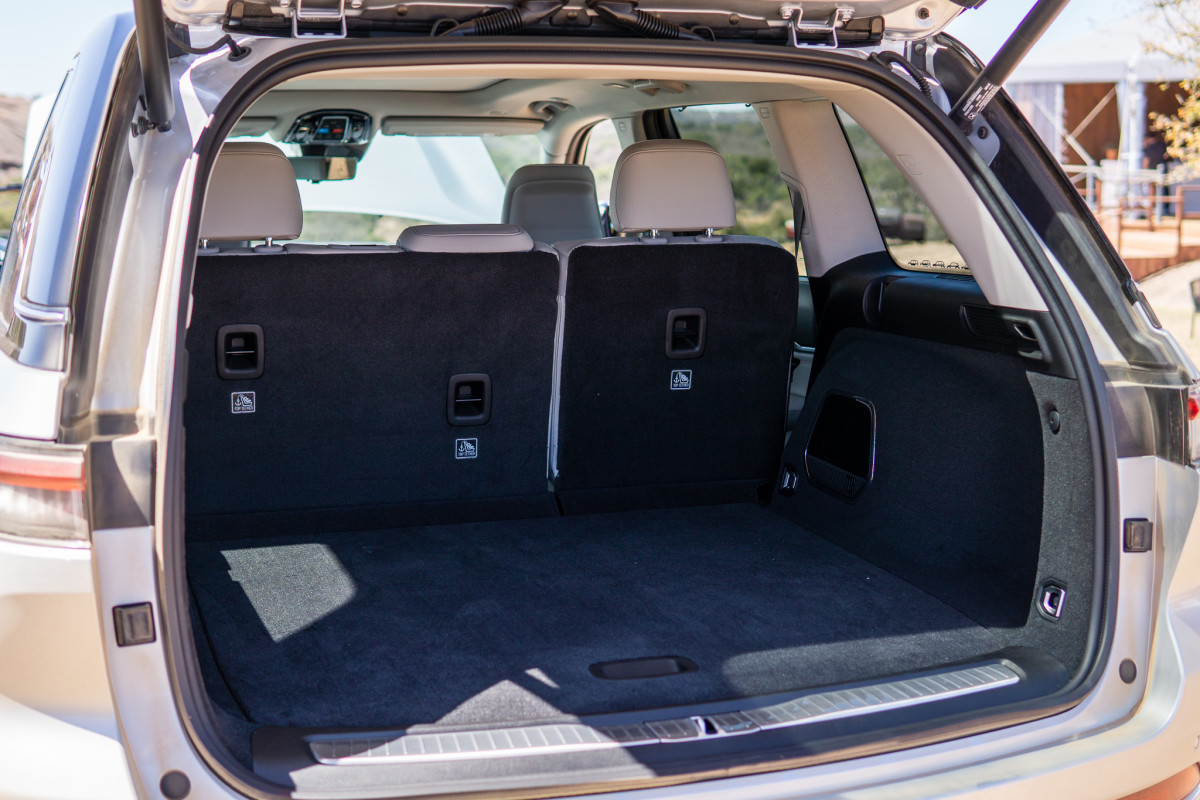 Unlike the gas-powered Grand Cherokee, the 4xe isn’t offered as an L model with a third row of seats, but the upside is that all the existing seats offer plenty of space for passengers.

Folding the second row of seats down opens cargo space up from 1,067 litres to 2,004 litres. These are both incremental improvements over the previous-generation Grand Cherokee. We also never had any issues with head or legroom, either in the front or the back. For a family of four (or less), the Grand Cherokee 4xe serves as a comfortable and capable family vehicle.

The available air suspension provides a quick-down function, allowing the Grand Cherokee to drop from its off-road height to a low position in as little as seven seconds. This is particularly helpful for loading and unloading.

Despite testing the Grand Cherokee 4xe on a swelteringly hot afternoon, we know in our hearts that the vehicle’s standard heated steering wheel would feel like a true blessing come winter. 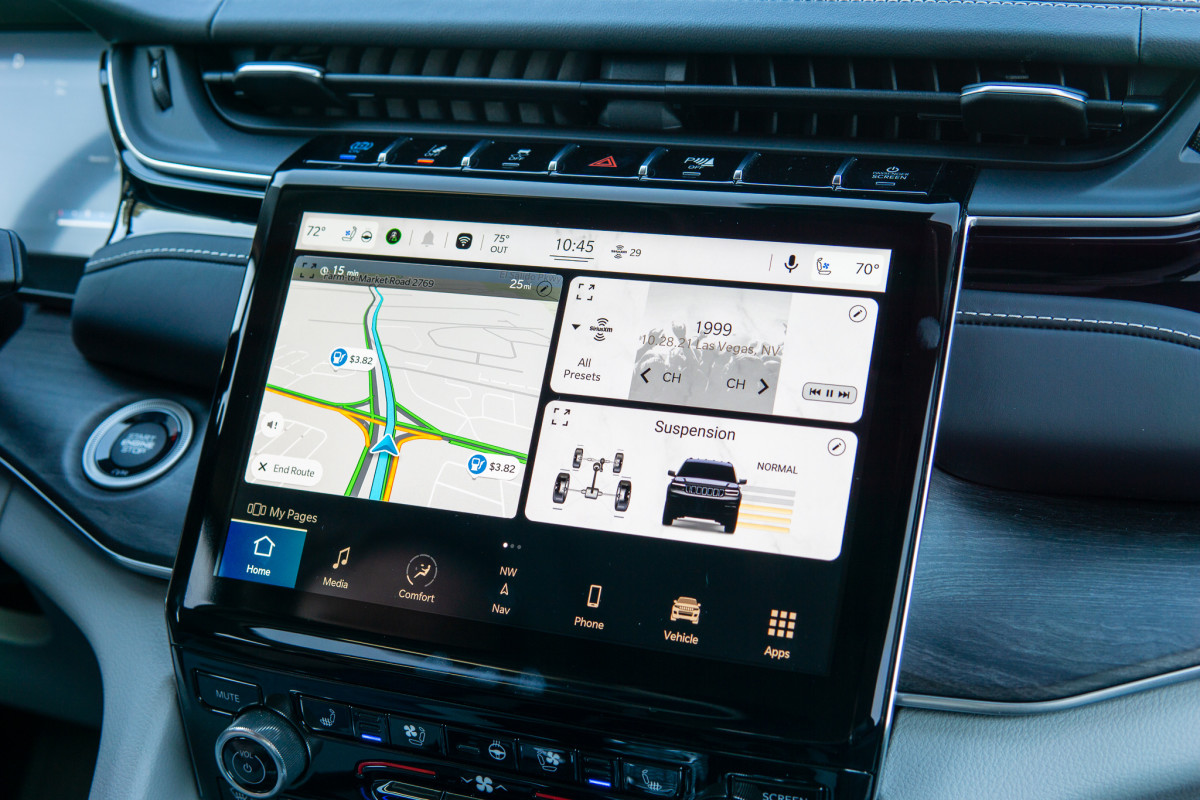 Jeep has delivered a range of great infotainment systems over the years. The latest, Uconnect 5, is easily the best. Uconnect 5 is an Android powered interface with lots of customization options. In particular, we loved the My Pages feature, which allows you to select various displays and widgets to show on templated screen layouts. It’s the sort of feature that helps personalize a car’s user experience, making it feel like your car, rather than one of a million.

In the rear, Jeep offers optional dual rear-seat entertainment screens that run Amazon’s Fire TV for Auto, similar to what we tested in the 2022 Wagoneer.

Finally, the Grand Cherokee 4xe’s incredible 19-speaker McIntosh stereo is worth a special call-out. We would rank this audio system alongside the best in the industry. Unfortunately, it’s not available on the base 4xe or the Trailhawk. It starts as standard equipment on the Overland trim. If you want to enjoy the McIntosh’s auditory bliss, you’ll need to pay. 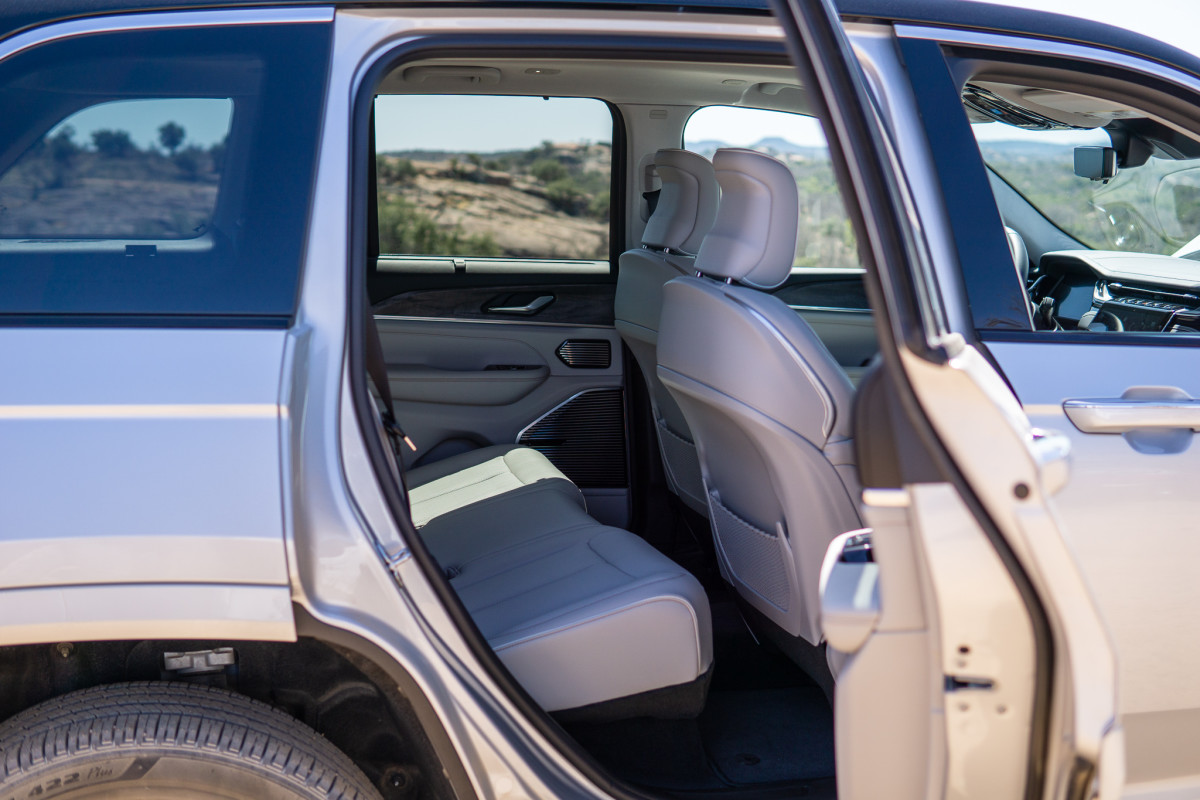 If you want to upgrade further, blind spot monitoring and rear cross-traffic alert start at Overland. Similarly, The super-crisp 360-degree surround-view camera is standard on all trims but the Trailhawk.

Jeep announced that a hands-off driver assistance feature suite would be coming to the Grand Cherokee 4xe, but it requires additional hardware and wouldn’t be available to early buyers via an OTA update. 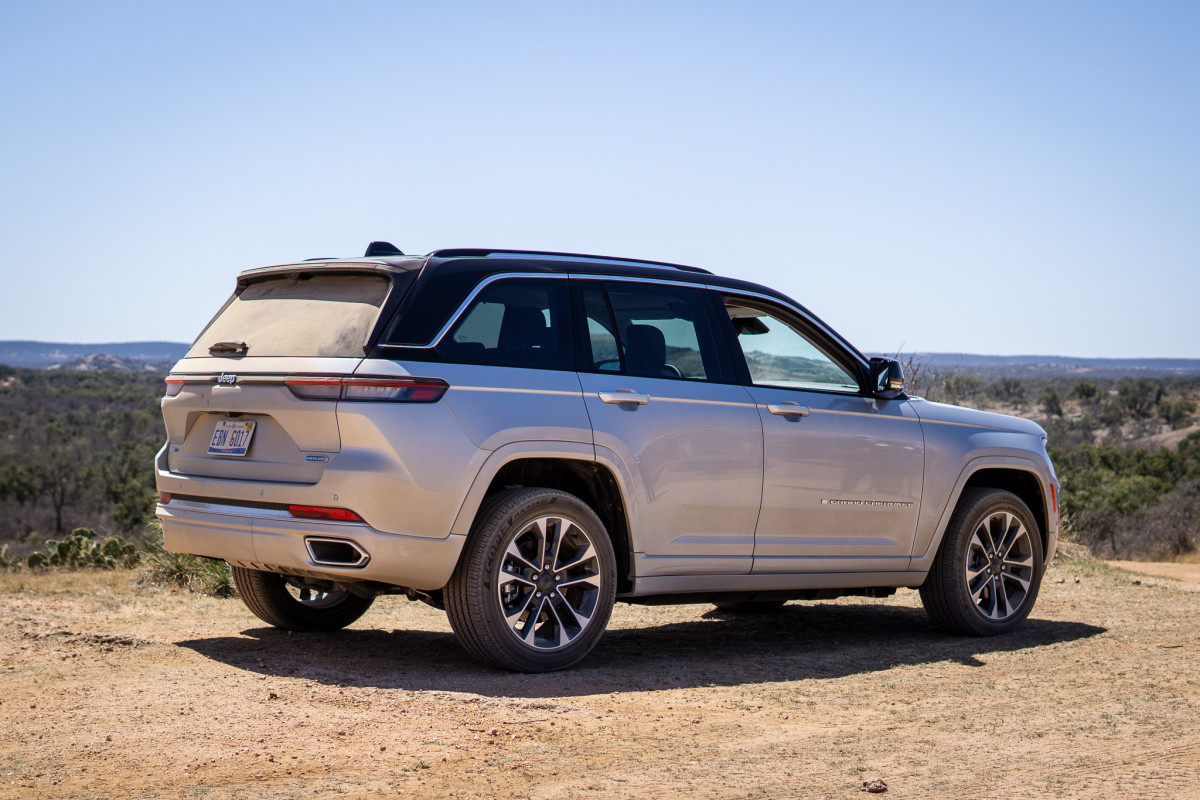 Once upon a time, it seemed you were likely to find a Jeep Grand Cherokee in half the driveways of suburban America. As time has passed, however, the Grand Cherokee has lifted its average price tag and stretched closer to the premium and even luxury vehicle segment.

To wit: the 2022 Grand Cherokee 4xe is not an inexpensive vehicle. The starting MSRP on a base 4xe will run you $75,195 Canadian, plus a destination fee that ranges from $1,895 to $2,795 to deliver it from its Detroit assembly plant to your local dealership.

Granted, a base trim-level 4xe does include a lot of standard features that you’d need to pay to get on a V6 or V8 model, but the fact of the matter is that an electrified Grand Cherokee demands a larger up-front investment than a gas-powered one.

If you can plug your Grand Cherokee 4xe in regularly, you should recoup the price premium if you keep the car for a while. Compare a 4xe with a V6-powered version, which should return 10.9 L/100 km in combined driving: Assuming you drive 20,000 kilometres per year and gas stays around $2.00 per litre, the 4xe’s 4.2 Le/100 km means it will take roughly 8 years before you’ve broken even with fewer emissions along the way. Then again, if you never plug your Grand Cherokee 4xe into a charger, you would never break even. The lesson? If you’re going to buy a Grand Cherokee 4xe, be sure to keep it charged.

musawrmalek Is this hero comes with 3rd row seats ?

Mario Nice where is it at

Exponent9 This review is drawing in very articulate commenters! Can the target audience be trusted with large batteries, though?

Have you driven a 2022 Jeep Grand Cherokee 4xe?

Looking for a Used Grand Cherokee 4xe in your area?