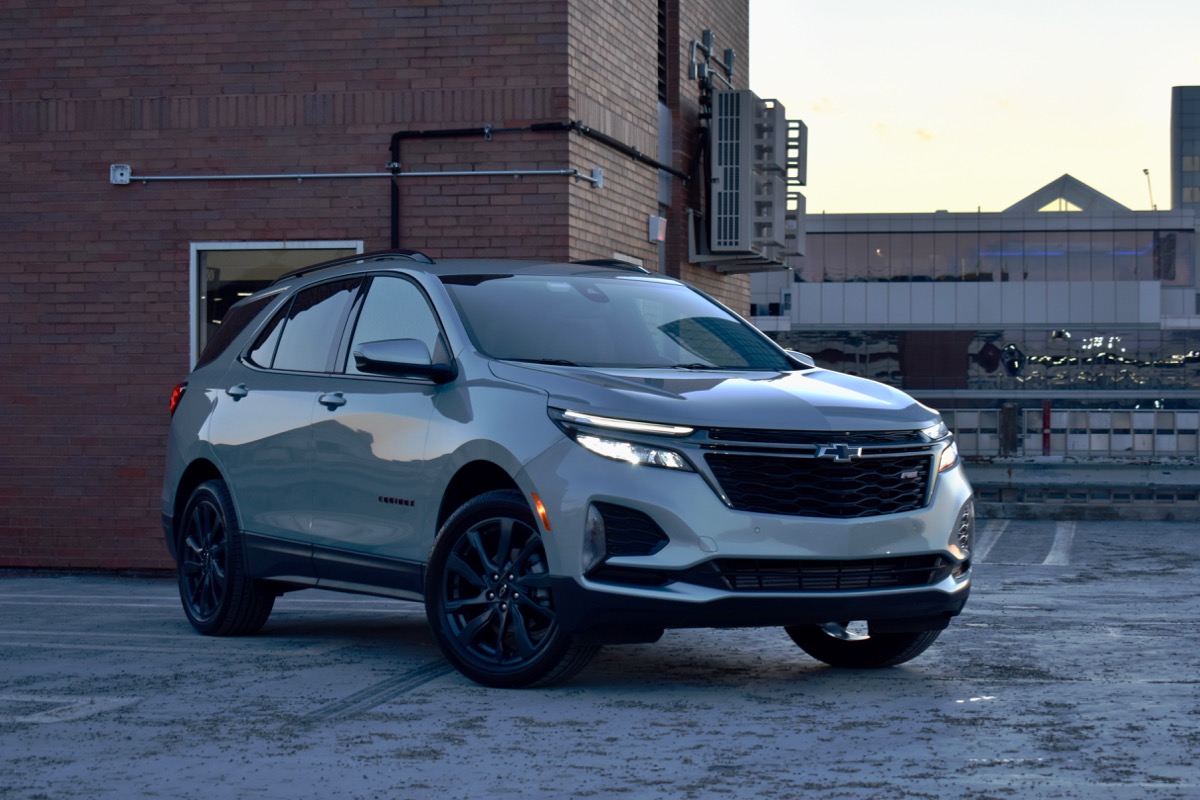 Looking for a New Chevrolet Equinox in your area?

It's fair to say that the Chevrolet Equinox hasn’t weathered the change of seasons with grace. 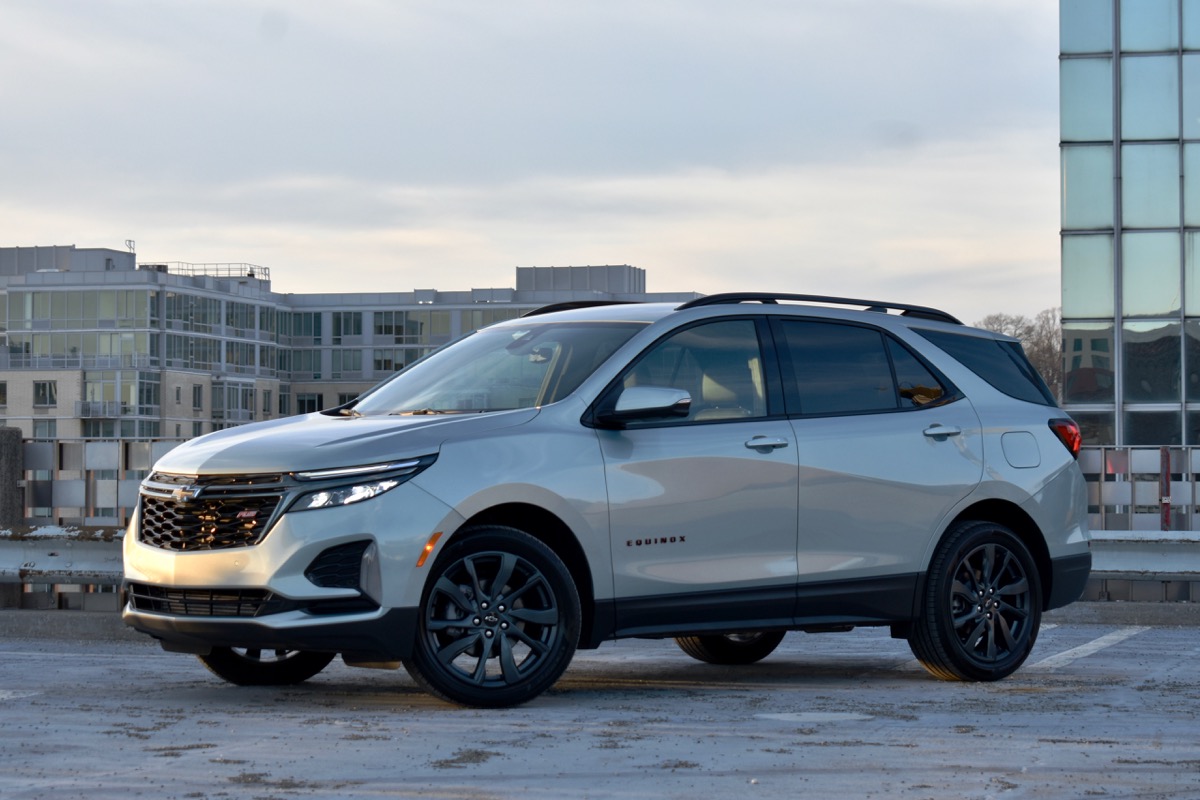 Chevrolet was a pioneer in small SUVs with the original S-10 Blazer, but today’s Chevrolet Equinox is just one of many compact crossover SUVs competing in a market segment that has become the default choice for many new car buyers. Among the Equinox’s many rivals are popular crossovers like the Ford Escape, Honda CR-V, Hyundai Tucson, Kia Sportage, Nissan Rogue, Subaru Forester, and Toyota RAV4.

All of those competitors are much fresher than the Equinox, which was last redesigned for the 2017 model year. This third-generation Equinox was a major leap forward when it launched, as the model it replaced was fairly long in the tooth at the time. But now Chevy risks getting left behind by competitors again.

The Equinox does get a number for small changes for the 2022 model year, including revised styling, a new RS trim with sporty design elements, wireless Apple CarPlay and Android Auto, available front and rear park assist and automatic parking assist, heated power-adjustable exterior mirrors with integrated indicators, and a handful of new colour and interior trim options.

We spent a week with an Equinox RS for this review. The new-for-2022 RS is positioned near the top of the Equinox lineup, above the base LS and LT trim levels, but below the top Equinox Premier model. 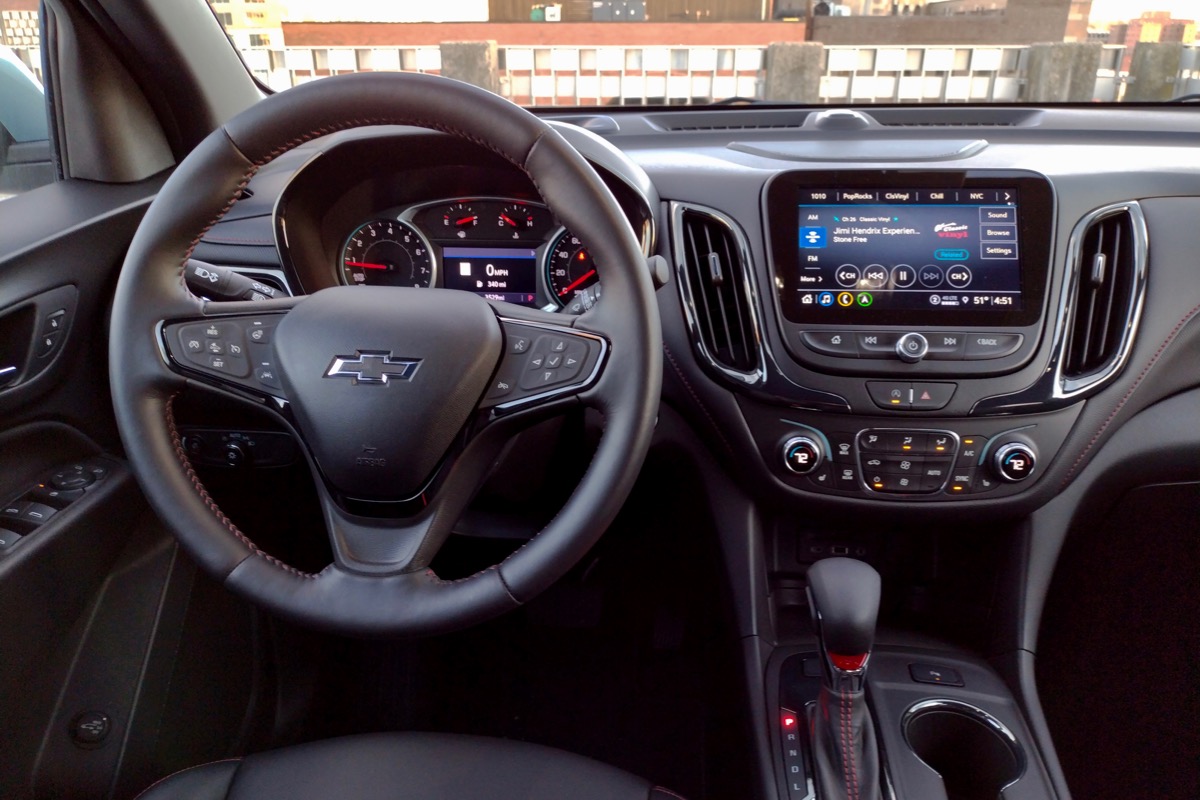 Styling changes for the 2022 model year include a new grille, LED headlights, and LED daytime running lights, along with some subtle changes to the rear fascia. The headlights are now bisected by trim pieces extending from the grille for a somewhat sleeker look. The grille appears more upright, and is now flanked by large fake air intakes, making the 2022 Equinox look a bit chunkier than last year’s model.

The Equinox doesn’t hide the fact that it’s a car-based crossover. Chevy didn’t go for the rugged styling of the Subaru Forester and Toyota RAV4, which try to channel old school truck-based SUVs. However, the Equinox’s tall roof line and puffed up front fascia make it look less car-like than the Ford Escape, so it could be a happy medium for some buyers. We just wish Chevy had given the Equinox some more distinctive styling features, like the Hyundai Tucson’s trick front lighting.

The dashboard is divided into two petal-like elements, with a touchscreen and two large air vents at the centre. It’s a creative design, and all of the individual pieces come together nicely as a coherent whole. You don’t normally see that level of effort in commodity crossovers like this. Materials and fit and finish were decent as well, given the price. Most trim levels get cloth seats as standard equipment, but perforated leather upholstery is available.

The new RS model gets black exterior trim (in place of the chrome on other trim levels), darkened 19-inch wheels, a black interior with red stitching, and a model-specific shift knob. It’s similar to what you get on RS versions of the larger Blazer and Traverse SUVs. We liked the exterior trim, which we felt gave the RS a bit more personality, but the black interior was too subdued for our tastes. It looked like the interior of a taxi. 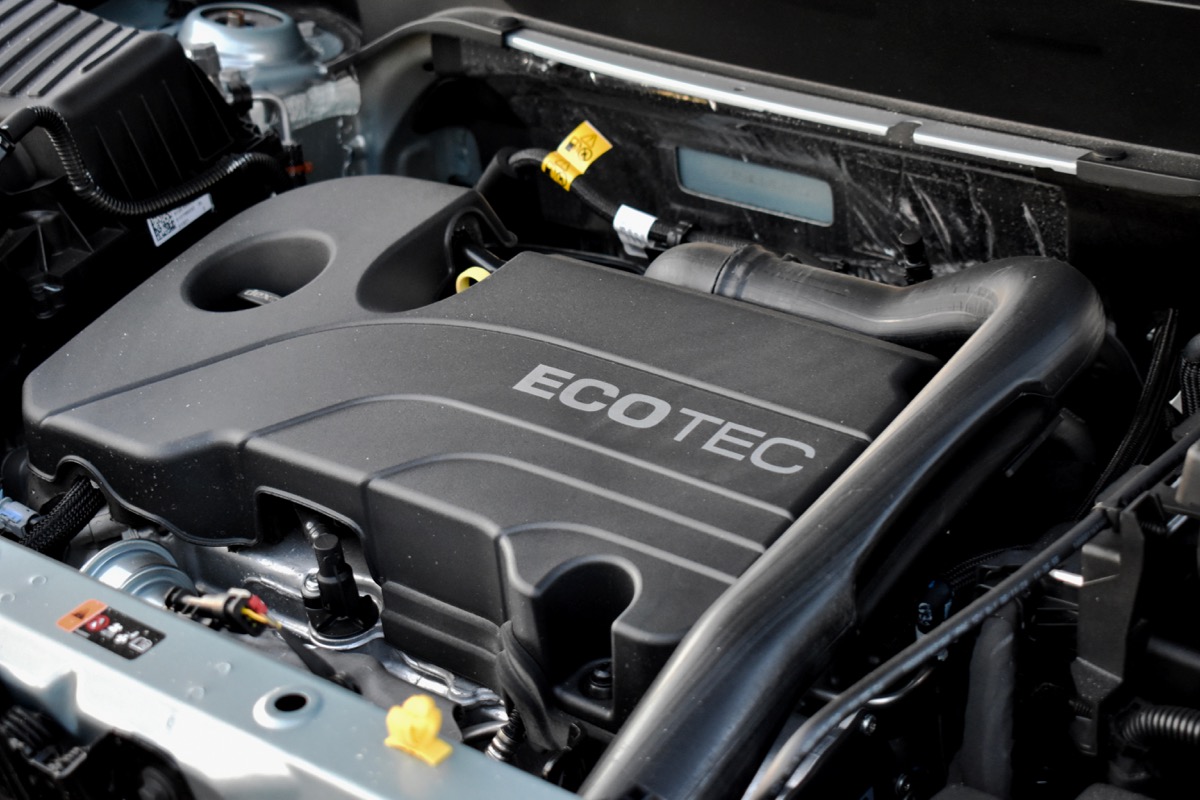 Chevy previously offered multiple powertrain options (including a diesel) but that’s gradually been pared down to one. It’s a 1.5-litre turbocharged four-cylinder engine producing power specs of 170 horsepower and 203 pound-feet of torque. All Equinox models use a six-speed automatic transmission, with standard front-wheel drive (FWD) or available all-wheel drive (AWD).

We did appreciate the Equinox’s torque in stop-and-go driving. With peak torque available between 2,000 rpm and 4,000 rpm, the Equinox had no trouble scooting away from stops. In city driving, that turbo-four engine is your friend.

However, at higher speeds the relative lack of horsepower became apparent. The engine felt coarse and unresponsive at higher rpm, providing the power needed for highway overtaking but complaining about having to do so. We also found the automatic transmission’s shifts to be a bit rough.

Despite its RS jewelry, our Equinox test car wasn’t designed for sporty handling. Buyers who want a small crossover that’s actually fun to drive should check out the Mazda CX-5. The Equinox also lacked the solidity and refinement of the Honda CR-V, although it was decently comfortable even on poorly maintained pavement. 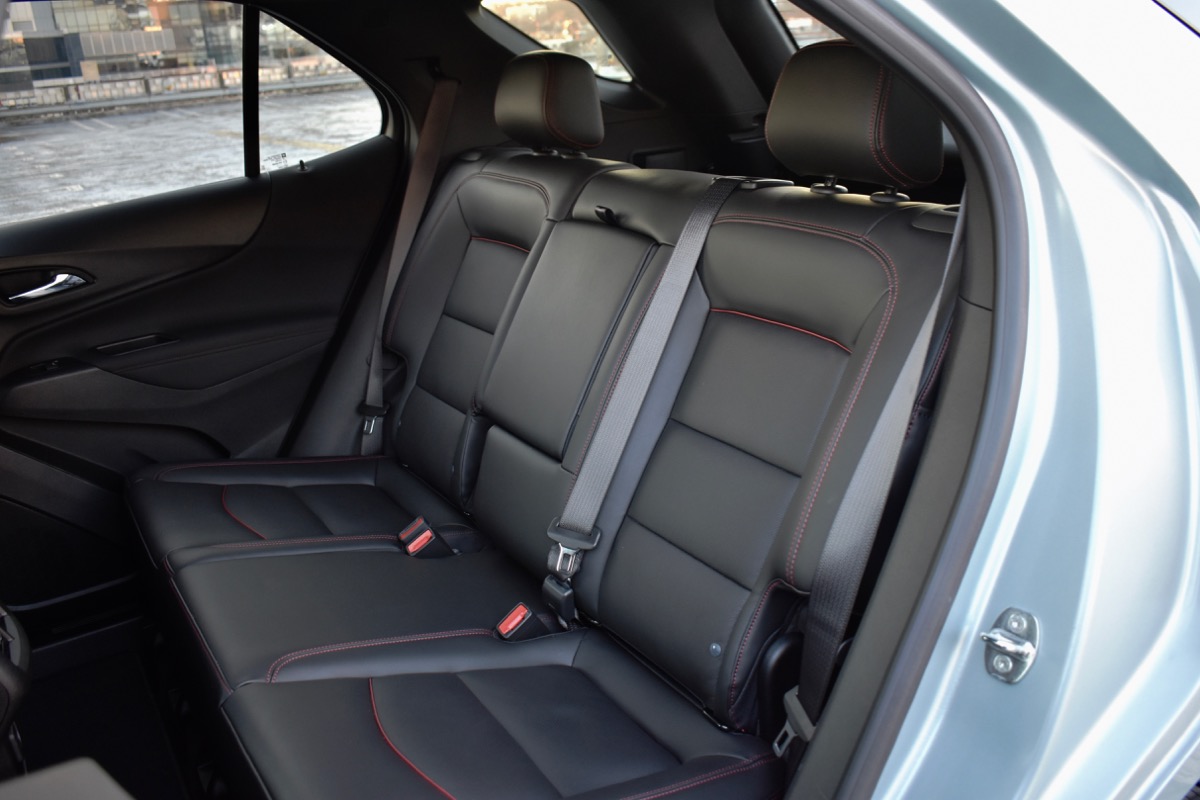 Like most vehicles in its market segment, the Equinox has seating for five across two rows. It offers a decent amount of headroom in both rows, comparing well with rivals. Second-row legroom is also good for this segment, but some competitors offer a bit more legroom for front seat occupants. The numbers matched our experience, as the relative lack of legroom and lack of a telescoping steering wheel made it difficult to find a comfortable driving position, even with the optional power driver's seat.

The Equinox does at least offer a tall seating position, which is one of the main reasons buyers choose SUVs over sedans and hatchbacks. The sloping hood made for an unobstructed forward view. The rear pillars created a bit of a blind spot, but it wasn’t as bad as in some competitors. However, the relatively small rear window hampered rear visibility somewhat.

Chevy clustered buttons and knobs for the climate control (dual-zone automatic climate control is available on higher trim levels) in a lump below the touchscreen that looked awkward, but at least meant all controls were prominently placed. It also means the driver doesn’t have to dig into the touchscreen’s menus to change temperature. Small knobs that display the current temperature were a nice touch. Keyless entry and start are standard equipment.

Chevy’s stated 847 litres of cargo space with the rear seats up and 1,809 litres with the rear seats folded is near the bottom of the segment. A power liftgate is available, but the Equinox doesn’t have a sliding second-row seat like the Ford Escape, or an equivalent to the Nissan Rogue’s cargo-area storage bins. 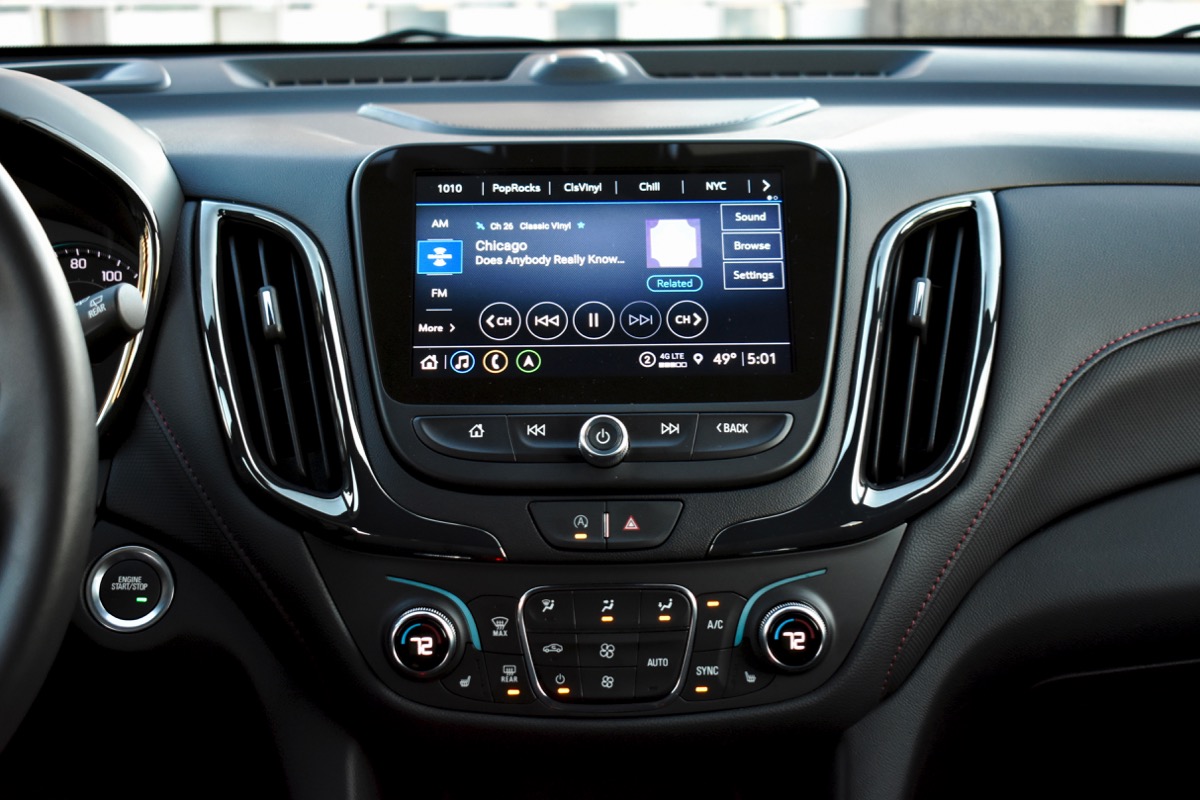 We had no issues with the 8-inch touchscreen in our test car, which was response and easy to use. The Chevy MyLink infotainment system’s large, smartphone-like menu icons are a nice touch, and screen graphics were fairly good for a vehicle in this price range.

The addition of wireless Apple CarPlay and Android Auto for the 2022 model year is also a major coup, as most competitors still require users to plug in. Chevy also offers a plethora of USB ports and power outlets, including two standard USB charging ports in the rear of the centre console. However, the centre-console slot that is the most logical place to put a phone was too small. 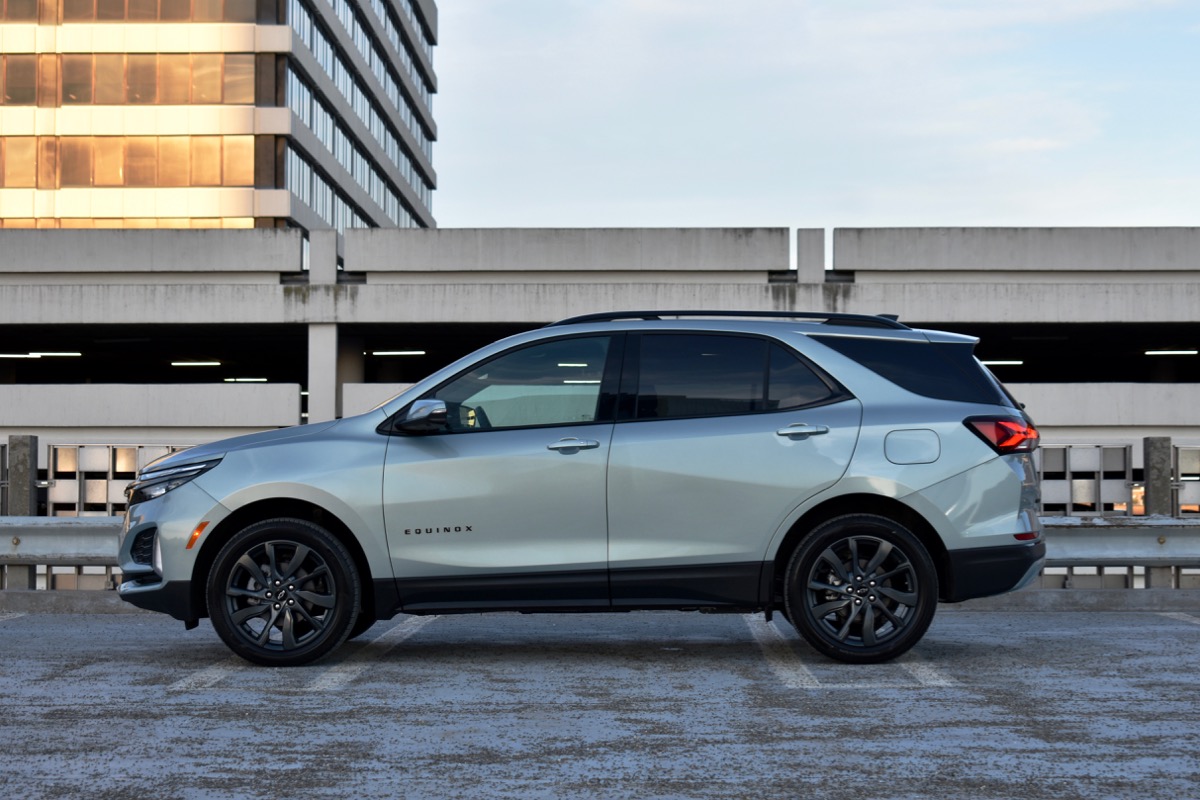 The 2022 Equinox received top “Good” scores in most Insurance Institute for Highway Safety (IIHS) crash tests, but received a “Marginal” rating in the updated side crash test. It received the highest “Superior” rating for front-crash prevention tech in vehicle-to-vehicle situations, and the second-tier “Advanced” rating for vehicle-to-pedestrian scenarios. The Equinox also received an “Acceptable” score for LATCH child-seat anchor ease of use, while headlight ratings haven’t been published.

Optional features include a Safety Alert Seat that vibrates when the various driver aids are triggered, adaptive cruise control, blind-spot monitoring, rear cross-traffic alert, lane-change alert, and a surround-view camera system. As mentioned above, front and rear park assist parking sensors and automatic parking assist join the options list for 2022. It’s worth noting that some of these features—such as adaptive cruise control—are standard on competitor vehicles like the Honda CR-V, Subaru Forester, and Toyota RAV4. 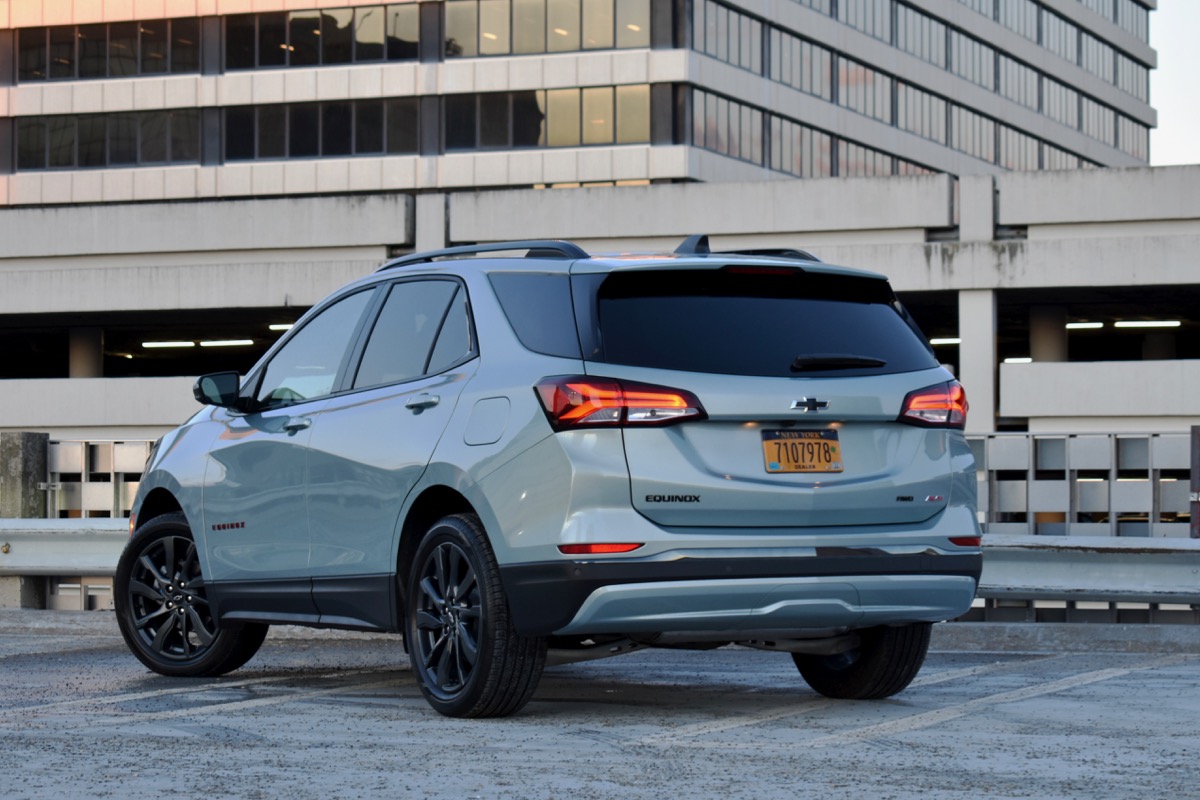 Chevy offers a three-year, 60,000-kilometre, bumper-to-bumper warranty and a five-year, 100,000-kilometre, powertrain limited warranty. That’s comparable to the coverage offered by most other brands.

Pricing in Canada starts at $26,498 for a base Chevrolet Equinox LS model with FWD (all prices exclude the mandatory $1,900 destination charge). That’s in line with other compact SUVs, although the Subaru Forester offers standard AWD and more driver-assist tech at its $29,495 base price. The range-topping Equinox Premier AWD starts at $34,798, so the price range isn’t too drastic. But the price of any trim level can climb quickly with options.

Our Chevrolet Equinox RS AWD test car had a $33,798 base price, but also $4,645 in options, bringing the as-tested MSRP to $38,433 before fees (Canadian, estimated). Some of the added equipment included leather seats, the Bose audio system, an 8-inch touchscreen, navigation, a panoramic sunroof, a heated steering wheel, and a surround-vision camera system.

We didn’t find any major faults with the Equinox, but nothing about it really stood out, either. With so many other small crossover SUVs available, there’s no point in settling. Other crossovers offer more interior space, better tech, or a more satisfying driving experience. We couldn’t find a single area where the Equinox excelled, nor is Chevy’s small crossover more than the sum of its parts. So, we also can’t see a reason to choose it over any of its rivals.

What's your take on the 2022 Chevrolet Equinox?

Have you driven a 2022 Chevrolet Equinox?

Looking for a Used Equinox in your area?