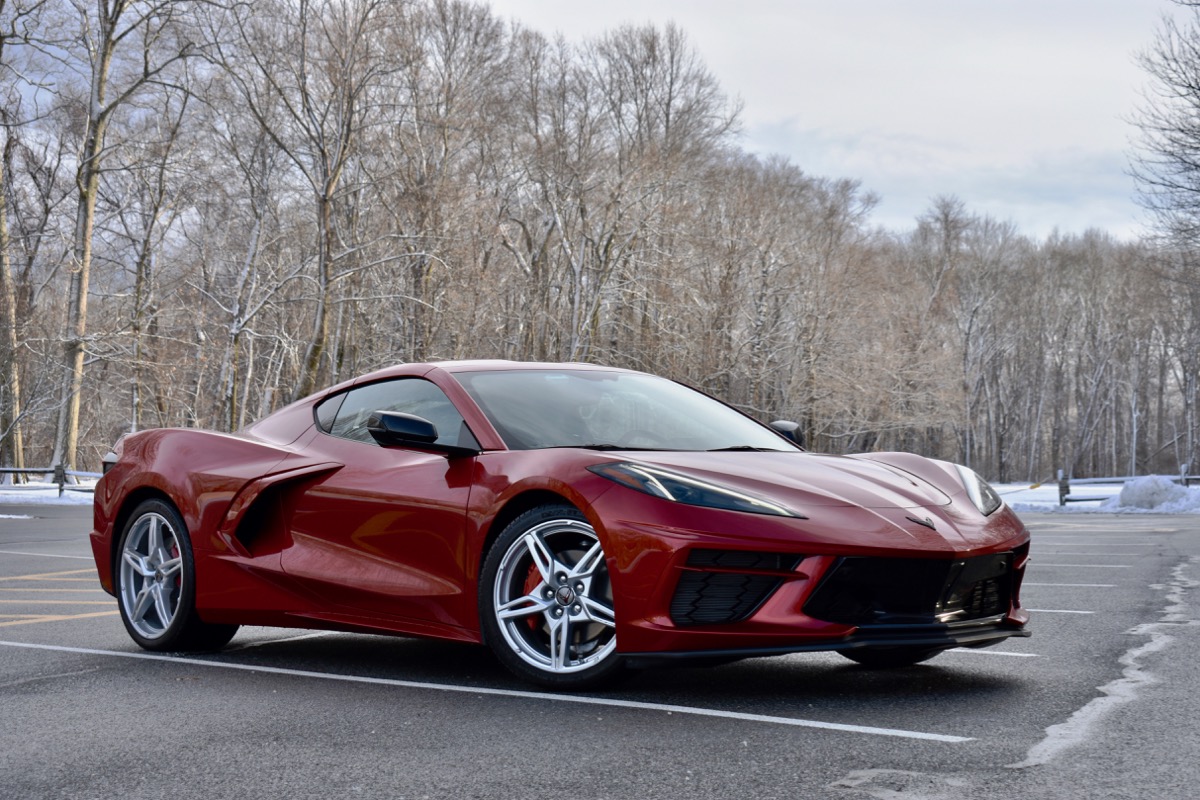 Looking for a New Chevrolet Corvette in your area?

The 2022 Chevrolet Corvette lives up to its billing as “America’s Sports Car.” 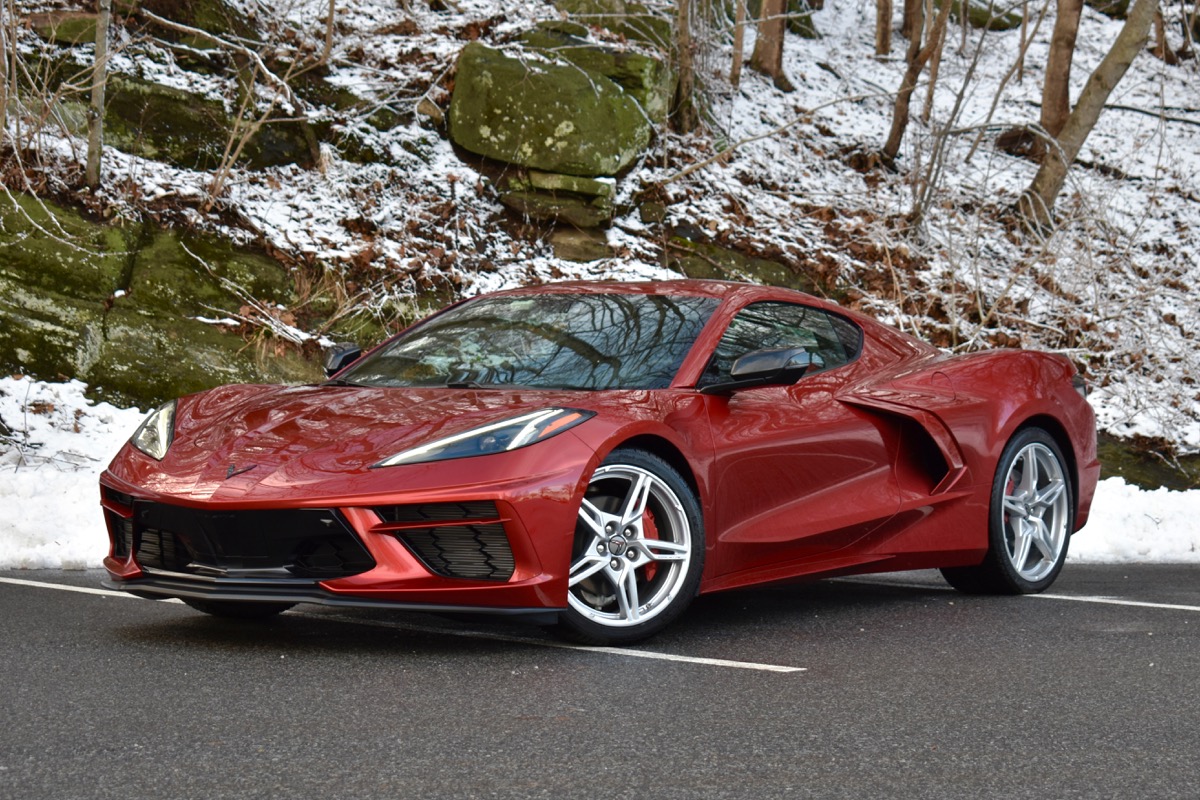 Nearing its 70th anniversary, the Chevrolet Corvette is an automotive institution. While some past Corvette models rested on their laurels, the eighth-generation Corvette C8 is the real deal. The current Corvette Stingray is destined to be superseded by more extreme versions, but even it offers impressive performance and technology, and even manages to be a decent value.

The lineup remains unchanged from 2021, consisting of coupe and convertible body styles, 1LT, 2LT, and 3LT trim levels. A Z51 performance package is available on any trim level, which upgrades the suspension and adds an electronic limited-slip differential and Brembo brakes. Our test car was a 2LT coupe without the Z51 package. 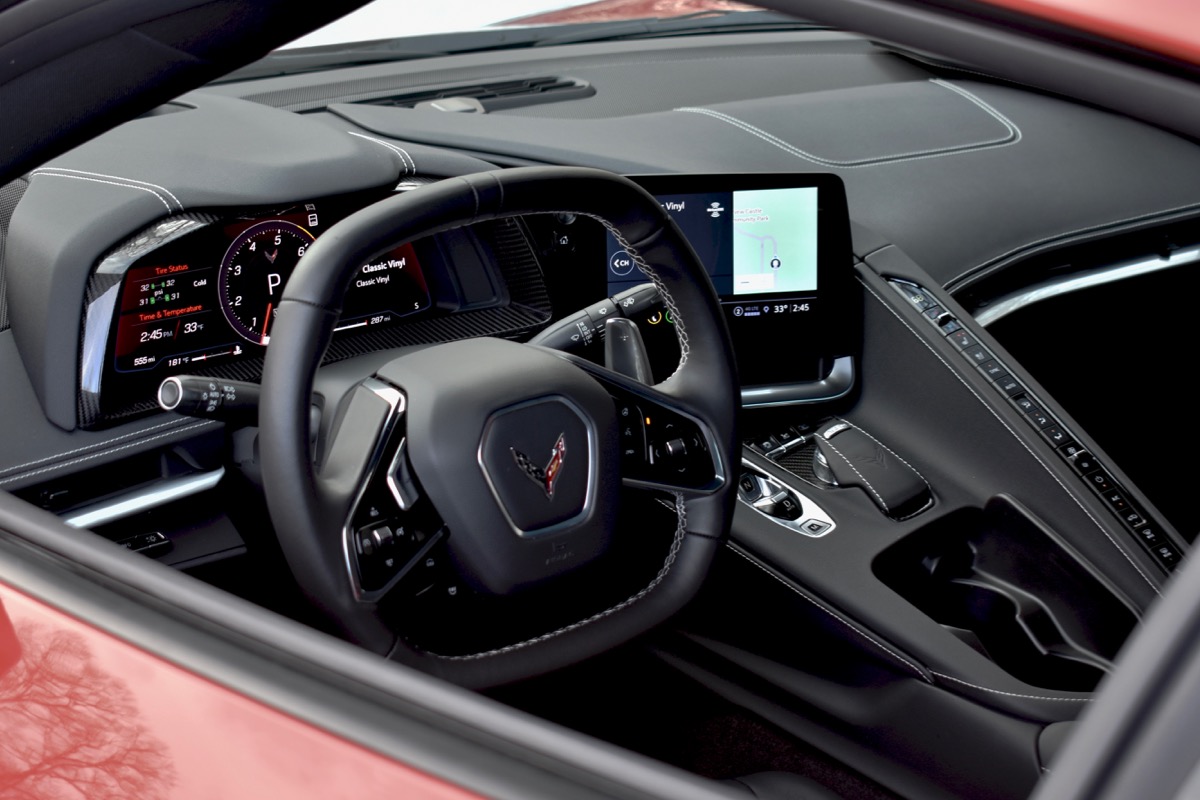 The Corvette does its best Ferrari impression with styling cues like an engine under glass, side air intakes, a pointed nose, and a tapered body that widens at the back. It’s certainly exciting to look at, although there isn’t much to specifically identify it as a Corvette.

As with the previous generation, Corvette coupes get a targa-style removable roof panel for occasional open-air driving. The Corvette convertible gets a retractable hardtop. It uses six electric motors that can lower the roof in 16 seconds at speeds up to approximately 50 kilometres per hour, according to Chevy.

You won’t mistake the Corvette’s interior for any other car’s. The square steering wheel, flanked by a digital instrument cluster and infotainment touchscreen, was a bold design choice. So was the dashboard layout, which references the dual-cockpit shape of classic Corvettes, but takes things a bit further with a spine-like structure that separates driver and passenger, and houses buttons for climate control and other functions. 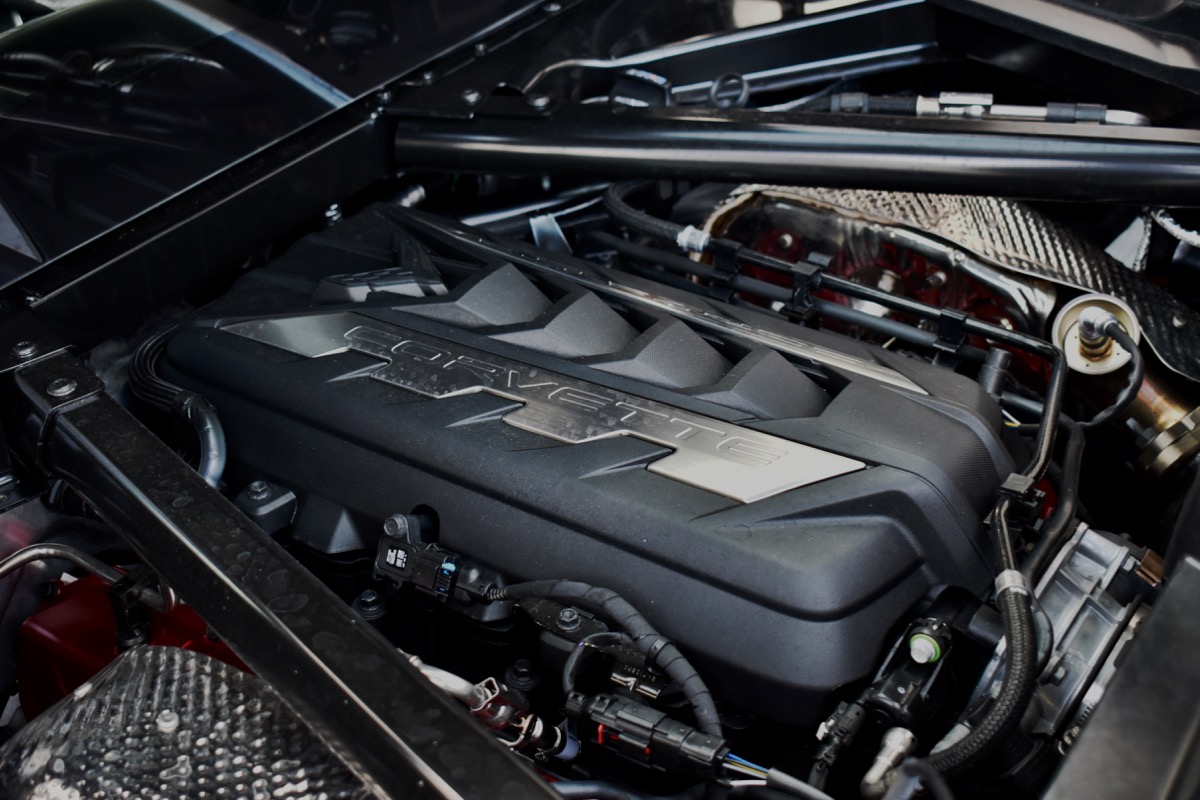 The current-generation C8 Corvette launched for the 2020 model year, shattering tradition by becoming a mid-engine sports car. As a recap, shifting the engine to the middle of the car helps improve weight distribution, as well as traction for the rear-wheel drive (RWD) drivetrain ‘Vette. Granted, the latter won’t really be noticed until the arrival of more powerful models like the 670-horsepower 2023 Chevrolet Corvette Z06.

For now, the standard Corvette Stingray has a 6.2-litre V8 producing power specs of 490 hp and 465 pound-feet of torque, or 495 hp and 470 lb-ft of torque with the optional performance exhaust system. This LT2 engine is one of the ubiquitous Chevy small block V8s, but with alterations for the C8 Corvette’s mid-engine layout, such as different exhaust headers.

For 2022, the engine gets some calibration changes, an upgraded direct injection system, and it makes more use of the Active Fuel Management cylinder deactivation system. It’s coupled to an dual-clutch eight-speed automatic transmission; the manual transmission option went away as part of the mid-engine Corvette transition.

Chevy quotes a zero-to-96 km/h (60 mph) time of 2.9 seconds, a top speed of 312 kilometres per hour, and 11.2-second quarter mile time (at 194 km/h) for cars equipped with the Z51 performance package. That’s only 0.2 second behind Porsche’s claimed time for the 911 Turbo, which costs almost three times as much as the Corvette. Even without it, our 2LT test car felt plenty quick, as you’d expect of a two-seater with nearly 500 hp. Plus, it’s hard to beat the sound of a Chevy small block. It’s like a movie sound effect in real life.

The Corvette isn’t just a dumb muscle car, either. For a powerful car with a fairly large footprint, the Corvette feels playful and approachable. The steering is communicative and precise, and the chassis is always eager to change directions in cornering, but the Corvette doesn’t have the nervousness of other mid-engine cars with similar power. It’s fun without being intimidating.

Based on a previous track experience with a mechanically similar 2020 Z51 model, we think the setup may not be sharp enough for the most hardcore track-day enthusiasts. But overall, we’ve found it remarkably easy to get the most out of the Corvette, and it still feels exciting at more restrained speeds.

Equipped with the optional Magnetic Selective Ride Control suspension, our test car was also an excellent daily driver. It was remarkably comfortable on winter-ravaged roads, absorbing bumps and potholes like a luxury sedan. We also got the noise that we wanted to hear—the engine—without excessive wind noise or tire roar. Some sports cars will leave you tired and worn out after a long drive. Not this one. 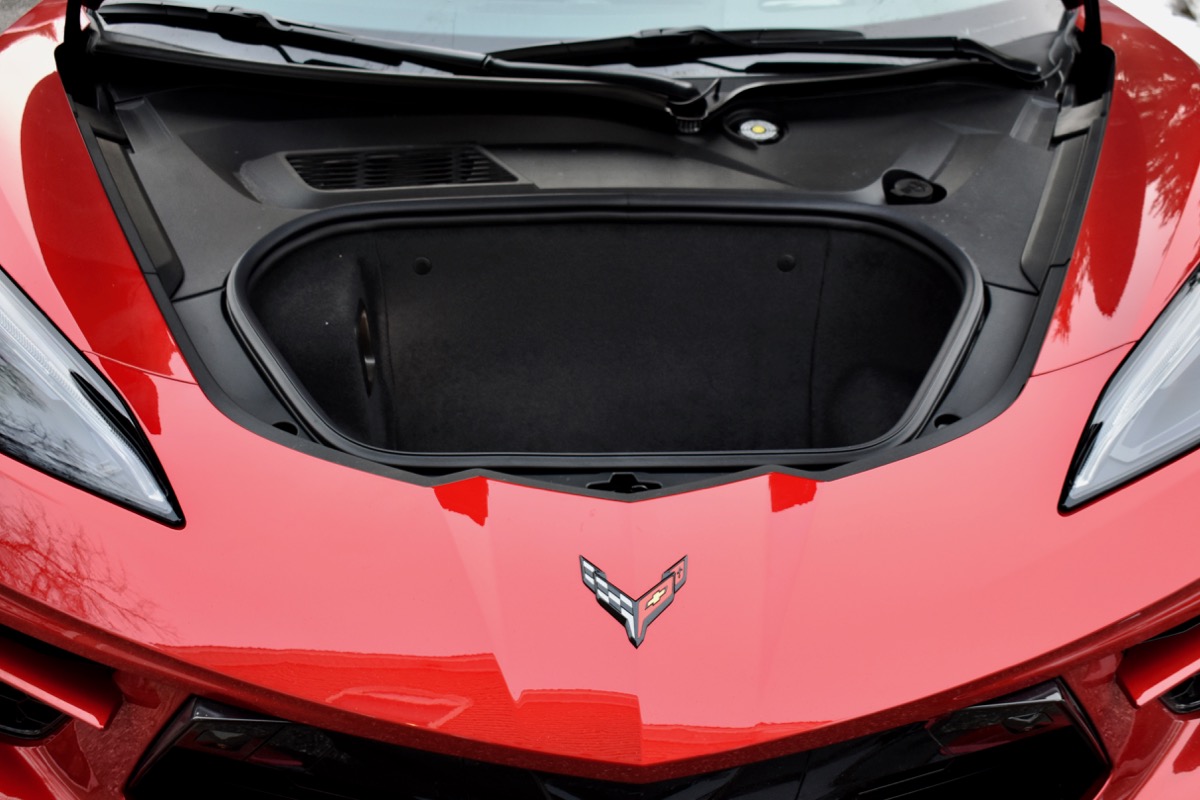 A two-seat sports car was never going to be terribly practical, but Chevy did its best. Because of its mid-engine layout, the Corvette has two trunks: one in front, and one all the way in the back, behind the engine compartment. Together, they have 357 litres of cargo space, according to Chevy. That’s actually a bit less than the previous-generation Corvette’s single rear trunk, but the rear trunk is capable of holding a set of golf clubs (the classic sports car trunk-space metric), Chevy claims. The front trunk can also hold an airline carry-on bag.

However, if you want to take the roof off, it takes up the entire rear trunk, reducing cargo space significantly. Both trunks are also oddly shaped. The front trunk is deep, but with a narrow aperture. The rear trunk is wide but narrow. Because the Corvette only has two seats, with an engine behind them, you also don’t get vestigial rear seats that can be used as a parcel shelf, as in a Porsche 911.

The Corvette is about driving, though, not hauling cargo, and Chevy’s design decisions work very well for that job. The square steering wheel provides an unobstructed view of the instrument cluster without being awkward, including for hand-over-hand maneuvers. The touchscreen is easy to reach and angled so that it can be easily viewed at a glance. The arched centre console also put controls within easy reach.

Rear visibility is compromised by a narrow rear window and thick pillars, but that’s to be expected in a car with a large engine right behind the passenger compartment. Large, well-placed mirrors help with that somewhat, and the Corvette can be equipped with a rear camera mirror and front camera. Forward visibility is excellent. The driver isn’t positioned too far back from the windshield, and it is easy to estimate where the front of the car ends.

Passengers probably won’t feel as comfortable, however. The Corvette’s driver-centric cockpit layout means the touchscreen and controls are turned away from the passenger. Changing the temperature or grabbing a beverage in the cupholders involves reaching over the dashboard’s central spine.

Our test car had the optional GT2 bucket seats. They offer more bolstering than the standard seats, but with enough cushioning to still be comfortable. Power adjustment is standard, with lumbar support optional. A standard power tilt/telescope steering column helps with finding the best driving position. 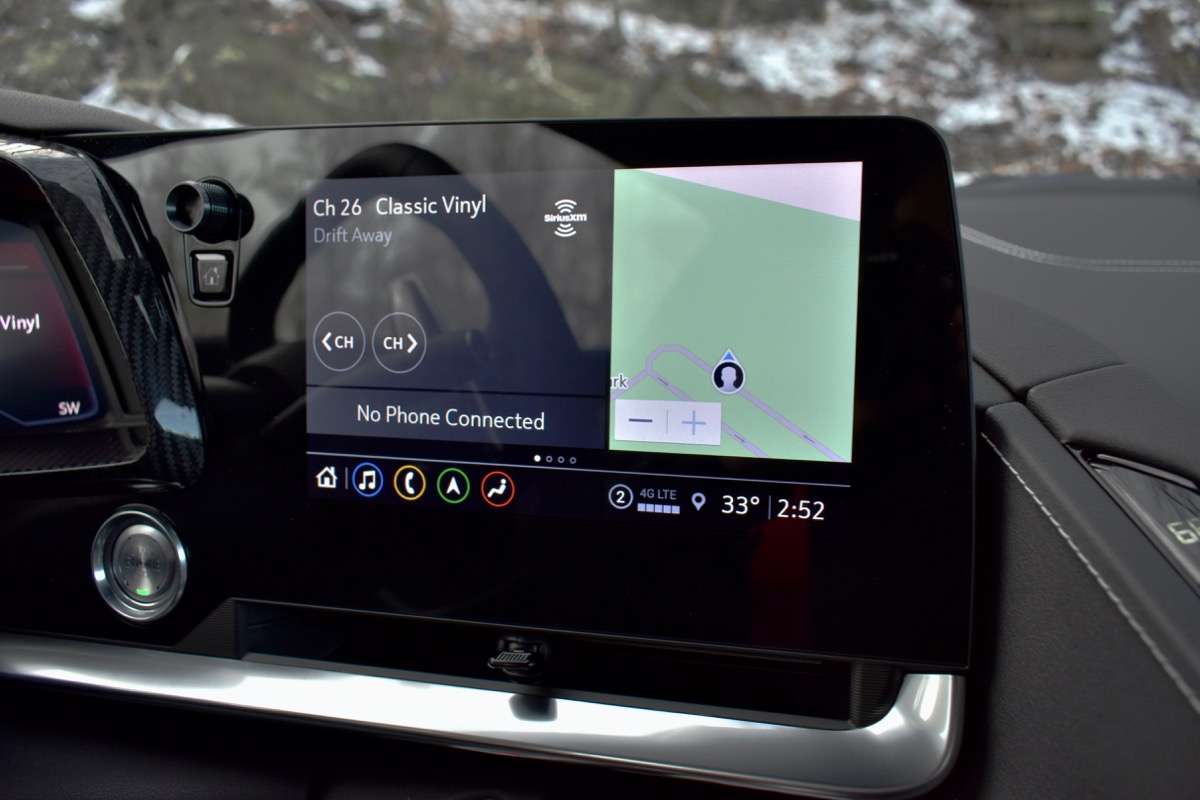 All Corvette models get a standard 8-inch touchscreen and 12-inch digital instrument cluster, with wireless Apple CarPlay/Android Auto connectivity, Bluetooth, SiriusXM satellite radio (with free trial) and a built-in WiFi hotspot. Navigation is standard on all trim levels except the base 1LT, and a head-up display is also available.

We found the infotainment system easy to use, with simple graphics that were easy to read at a glance. Chevy also doesn't bury important functions in endless submenus, and it left climate control and audio volume to analog controls on the centre console.

Base 1LT models get a 10-speaker Bose Premium audio system; others get a 14-speaker Bose Performance Series system. Our 2LT test car had the 14-speaker system, which sounded decently good, but was always fighting a losing battle with the engine sitting a few inches behind the driver’s ears.

Like the previous-generation Corvette, the 2022 model gets Chevy’s Performance Data Recorder, which can capture dashcam video and data traces from track sessions. It can help drivers improve their technique at the track, just like pro racers do. The latest version added 1080p resolution and a dash cam mode for on-road driving.

The Corvette can also be equipped with a front-end lift system to avoid scraping bodywork on steep driveways. It can raise the nose 40 millimeters, and can remember up to 1,000 locations, so it will work automatically at your own driveway or any other places you might frequent. 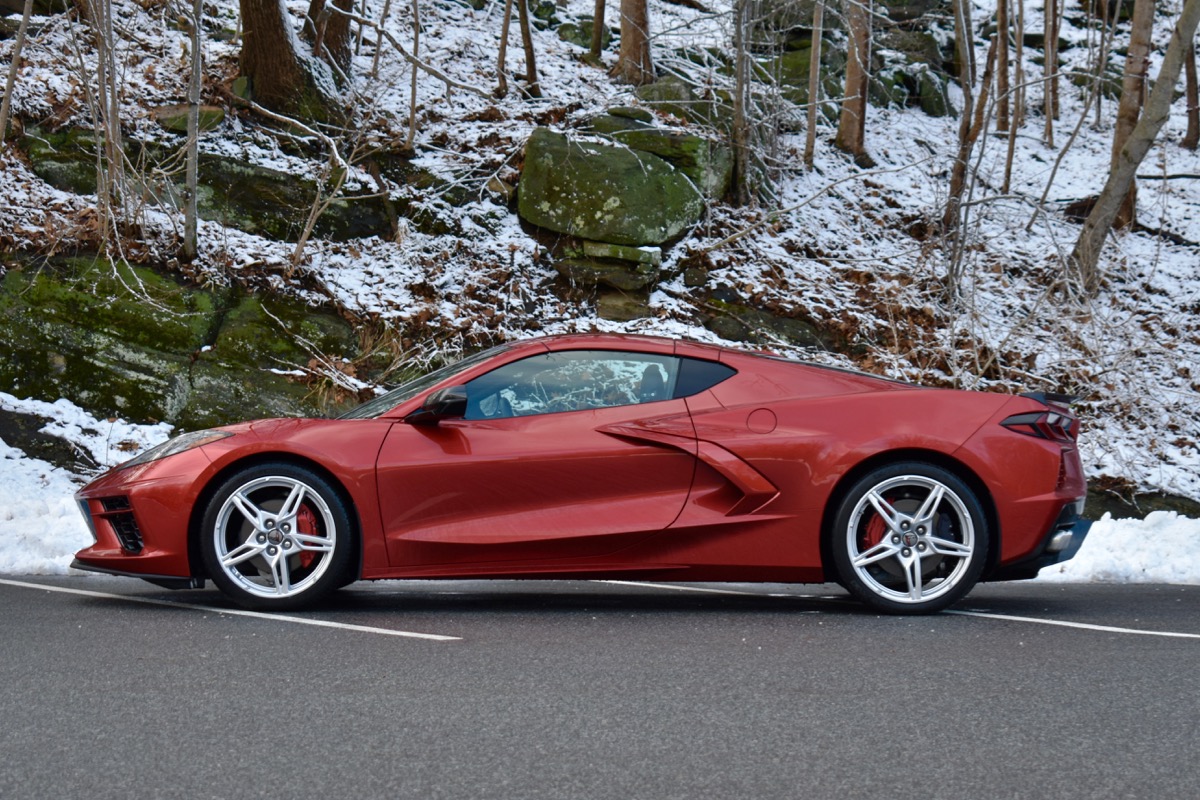 Typically for a sports car, the Corvette is light on driver-assist tech. The only notable features are blind-spot monitoring and rear cross-traffic alert, which can be very helpful overcoming the Corvette’s limited rear visibility. However, these safety features are not available on the base 1LT trim level.

Crash-test ratings from the Insurance Institute for Highway Safety (IIHS) National Highway Traffic Safety Administration (NHTSA) aren’t available at this time. Sports cars like the Corvette aren’t a priority because they sell in low volumes. 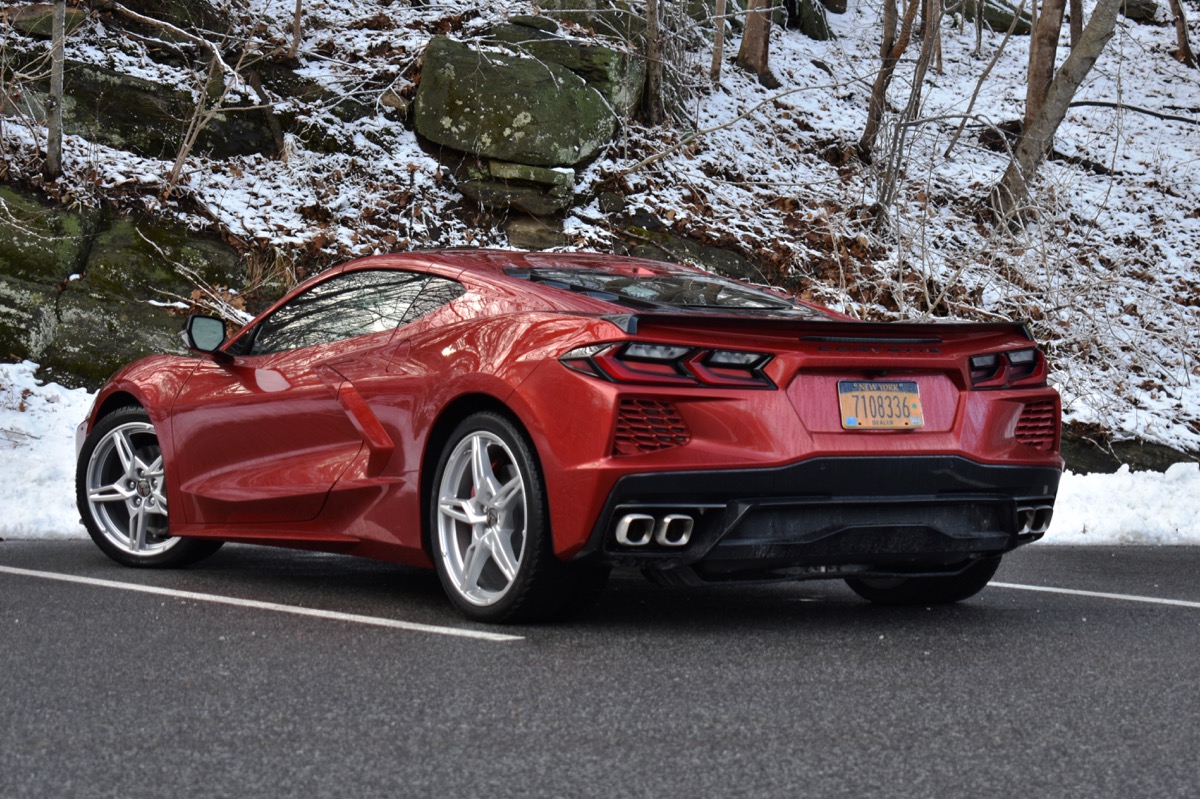 While cylinder deactivation allows the V8 engine to run as a V4 in certain situations, the Chevy Corvette isn’t what you would call thrifty. Natural Resources Canada fuel consumption ratings are 12.6 litres per 100 kilometres combined (15.1 city, 9.6 highway) for all versions. Over a week of driving, we averaged 11.8 L/100 km, according to our test car’s trip computer.

That pricing structure doesn’t leave much direct competition. For similar money to a base Corvette, you could have a base Porsche 718 Cayman, a car perennially praised for its handling, but lacking the Corvette’s muscle. The entry-level Cayman has a 2.0-litre turbocharged four-cylinder engine making 300 hp, and can do zero to 96 km/h in 4.9 seconds, according to Porsche.

The six-cylinder, 382-hp, Toyota GR Supra 3.0 starts at just under $68,460, making it a somewhat more affordable alternative to the Corvette and Cayman, but it’s also a step behind those cars in terms of features and driving experience. The Supra’s BMW Z4 sibling is aimed more at luxury-car buyers than driving enthusiasts.

Alternatively, a new Corvette seems like a bargain compared to some high-performance sports cars. It will easily out-accelerate a base Porsche 911, and is about as quick as a Nissan GT-R, both of which cost tens of thousands of dollars more. It also offers some of the drama of mid-engine supercars like the Audi R8, Ferrari F8 Tributo, Lamborghini Huracán, and McLaren 570S for a fraction of the cost. You don’t get the prestige badge, or as much polish, but the Corvette is the only new car of its kind that can be considered a value proposition.

What's your take on the 2022 Chevrolet Corvette?

Have you driven a 2022 Chevrolet Corvette?

Looking for a Used Corvette in your area?

How Best To Store A Vehicle

how best to store a vehicle for up to 6 months