Looking for a New Chevrolet Trailblazer in your area?

A new small crossover SUV sourced from South Korea, the 2021 Chevrolet Trailblazer offers stylish design and plenty of technology at an affordable price. 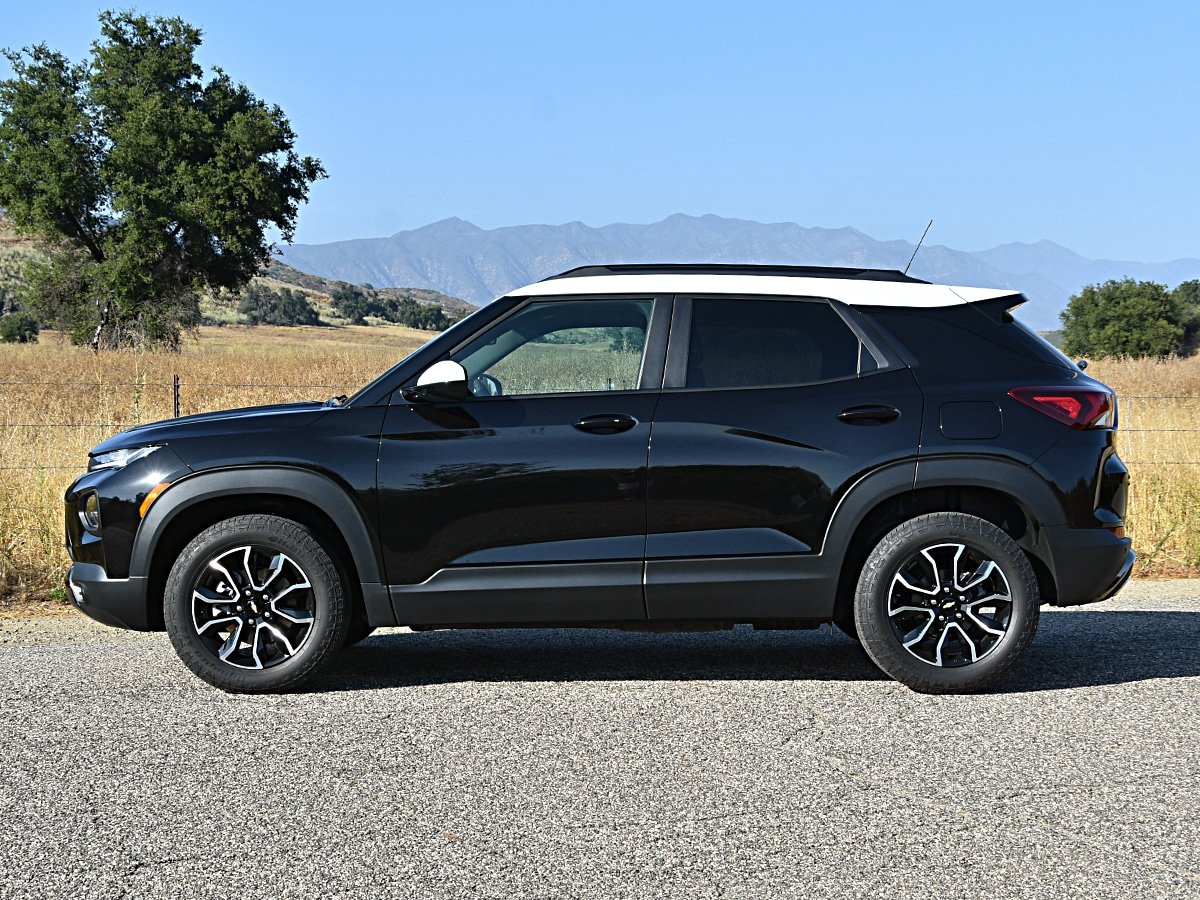 Concluding that it cannot compete for a shrinking share of the traditional car market, Chevrolet is going all-in on SUVs. The new 2021 Chevy Trailblazer is the latest addition to the automaker’s sport-ute lineup, slotting in beneath the popular Equinox as a new entry-point for younger and more cost-conscious consumers. In Canada, it comes in LS, LT, Activ, and RS trim levels, the latter two sold with a standard all-wheel-drive system. 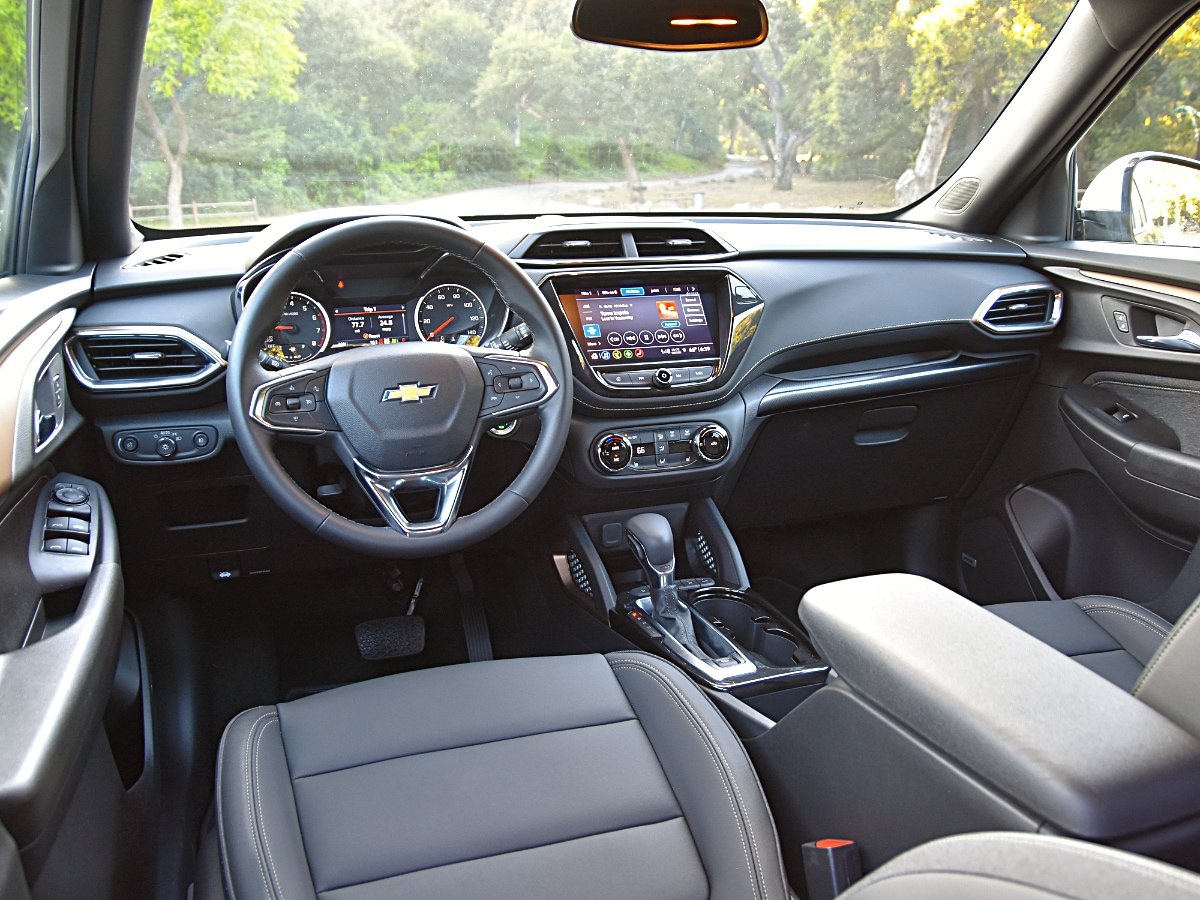 Our test vehicle had Activ trim, which equips the Trailblazer with a more rugged appearance including front and rear skid plate trim for the bumpers, unique 17-inch aluminum wheels, “sport terrain” tires with all-season tread in the middle and knobby all-terrain-style tread on the outer edges, a larger grille, and standard two-tone paint.

Equipped with the Convenience, Technology, and Driver Confidence option packages, our Trailblazer Activ window-stickers at $35,783 (Canadian, estimated), including a destination charge of $1,900. It had Mosaic Black paint, a Summit White roof, and Jet Black leatherette seats with Arizona (bronze) cabin accents.

Interior design is excellent, from the control layout and displays to the useful storage and natty detailing. In particular, we liked the white-stitched charcoal-coloured cloth used on the door panels and to accent the seats; it reminded us of something Volvo would employ.

There is, however, plenty of hard shiny plastic inside of the Trailblazer. While this is acceptable at the SUV’s base MSRP of $23,898, once the cost climbs past $30,000 it is harder to justify. At a minimum, Chevrolet needs to coat it with a matte finish. Or something. 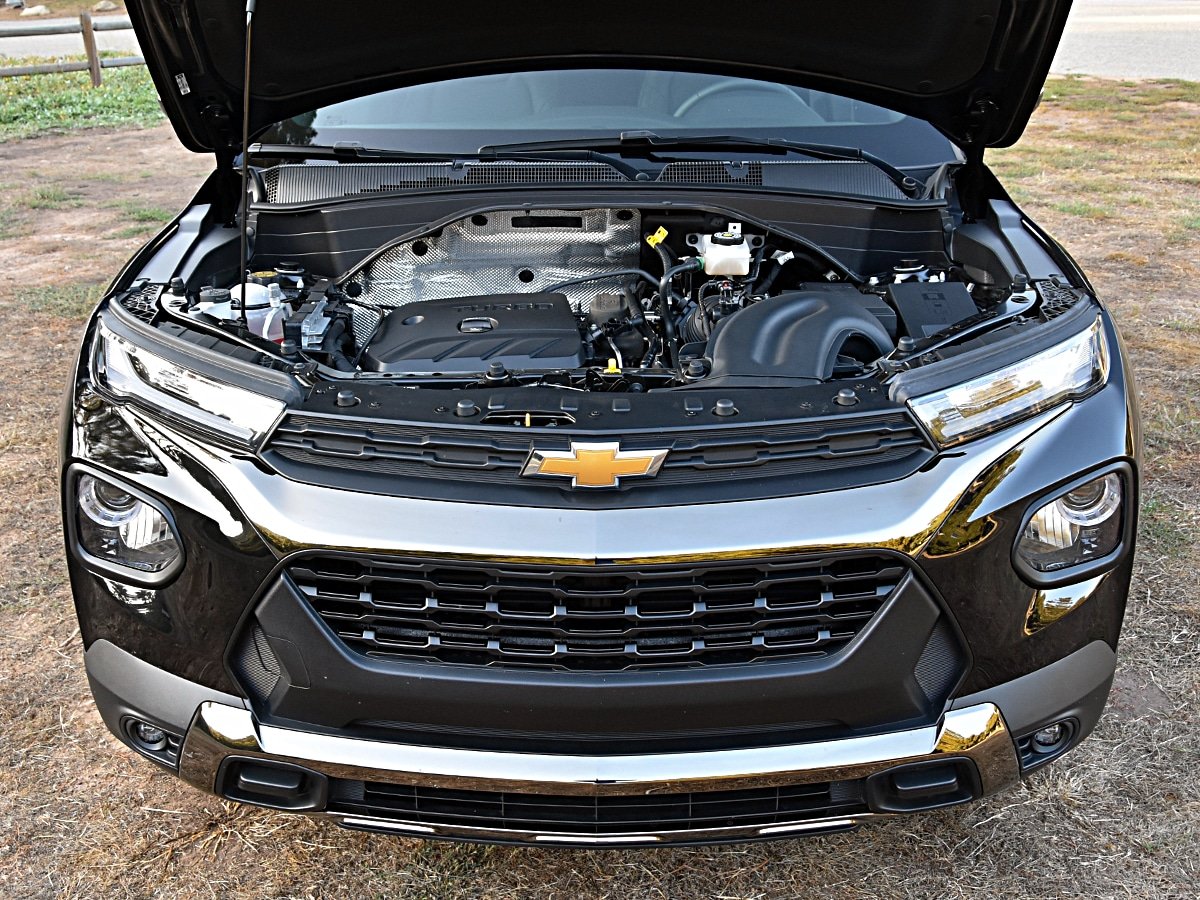 A turbocharged 1.2-litre 3-cylinder engine is standard in the front-wheel-drive (FWD) Trailblazer LS and LT. It makes 137 horsepower and 162 pound-feet of torque and is offered only with a continuously variable automatic transmission (CVT).

All other versions of the SUV get a more powerful drivetrain featuring a turbo 1.3-litre 3-cylinder engine good for specs of 155 hp and 174 lb-ft of torque, paired with standard AWD and a 9-speed automatic.

That’s right: three cylinders. It sounds dire, but in use, the Activ AWD’s powertrain is agreeable. The torque kicks in at a low 1,600 rpm and is available all the way to 4,000 rpm, and it twists the steering wheel in your hands a bit unless you activate the AWD system by pressing the button on the centre console. The nine-speed automatic supplies fast, smooth gear changes during part-throttle acceleration, and choosing Sport mode quickens the SUV’s responsiveness.

A Trailblazer is not going to win any drag races, but it supplies enough power under most driving conditions to keep the Trailblazer from holding up traffic. After a tight left-hand curve followed by an uphill section of the road, it laboured to gain speed. Later, during a highway climb up a mountain grade, the transmission held a lower gear and easily maintained speed. And a turbo engine is always a benefit in vehicles used at altitude.

On the testing loop, the Trailblazer Activ AWD averaged fuel economy of 8.8 litres per 100 kilometres, coming in a little short of the official Natural Resources Canada rating of 7.6 L/100 km in combined driving. This result is not due to aggressive driving, because while the Trailblazer exhibits excellent roll control, nicely weighted steering, perfectly calibrated brakes, a rather firm but unfiltered ride, and decent grip, it is not a vehicle that encourages rapid transit from where you are to where you want to be.

There are plenty of quirks to the Trailblazer’s driving dynamics. For example, in Normal mode, the transmission hesitates before delivering a downshift when the driver requests more power. Choosing Sport mode resolves this.

On-centre steering feel is rather disconnected, and as you come to a halt it can suddenly go light and slack. This is not a danger, just a characteristic that regularly calls attention to itself.

Suspension impact harshness is a real issue with the Trailblazer, especially over sharper bumps and holes in the road. While the ride is firm, the little Chevy required extra care when traveling over speed humps, lest the front suspension fully extend with a loud “boom!” We had to keep speeds down a full 15 kilometres per hour compared to a Nissan Qashqai.

Though it looks the part of an off-roader, the Trailblazer Activ is best kept to the gravel roads on which Chevy claims it excels. As we discovered during a quick jaunt on a short trail, care is necessary even with the Activ model’s underbody skid plate and improved ground clearance.

Also, if you spend lots of time on the highway, know that the Trailblazer is loud inside. You might wish to examine the Trailblazer’s corporate twin, the Buick Encore GX, instead, which is “QuietTuned” to make the drive more enjoyable. 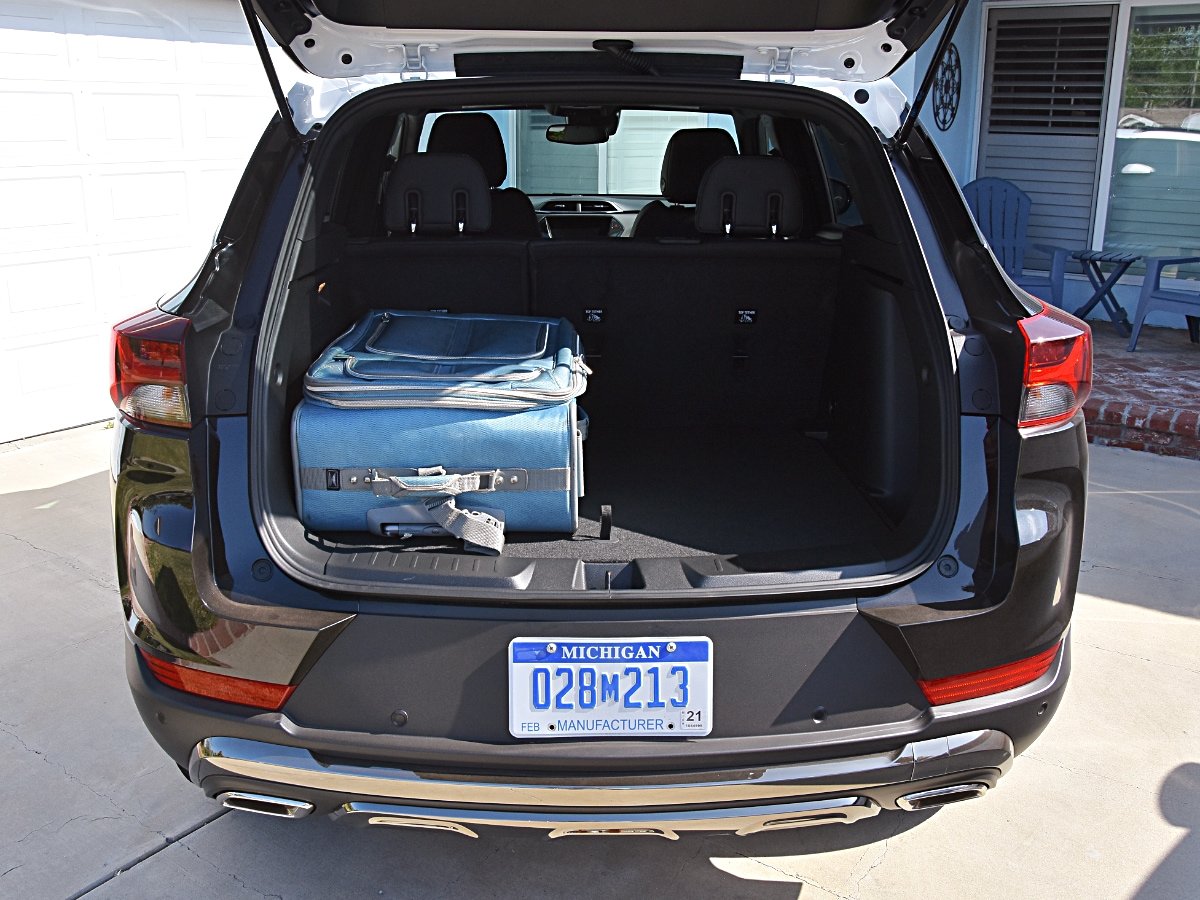 Some people prefer cloth seats. They’re nicer during the winter, for example. Chevy offers cloth seats with LS and LT trims in Canada, which means that unlike our neighbours to the south, you can get that material with the more powerful engine and with AWD.

The leatherette on higher trims is nice enough, but this material tends to trap sweat. And since our test vehicle’s automatic climate control system had trouble keeping the Trailblazer’s cabin cool, we were never completely comfortable. Especially when the automatic engine stop/start system turns on, the AC immediately goes limp. But even when driving, it cycles between tepid air and cold air.

Our discomfort was no fault of the front seats. They’re fine, especially given the test vehicle’s 10-way power adjustment for the driver's seat. And, though the front passenger seat lacks height adjustment, it provides good support.

The Trailblazer’s rear seat is another story. Though it has plenty of legroom, the cushion is as flat as a park bench and, in combination with an oddly reclined backrest position, the back seats are as welcoming as a bus stop shelter. Make that a bus stop shelter in Phoenix, in July, given the lack of air conditioning vents for rear passengers and the system’s overall tepid performance.

On a positive note, that flat back cushion translates into a flatter cargo floor when the seats are folded down. Doing so expands the cargo space from 716 litres to 1,540 litres, which is on par for the small SUV segment. Plus, the front passenger’s seat folds down, giving the Trailblazer more than 2.5 metres of cargo-toting length with the rear hatch closed. A hands-free liftgate is an extra-cost option on the Activ and RS trims.

Just keep in mind that the trunk measurement must include the space under the cargo floor. Otherwise, it makes no logical sense. 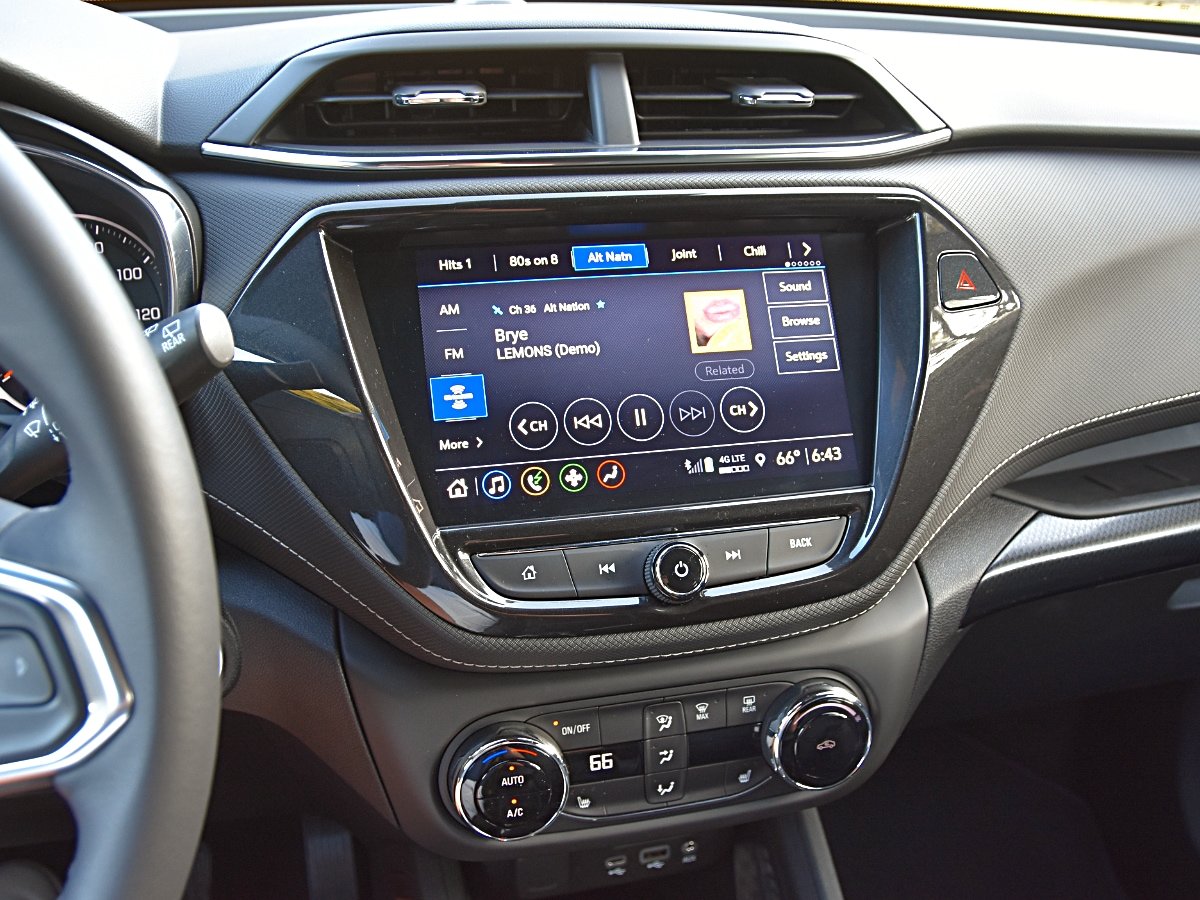 That’s a pretty good setup, but the upgraded version offered as an option for the Activ and RS trims is even better. It includes a larger 8-inch display plus wireless Apple CarPlay and Android Auto, SiriusXM 360L satellite radio, and cloud-connected vehicle personalization functions.

Additionally, the Trailblazer offers both USB-A and USB-C charging ports, wireless smartphone charging, and a 7-speaker Bose premium audio system. Does Chevy have its target market pegged? We’d say so.

Our favourite thing about the infotainment system is the simple, intuitive interface. You don’t need to crack open the owner’s manual to understand this technology, and the row of physical controls represents a model user experience: knob for power and volume, flanked by tuning buttons, with Back and Home buttons anchoring either end. Perfection.

Our test vehicle also had the Bose premium sound system, which, once cranked up to half volume, was able to drown out the road racket, wind noise, and constantly blowing air conditioning fan. 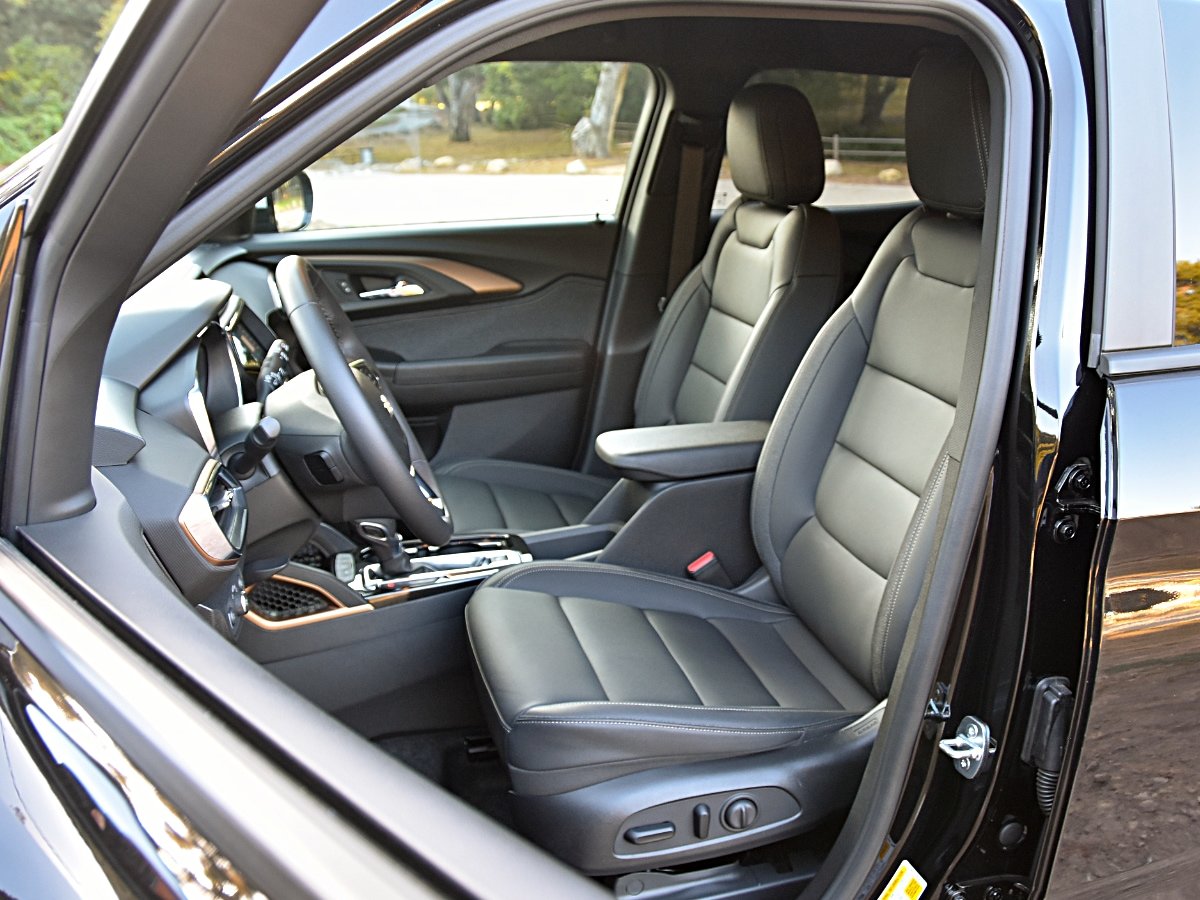 Chevrolet also loads the Trailblazer up with standard safety features. In addition to 10 airbags, this SUV includes standard Chevy Safety Assist, the new name for the company’s collection of advanced driving assistance systems.

Whew! That’s a ton of safety tech. So, how does it work?

While driving through a tight, sun-dappled S-curve, the forward collision warning mistook something for an obstacle ahead. Otherwise, it remained silent.

Later, on the highway, the adaptive cruise control revealed itself to be both over- and under-reactive. On the medium gap setting, when another vehicle changed lanes in front of the Trailblazer, the SUV would brake too much, irritating drivers piling up behind it. And when traffic ahead cleared, the SUV was slow to respond and accelerate back up to the pre-set speed.

Also, we found the lane departure warning and lane-keeping assist system to be inconsistent, letting the Trailblazer wander from a lane at times with a warning or corrective steering.

The Insurance Institute for Highway Safety (IIHS) rates the 2021 Trailblazer as a Top Safety Pick+, docking it slight points for the headlights on some grades and ease of use on the LATCH connectors for child seats. The National Highway Traffic Safety Administration (NHTSA) gives it a five-star safety rating overall and a four-star safety rating for rollover resistance. 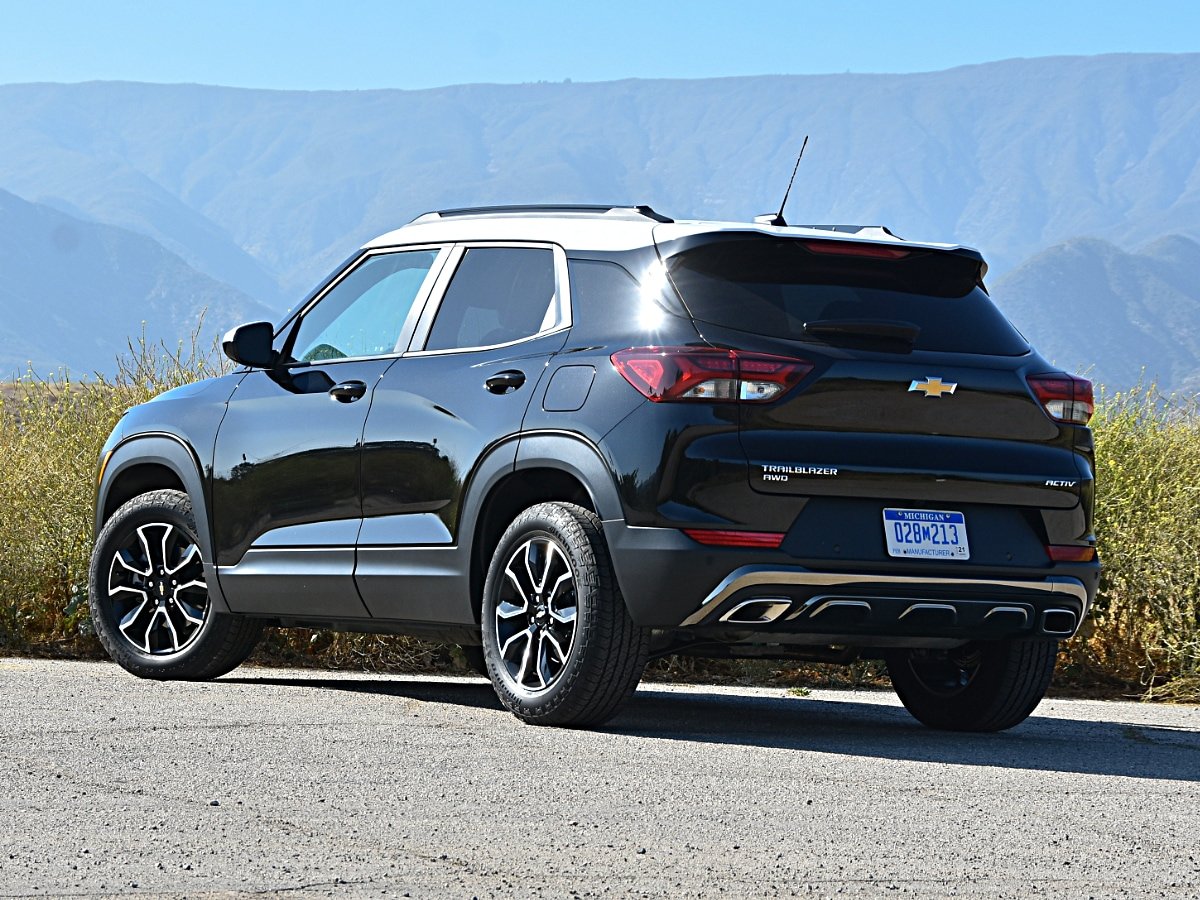 With the 2021 Chevy Trailblazer, you do get plenty of style and technology in a decent-to-drive crossover SUV. However, when you stack the Trailblazer up against arguably more appealing vehicles like the Hyundai Kona and Kia Seltos, each of which offers significant value and superior performance, the Chevy’s cost-effectiveness quotient suffers dilution.

Nevertheless, the all-new Trailblazer is a better vehicle than the aging Trax and will no doubt find favour with people seeking an affordable SUV with an “Activ” lifestyle image.

What's your take on the 2021 Chevrolet Trailblazer?

Viva_la_Niva If it's not the one with the capital B, then why did you give it a capital B in the title?

Exponent9 Which trail is this ‘blazing’? In the automotive landscape, this is a completely forgettable also-ran; vehicular pablum. In the geographical landscape, this thing won’t crawl over a rock larger than pea gravel. The Trailblazer will only serve a gullible few who need to feel adventurous and rugged, while fording a pothole, on their way to buy a large mocha latte.

Have you driven a 2021 Chevrolet Trailblazer?

Looking for a Used Trailblazer in your area?

2021 RS Trailblazer Touchscreen Not Lighting Up

I just purchased the 2021 RS Trailblazer. What would cause the touch screen not to light up? The car only has 200 miles on it?

14 views with 1 answer (last answer about a year ago)